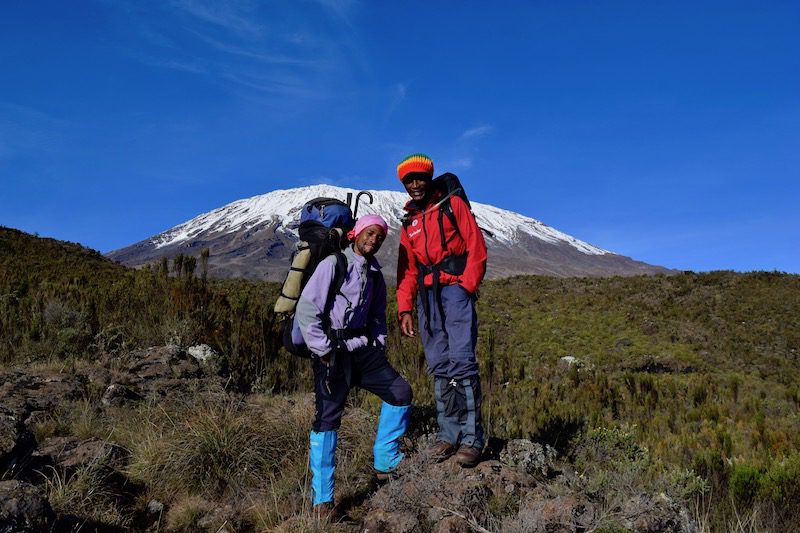 Will I Die When Climbing Mount Kilimanjaro?

Will I Die When Climbing Mount Kilimanjaro? This was a genuine question that I had prior to commencing my ascent. Perhaps it’s because I’m a mum now, or maybe it’s because I’m getting older and ‘wiser’, I don’t know. Either way, I was a little bit concerned. And I was right to be. Somebody DID die whilst I was on the mountain, in fact I was probably only feet away from the unfortunate cook’s defrosting body upon starting my final ascent….

That’s right, it’s not only tourists who die on the mountain, it’s the workers too. In fact, back in the early noughties the Tanzanian government was so concerned about the number of worker deaths that they imposed strict regulations on working conditions. I know this because my husband climbed the mountain back in 2001 when things were very different, and far more dangerous. Back then you carried all of your bags- wow, if I had to carry all of my luggage I did I WOULD have died! The porters also carried extremely heavy amounts, which is very dangerous when your body is already probably struggling as a result of the additional pressures of working at high altitudes. Nowadays, your porter will carry your luggage up to a maximum of 15kg (and they have weighing scales at all of the major camps where this is monitored). This requires some careful packing on the tourist’s part- see my Kilimanjaro packing guide for more on this.

So lets put it into perspective. According to UltimateKilimajaro.com there are approximately 1,000 people evacuated from the mountain every year and approximately 10 deaths are reported, although the actual number of deaths is believed to be two to three times higher. This is generally due to altitude sickness, which can strike anybody regardless of physical abilities and health.

Nobody knew exactly why the cook died on the mountain when I was there. We were extremely lucky on our ascent as the weather took a turn for the better after several days of intense snow and freezing conditions. This caused some of the snow to melt and for the body of the cook to be seen. He had gone missing 11 days before and his colleagues had been searching for him on the mountain. His body was found inside the crater close to Gilman’s Point, just a few minute’s walk from the peak. Nobody know why  he had ascended to the top of the mountain, he had obviously gone alone, perhaps in a delirious state resulting from altitude sickness. This isn’t the first time I’ve seen death on the top of a mountain. When I climbed Mount Toubkal I saw the ruins from the 1972 Atlas Mountains air crash– we could even see the skeletons buried beneath the rocks! When you see things like this it really brings home how dangerous mountain climbing can be- deaths are not just statistics, they are a reality…

Knowing how dangerous the mountain can be definitely contributed to my love-hate relationship with Kilimanjaro, but I guess in a way it did make it a bit more of an adventure and a challenge. I was fairly confident I wouldn’t die because I’d done my research, packed everything I needed to survive the cold nights etc and I booked with a great tour operator. Tro-Peaks Adventures really took care of us and it was reassuring that they would periodically check our pulses and oxygen levels etc to ensure that we were fit and well.

Will I Die Climbing Mount Kilimanjaro?

So in answer to the questions ‘will I die when climbing Kilimajaro?’, the answer is probably not. BUT you do need to take the right precautions and be sensible. There are a lot of rogue companies who offer cheap climbing packages who do not take safety as seriously so it is important that you research your company first. RIP to the poor cook who sadly lost his life on Kilimanjaro 6/04/18.

What safety precautions do you recommend when climbing mountains? Leave your comments below!

Want to hear more about my climb? Click here to read about my love-hate relationship with Mount Kilimanjaro or watch my YouTube video below!