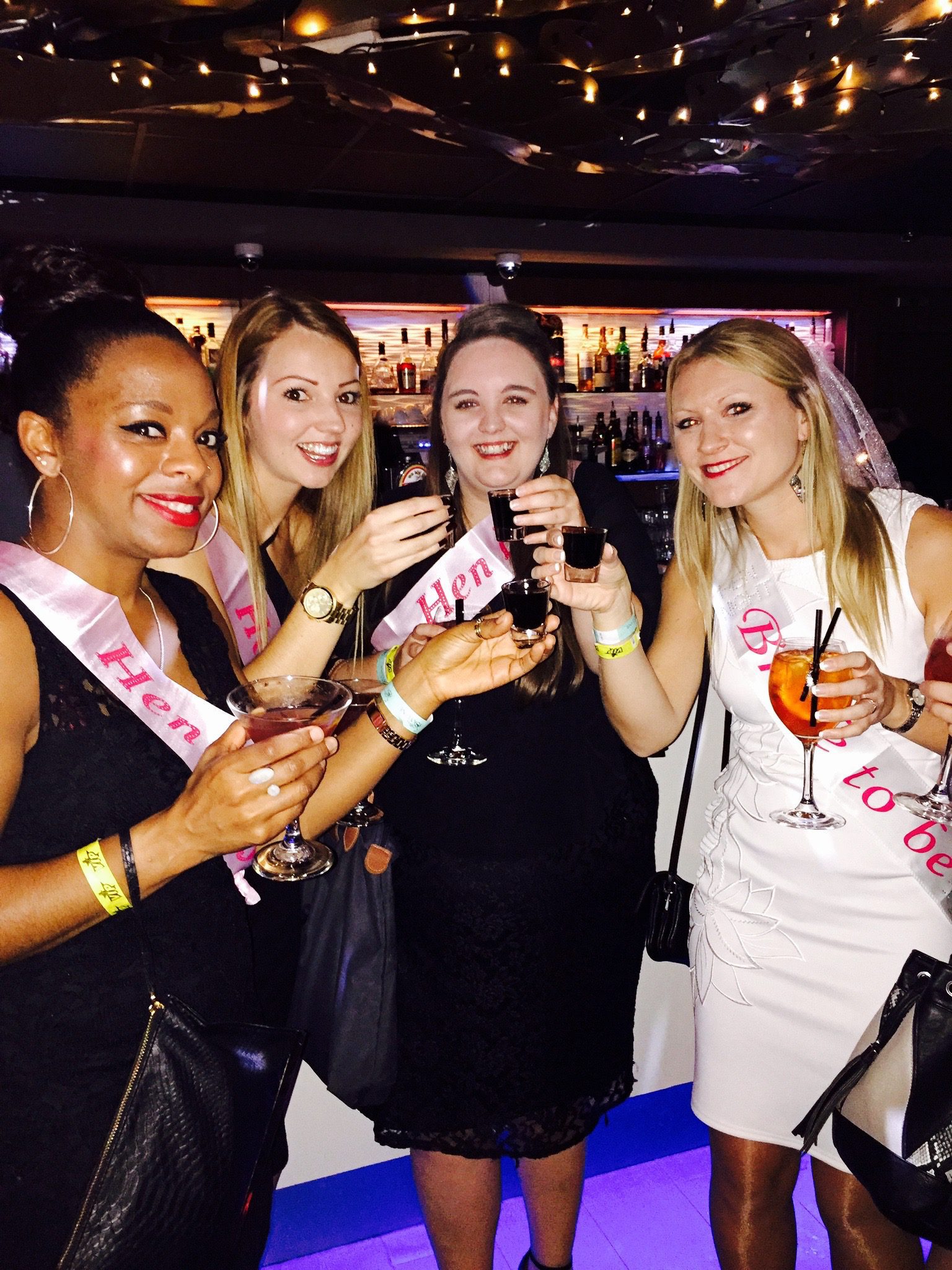 Why it’s not just for Stags: My Riga Hen Party

Not long after announcing our engagement I began to plan the two most important things in order of priority: 1-our honeymoon, 2-my Riga hen party (yes, yes for most brides it would be the big day itself…but I never said that I was ‘most’ brides!). Being in the ever state of wanderlust that I am, staying in the UK was not an option. The honeymoon was easy, I knew what my husband-to-be and I liked and we already had some ideas down on paper even pre-proposal (I will blog about this soon). Choosing a destination for the hen do however, was less straight forward. Being the eternal traveller it’s a given that many of my friends are similarly inclined. I wanted to choose somewhere that would excite my hens as much as me so choosing a destination that none of us had been to was a challenge, coupled with battling with holiday dates, prices and ensuring the appeal factor suited everybody (from my younger sister to mother-law-to-be) I was in for a difficult ride!

The tradition typical lies with the maid of honour and I didn’t want my sister to miss out, but being the travel-control-freak that I am I just couldn’t hand the entire job over to her. So I decided to research my options, book flights and get everybody on-board and then hand it over to her to do the rest. I will admit, I did feel a little anxious about this, not because I didn’t trust her but because I’m not particularly comfortable when I’m not in control of my travels! But she had all of my friends to help her out too, many of which have just as much travel experience as me so I knew I was in safe hands.

Here’s why I chose Riga and why I wouldn’t have changed it for the world!

I knew that the higher the cost, the less hens I would have, so it was important to keep the costs down from the start. I managed to book flights with Ryan Air for approximately £70 each which I thought was an absolute bargain-the days of finding super cheap low cost flights to somewhere you actually want to go on a date you actually want to go there are long gone! I had also researched the cost of living in Latvia and found that Riga was really good value for money. There is loads of bargain accommodation to choose from too. We were away for 3 days and 2 nights and I spent less than £200… that included all of my food and LOTS of drinks! You could easily spend that in one night in London so I thought that was brilliant.

What I loved about Riga was that none of my friends (except one-there’s always one!) had been to Riga before. There were 10 of us and at least half of us had been to most major cities in Europe so it was tricky to find somewhere new. I loved that Riga had some history and that I learnt a bit about Eastern Europe (somewhere I’d not yet ventured to). But at the same time it wasn’t too steeped in culture that I would miss anything in my inevitable drunken (and then hung-over) state. It was a pretty, although a little run down, city that had some nice open areas and monuments. There were also lots of things to do…

Riga has lots of day-time activities

Lets face it, it’s not ALL about drinking on a hen weekend, you want fun stuff to do in the day too! One of the reasons I was interested in Riga was because of the activities that I thought my friends and I would like. On our first day we had some chill out time and a chance to sightsee and had a look in the museums and went up a cathedral where there was a great viewpoint. Yes, yes OK I know that sounds very prim and proper…but you can’t visited a city without seeing the top sights! Oh and we also ate dinner at a really cool underground medieval restaurant!

The second day we went quad bike riding out in the forest which was great fun! Then on the third day, when we were all feeling a little worse for wear, we went to a spa just outside of the city centre which was absolutely fantastic, it had several types of steam rooms, a couple of different saunas, waterfalls, a bar, a Jacuzzi and we even had a facial treatment thrown in-just what us girls needed after two hard-core nights out on the town (see point number 4)! There was also the option to go bob-sleighing which was something that particularly excited me but unfortunately we were visiting at a time when the national team needed the slopes to train. Never-mind, all the reason to return at some point!

On the first night we went to the Skybar, a bar at the top of the tallest building in Riga. It was a really nice place and was rather classy! We arrived there already a little tipsy as we started the first night off with some cocktail making classes, we had one of the main bars all to ourselves with our own private lessons… we definitely got that cocktail shaking down to a fine art! The cocktails went down a treat, none the less because they were VERY strong… We then had a good dance at the Skybar and continued to drink into the early hours. I was drinking some kind of European cocktail that was orange… no idea what it was but it was different from what we had at home and came in a wine glass=winner! We were also given a welcome shot of something black which was apparently the traditional drink in Riga. Despite vowing I would never again drink shots (after a previous alcoholic binge session) I tasted the local delicacy and confirmed that, yes, it was disgusting! On this night I put on my new bride-to-be white dress and my sister, the maid of honour, bought me lots of goodies including my sash and vail- I loved them!

The night was hilarious, despite being up almost 24 hours by the time we got to bed, we had so much fun! The funniest moment of the night was definitely my mother-in-law-to-be, not only did I not realise how much of a mover she was on the dance floor, but also how hilarious she could be with the dance-offs she was having with various random people throughout the night! It was honestly one of the funniest things I think I’ve ever seen and everybody was excited post-hen do for a repeat at the wedding!

The weekend continued much along the same lines the following evening, except we decided to head down the the main strip of bars this night. The highlight was most definitely our attire for the evening- we were cabin crew!!! My sister and the rest of the hens had all bought outfits and surprised me on the day- what a fantastic idea! Of course I was a little suspicious when I had been told to pack only one evening outfit, but I hadn’t guessed we would all be dressing up as cabin crew (for those of you who might not know, I used to work as cabin crew). The outfits were fantastic, and the attention we got all night was even better! We went from bar to bar and barely paid for a drink all night! We had people taking photos with us, buying us drinks and even clearing the bar for us so we could take this cheeky photo!

The bars were great, we were out until the early hours of the morning, drinking, chatting and singing karaoke! Two of the hens even pulled… as a married woman now it is my mission to find nice men for my single friends on a night out! Haha That brings me to point number 5…

Riga has sooo many men!

OK, no there’s a reason for the title of this blog ‘Why Riga isn’t just for Stags’- because stag parties make up the majority of tourists in Riga! I have honestly never been somewhere where the number of women have been so limited, men were everywhere you looked… men were even queuing for the bathroom instead of women (now that’s something I’ve never seen before!)! We got so much attention the entire weekend, not only because we were dressed up in our sexy cabin crew outfits, but because we were in high demand! For my single friends it was absolutely brilliant, they had their pick of the bunch if they wanted it! And for us girls that were not available, it was a really good laugh chatting and dancing with everyone! Most of the men were from the UK and were generally more drunk than we were, many of them believed we were generally cabin crew, I know the outfits were great but did we really look like we had just got off a flight!? One group had genuinely lost his stag and then reappeared several hours later so say that he had been in prison since the previous night! Oh dear…

So, that pretty much sums up the highlights (of what I can publically post at least!!) of my hen do. I most certainly started as I meant to go on in typical un-traditional Stainton style… If you’re reading this blog because you are considering organising your hen do (or stag do) you should absolutely do it! I hope you have as much fun as I did!