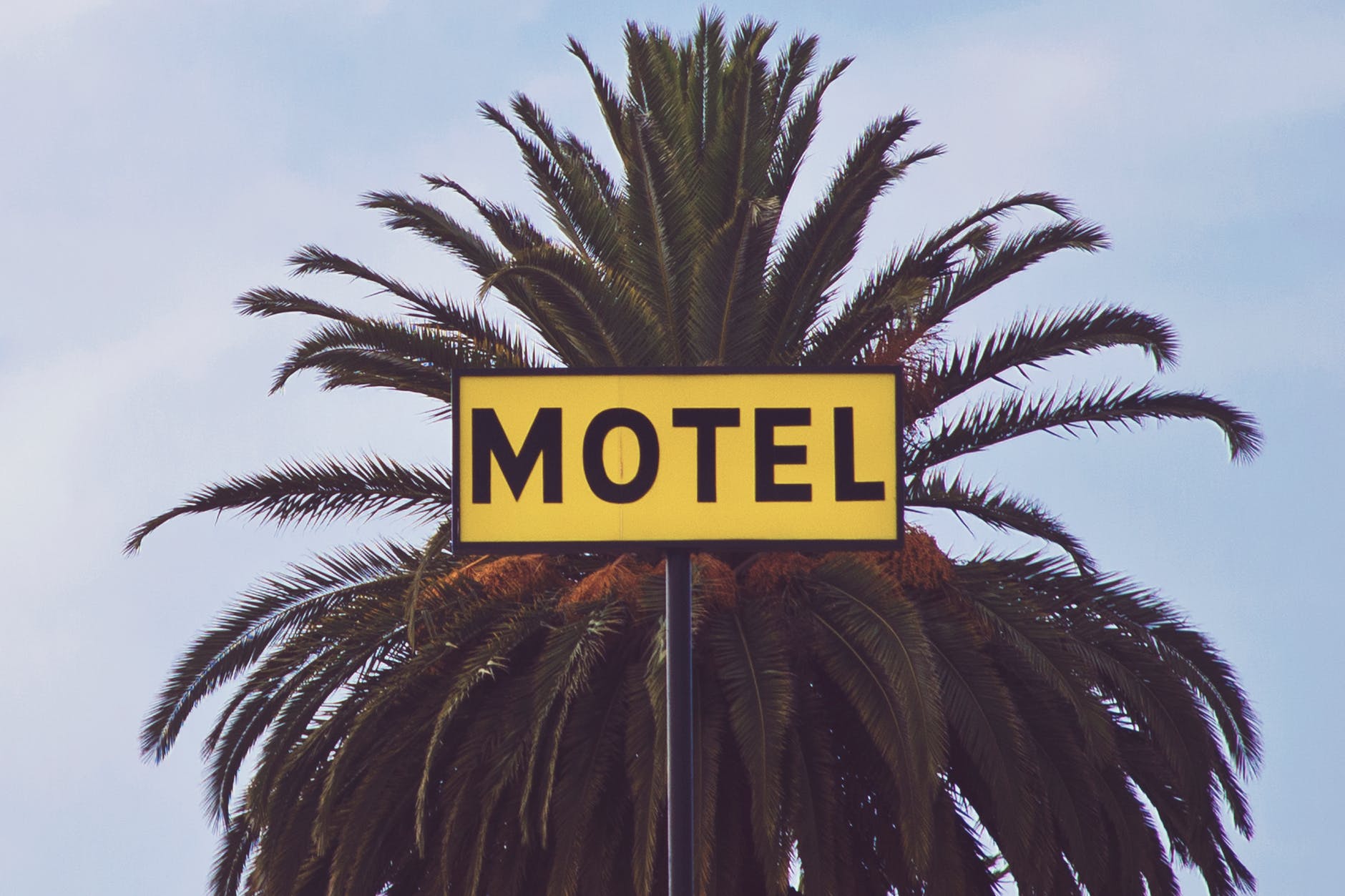 What is a motel? | Understanding tourism

What is a motel? Well, if you are from the USA then you probably know the answer to this question, because the USA has lots of motels! However, if you reside elsewhere in the world, you may not be so familiar with the concept. So, in this article I will tell you all about what is a motel and give you an overview of the motel industry.

What is a motel?

Motels are a popular type of accommodation, particularly in the USA.

A motel is defined as being a roadside hotel designed primarily for motorists, typically having the rooms arranged in low blocks with parking directly outside.

The word came into common use (at least, it appeared in dictionaries) after World War II. It is a portmanteau of ‘motor’ and ‘hotel’.

The word is said to have originated from the Milestone Mo-Tel in San Luis Obispo, California, USA. This was built in 1925 and opened in December of the same year.

Most motels are individually owned rather than being part of a chain.

Long-distance car journeys started to become more common in 1920s America. This was thanks to the large highway systems that had been recently developed at the time – so a gap in the market opened for inexpensive and easily accessible accommodation for motorists to utilise.

Motels obviously needed to be close to the main routes across the country. This led to the growth of the motel concept, which surged in popularity over the years.

They were in high favour in the 1960s, but their popularity has dwindled since, because newer hotel chains have sprung up at highway interchanges.

The difference between a motel and a hotel

Location is a big part of the difference between motels and hotels.

We tend to find hotels in cities or at holiday resorts – though of course, there are some at airports and near motorways/highways now that motels are falling out of popularity. However, motels are only found in roadside locations.

Motels are low-rise buildings. This means they typically have less rooms than a hotel, but this wasn’t a problem when there was a lot of them on each highway. Roadside businesses in general were really trendy at the peak of motel popularity. These included gas/petrol stations, drive-in cinemas, diners, car dealerships and many more!

A motel also, by definition, has a car park/parking lot. This means that guests’ cars are easily accessible at all times.

Following on from this, motels are designed so that the doors face outwards (directly onto the parking lot, generally), rather than facing into a corridor like they would in a hotel. A motel is either one long building, or an L / U shape. They tend to have the guest rooms as well as a manager’s office and small reception area. Many have a pool, and some motels have a diner attached too.

A lot of motels are quite stand-out. This is definitely true of those built and opened in the years after World War II (early 1950s-late 1960s). Their designs would be bright and colourful, and they often featured neon signs or had a theme. If you were to drive down the USA’s Route 66 you would see many motels with bright neon signs – cowboys, rockets and many more…

As with the different types of hotels, there is some variety when it comes to motel rooms.

Most motel rooms are just basic rooms with a double bed or two singles, and a private bathroom. They tend to also feature a desk and chair area, with many having a TV and telephone too.

Some motel rooms are bigger, with a kitchenette built in and more space – these are obviously charged at a higher rate. Many motels also feature adjoining rooms with doors between them; this is definitely more common in a motel than in a hotel. Very rarely you’ll find honeymoon suites, with romantic extras included.

What are love motels?

You may have heard of a love motel, or even read about it here on Tourism Teacher. Love motels are a prominent feature of worldwide sex tourism.

In short, love motels are short-stay motels, often rented in order to allow guests privacy for romantic or sexual purposes. This type of motel room can be rented by the hour.

They tend to have more discreet entrances, and windows aren’t particularly common.

Love motels exist worldwide, but are common in Asian countries. The first love motel was built in Osaka, Japan in 1968. Love motels are a huge part of Japanese culture (and economy) to this day!

Motels in the horror genre

For example, Bates Motel (1987) is a supernatural horror film about a man called Alex West who inherits a motel from Norman Bates; it is said to be haunted by Norman’s mother, and her remains are found buried at the motel as well as those of her husband. The film was rebooted as a TV series which ran from March 2013 to April 2017 – but the series focuses on Norman Bates and his mother, set in modern day but as a sort-of prequel to the film. It is one of the most popular TV shows of the past decade!

Motels are a common feature when it comes to horror films. They feature in the following horror films:

…as well as many more! But why? “A hotel room is both a foreign space and an intimate space. We might sleep there, bathe there, have sex there, but it’s also somewhere unfamiliar and uncontrolled, and that creates a sense of vulnerability. Who’s to say there aren’t hidden cameras in the bedroom? How do we know the owner won’t come in while we’re showering? What if he has a knife? … It’s easy to imagine that something terrible is happening in the room next to us, or that one of the other guests is hiding a dark secret” says Brandon Cronenberg, as quoted in National Post.

Motels in other pop culture

Rosebud Motel is a prominent feature of the TV series Schitt’s Creek. Owned by the Rose family in the show, this is a real property in Orangeville, Ontario, that you can visit if you’re a big fan of the show. It becomes their home AND their business, and is overall a positive space. You can even buy Rosebud Motel merchandise…

Motels have been featured in The Simpsons, too. Their use is to somewhat parody the overwhelming link to the motel as a horror setting: for example, the Sleep Eazy Motel with its broken neon sign now advertising the ‘Sleazy Motel’. This shows that motels are often stereotyped as somewhere people go with bad intentions, although this obviously isn’t always true!

In the 2002 film Little Miss Sunshine featuring Abigail Breslin and Greg Kinnear, they stop off at a motel while on a long road trip. This is, of course, the primary and intended use of a motel. This one in particular is the Budget Inn in North Hills, California. You can book a night there and be within easy driving access of El Cariso Community Regional Park, the Warner Brothers Studio and so much more.

The best motels on Route 66

One of the most popular driving routes in America is Route 66. If you are planning to drive this route, here are some of the best motels you can stay in along the way…

Located on the portion of Route 66 in Cuba, Missouri, you’ll find this iconic (and historic) motel on Washington Blvd. Wagon Wheel was built in 1935 and has been open ever since. With jacuzzi rooms on offer, pets allowed in some rooms and some units sleeping up to 4, this is a great (and popular) option for Route 66 accommodation.

Still in Missouri (but this time in Springfield), this motel is also known as Rail Haven Motor Court. Marilyn Monroe and Elvis Presley both stayed here (in rooms 409 and 419 respectively) and the motel has been open since the late 1930s. Fairly modern, it is one of the best motels to stay in on Route 66.

You’ll find this place in Tucumcari, New Mexico. With its vintage neon signs and cool decor, it is another popular motel on Route 66. Rooms come with TV and radio, comfortable beds, free WiFi and more. Motel Safari has outdoor seating and a fire pit too!

If you’re looking for somewhere truly iconic to stay during your road trip then this is the one. The big blue bird is one of the most photographed parts of the driving route, and this motel itself is one of the most popular places to stay. It is also located in Tucumcari in New Mexico. The motel is full of nostalgia and has been operating since 1939. Rooms are basic and clean with period-style furniture, retro art work and more.

What is a motel? Further reading

Hopefully you can now answer the question ‘what is a motel?’. As you can see, motels are big business in the United States. But they are not so big in the rest of the world. Interested to learn more? Here are some articles that I think might interest you!

Wow, what an adventure this one is having in the U

Are you looking for happiness captions for Instagram? If so then you have come to the right place! So, you have the perfect shot that you want to share with your Instagram followers, but you're not sure what the caption should be? Well, finding the right caption can...

Tourism in Japan- What You Should Know When Traveling in Japan

Tourism in Japan is big business, not only does tourism in Japan make the country lots of money, but visiting Japan on your travels is a fantastic cultural and educational experience. In this article I will teach you all about tourism in Japan, why you should visit...

8 fun things to do in Whitley Bay

What are the top things to do in Whitley Bay? Whitley Bay is a traditional little English seaside town, located in Northumberland. It is the perfect place to visit if you're interested in having a relaxing seaside getaway in the UK - as there are plenty of fun things...

What is health tourism and why is it growing?