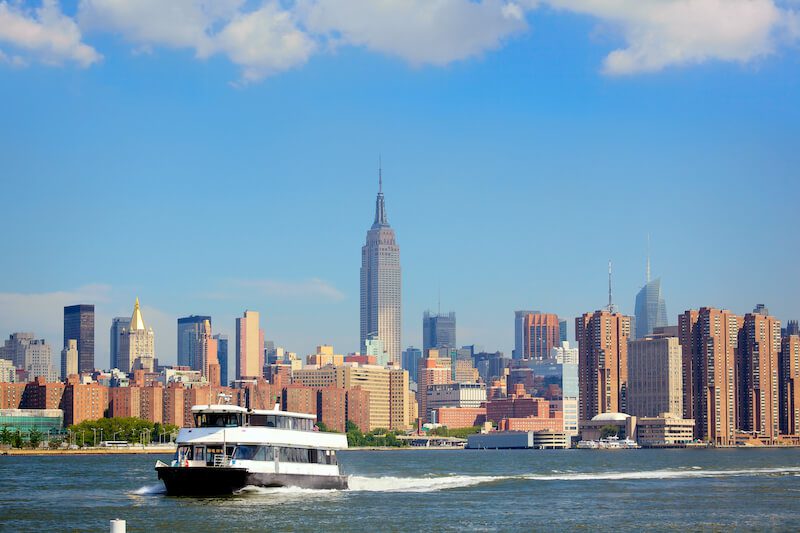 One of the main types of water transport is a boat. This is the most likely form of vehicle you would use to travel on water, regardless of whether you’re on a canal or in the middle of the ocean. However, there are of course a lot of different types of boats. We can generally split boats into three categories:

Each category has many boats within it, all serving different purposes.

These boats, as the name suggests, have a deck area. They are generally small, but have seating areas for groups of people – their main purpose is for leisure and sightseeing, or as a vessel from which to enter the water for swimming or other watersports. With a V-shaped hull, these boats are usually 25-35 feet in length.

A catamaran is a type of boat which has two hulls. They are generally small-ish boats used for fishing or cruising, but this style of boat has been known to be used for car ferries too given their stability.

As the name suggests, these are boats on which people live. They are not motorised because they are usually moored in one place, floating. Often they are built to look more like a house than a boat, but some definitely retain their boat style. You tend to find them on canals or larger lakes, and many people live in houseboats year round. They are also rented out to tourists looking for something a bit different!

These small open boats are an entry-level kind of vessel, used for casual boating and sporting activities. They have a steering wheel and small control panel.

A lifeboat is a small rigid or inflatable boat, generally attached to a larger boat or ship, used for sea rescue when necessary. Ships legally have to have a certain number of lifeboats corresponding with the number of people on board.

This type of boat is used mostly on inland waters, and they are incredibly stable due to their wide and flat shape. They rely on tubes known as pontoons to float on the water. With sensible seating, they are used for sightseeing and fishing.

A barge is a type of water transport used on canals – it is also often called a canal boat. They are long and flat-bottomed, and used either for carrying cargo or as recreational passenger boats. The insides can fit beds, kitchens, seating areas and more.

An airboat is a small, flat-bottomed vessel which is powered by an aircraft-style propeller. They are used for tourist and fishing purposes in marshy and shallow waters – particularly the Everglades in Florida.

These are mostly used for tourist purposes now, particularly on the Nile. They are Eastern Mediterranean wooden sailing boats, seating around 10 passengers with 2-3 crew members.

A hovercraft is one of a few types of water transport which can also travel over land, through mud and on ice. They use special blowers in order to produce a large volume of air under the hull which is slightly above atmospheric pressure – this lifts the vessel allowing it to move. They have many uses.

This is a small narrow boat propelled by the use of double-ended paddles. They are most commonly used for recreational purposes on small bodies of water.

A liner is a very large boat designed to transport cargo or passengers long-distance from point A to point B, usually without stopping unless there is a need to refuel. They are generally not used these days, with flying being the optimal choice. The RMS Queen Mary 2 is the only ocean liner still in regular use, often completing trans-Atlantic journeys.

There is no standard definition of a yacht but they are generally 33ft+ in length with overnight facilities, used for pleasure and usually the height of luxury. You tend to find yachts moored at places like Puerto Banus in Marbella, or Cannes in France. People often make an activity out of celebrity-yacht-spotting!

A ferry is a type of boat generally used to carry passengers short-distance from A-B. They are used within waterside cities as public transport, such as the ferries in Venice or the ‘ferry across the Mersey’ in Liverpool. There are also ferries which travel a longer distance, from the UK to France for example, which also hold cars; these tend to have many more amenities on board such as cabins for sleeping, restaurants and bars, small cinemas and more.

This type of boat is small and flat-bottomed with a square-cut bow; it is propelled by the use of a pole which is pushed against the riverbed. The person doing this is called a ‘punter’, and they will be stood on the boat at the back. Punts are used for recreational purposes mostly.

Also known as a RIB, these tiny boats are – as the name suggests – rigid and inflatable. They are lightweight, high-capacity and unsinkable. RIBs are usually used as work boats; however, they are also used by scuba divers to reach dive sites which are in areas where larger boats can’t get to for whatever reason. They travel fast.

This is one of the most useful types of water transport because a ship’s tender is used to transport people or goods from a large ship to a dock, where there is not enough space to dock the ship itself.

A water taxi is used like land public transport to get people from one point to various other points. They will make multiple stops. Water taxis are used for commuting and also by tourists; you’ll find them in cities like Venice, Liverpool, Istanbul, Brussels, New Orleans and Budapest.

Other types of water transport

There are other types of water transport which are not technically boats, or are not referred to as such. This might be because they’re too big for that category, or too small, or simply operate in an entirely different manner.

A ship is a large water vessel, reserved for travelling the oceans. Ships generally have to be 95ft+ long; they can typically stay at sea for much longer than boats and, as the saying goes, a ship could carry a boat but a boat could not carry a ship. All of that being said, there is no set legal definition of a ship versus a boat.

There are many types of ships, including but not limited to:

One of the most well-known and exciting types of water transport is the cruise ship; they are, obviously, classed as ships – they are passenger carrying vessels, designed for staying at sea for an extended period of time. They differ from liners in that they stop at multiple ports as part of a round-trip. On board you’ll find a range of amenities including cabins, restaurants, shops, theatres, cinemas, bars, nightclubs, tattoo shops, water slides, go-karting tracks and much more. Not ever cruise ship has all of these, but this is just an example of how incredible cruise ships can be.

You can read more about cruising in my article, The 8 Major Types of Cruise.

A surfboard is a tricky one to categorise as one of the types of water transport, but it is listed on many websites as being a form of transport despite not generally being used to go from point A to point B in any way. A surfboard is a narrow plank used to allow surfers to ride a wave for fun.

A PWC is also known as a Jet Ski, which is actually a brand name (owned by Kawasaki) which has become synonymous with this kind of vessel. These differ from boats in that you stand or sit ON them, not in them. They are used for recreation mostly. However, law enforcement also use them due to their speed – and PWC fishing is a fast-growing industry.

And the last of the types of water transport is the submarine. These vessels are used for underwater exploration. There are small two-person submarines which can be submerged for a couple of hours, and there are massive submarines which remain under the water for up to 6 months. These vessels can go much deeper than human divers, allowing for discovery and anti-surface warfare.

If you enjoyed this article on the different types of transport then I am sure that you will love these too!