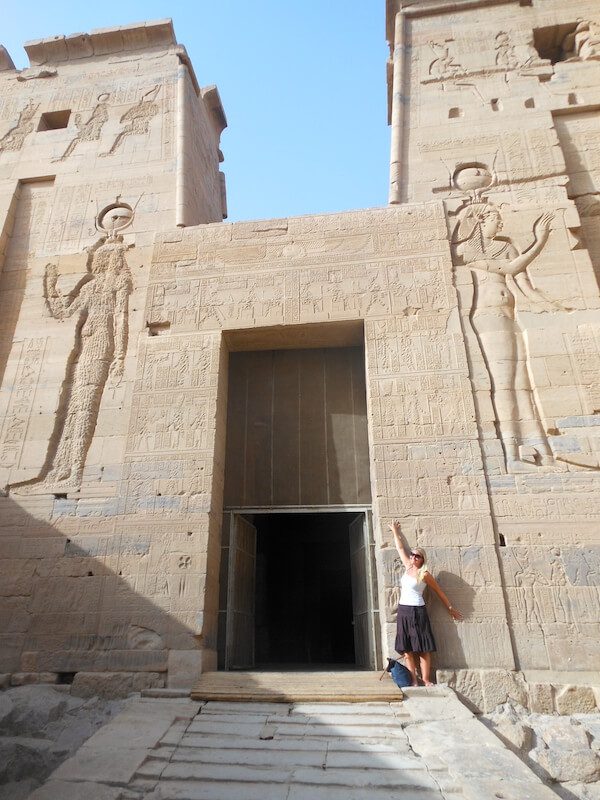 Visiting the Temple of Edfu: A complete guide

Where is the Temple of Edfu?

The temple lies on the west bank of the River Nile, in a city called Edfu. This is in Upper Egypt. The city of Edfu is between Esna and Aswan; it has a population of approximately sixty thousand. About 3 miles away from the city are the remains of some ancient pyramids.

There are a number of ways to get to Edfu. From Aswan it is a 2 hour drive, and from Luxor it is just over 2 hours. You can hire a taxi driver to take you to Edfu from either of these cities on either a half or full day trip.

There are also trains that visit Edfu from Luxor and Aswan. However, the trains are quite sporadic – they are spread out across the day.

History of the temple

The Temple of Edfu is a major Ptolemaic temple. It was built between 237 BC and 57 BC, and dedicated to Horus. It is said to be the most completely reserved temple in the whole of Egypt.

There are inscriptions on the walls of the Temple of Edfu that provide information about language, myth and religion during the era. There are details of the temple’s own construction, and scenes that relate to conflict between Horus and another god, Seth.

The current Temple of Edfu was built on the site of a much smaller temple, which had also been dedicated to Horus. Visitors today can still see a ruined pylon that is believed to have been part of the original temple!

The temple has had its fair share of trouble. Non-Christian worship was banned within the Roman Empire in 391, and thus the Temple of Edfu fell into disuse. Many of the statues and reliefs had their faces scratched away, as was common across Egypt, and the hypostyle hall of the temple has a blackened ceiling. This is likely due to arson, in an attempt to destroy religious imagery.

Did you know: Temple Works in Holbeck, Leeds, is modelled on the Temple of Edfu.

The temple was partially buried at one point. River silt from the Nile and drifting desert sand led to this – and by 1798, only the very top of the temple pylons were visible. But in 1860, a French Egyptologist named Auguste Mariette, started freeing the Temple of Edfu from the sand.

Visiting the Temple of Edfu

Edfu is a stop on many Nile cruises. You will have a couple of hours to explore the city, which is plenty of time to visit the temple. River boats dock around 3km from the Temple of Edfu, and you can take a caleche (horse drawn carriage) or a tuk-tuk. You may want to haggle!

If you are already in the area, simply make your way to the Temple of Edfu on foot or by one of the above methods. Entrance fees are as follows:

Tip: remember to bring some form of ID to qualify for the reduced student price!

There are organised tours that will take you to visit the Temple of Edfu, too. Most leave from Luxor and incorporate other temples too. Travelling by air-conditioned coach sounds absolutely ideal in Egypt’s hot climate! Having a guide with you helps, too, so you get to know a bit more of the history behind what you’re looking at. You can even combine visiting the temple with a hot air balloon ride, too…

With highs of 16-18°C between December and February, the coldest months are still fairly warm. In the summer it gets as hot as 34°C (July and August) so it’s never too hot to cope.

Some rain falls in January, April and May typically – but not a lot. The heat is quite dry, so pack clothes that will keep you cool such as thin shirts and dresses. Pack comfortable shoes, too, for walking around the Temple of Edfu!

There aren’t many places to stay in Edfu itself, meaning that you are better looking for accommodation in Aswan or Luxor. Here’s some more information…

The Mud House of Edfu, a traditional building that looks absolutely beautiful, has rave reviews about the location and those host, Mohamed. It is his home, with guest rooms built to the side. Free WiFi and parking are available, and the sense of authenticity is like no other. With outdoor seating areas, stunning decor and a host who’ll happily drive you to the Temple of Edfu, there’s no wonder this property is in such high demand!

For luxury in Luxor, 5 star Mercure Luxor Karnak has everything you need. A pool and spa, fitness and wellness centre, restaurant and bar – all the typical amenities are here. Dietary requirements can be accommodated, and the crisp, clean decor is stunning. With twin and double rooms as well as suites, you’re bound to find the right room for you. WiFi and parking are free, too.

Sofitel Legend Old Cataract in Aswan offers Nile views, a large pool, and four different bars and restaurants. There is a spa and sauna, and the building is beautifully Victorian. There are BBQ facilities, a 24-hour front desk, an airport shuttle service and more. Free WiFi and good coffee are notable points about this hotel. Previous guests praise the large rooms and fantastic staff.

Hopefully this post helps when planning your trip to the Temple of Edfu and the surrounding area. Egypt is full of exciting things to see, and the temple is one of the best in terms of getting an insight into what everything looked like in ancient times.