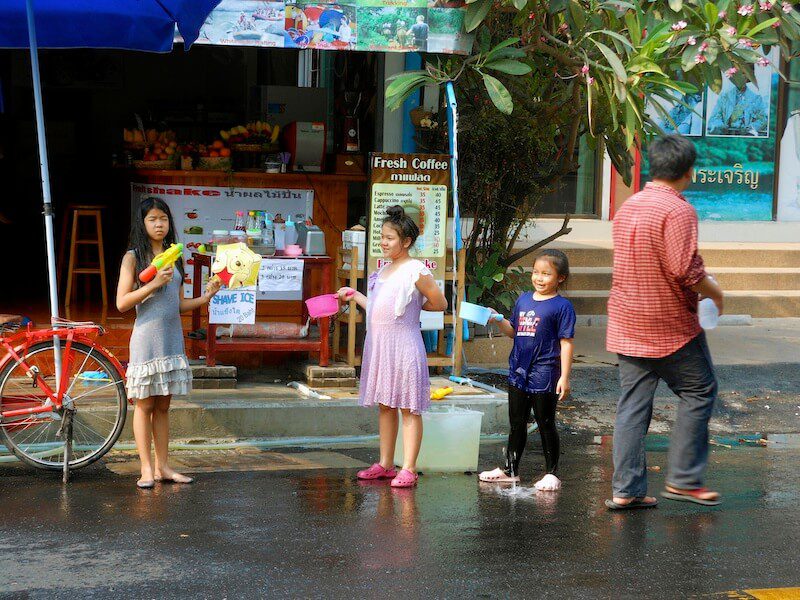 What is Songkran? What does it mean and why should you go?

Songkran is a fun and exciting festival held each year in Thailand. But what is it all about and why should you go? Read on to find out…

What are the origins of Songkran?

The story of the origin of Songkran comes from the Buddhist scripture of Wat Pho. This says that Songkran comes from the death of Kapila Brahma. As the story goes, there was once a very wealthy man who lived next door to a drunkard. The rich man had no children and the drunkard had two – he often mocked the wealthy man for being childless. This left the wealthy man humiliated and embarrassed; he begged the Sun and Moon gods to give him a son, to no avail. Until one day he offered some cooked rice to the tree god – then, the wealthy man was granted a son. His name was Thammabal, which means one who protects righteousness.

The child was very clever. He learned three vedas (ancient religious texts) as well as bird language; he also taught people how to avoid sin. When Kapila Brahma learned of Thammabal, he was eager to test his intelligence. So the god asked, “Where is the glory of men (sri) located in the morning, during the day, and in the evening?” The loser would have be decapitated. Thammabal racked his brains for six days, but could not find the answer to this riddle. Then, while lying beneath a sugar palm tree, he overheard a conversation between a pair of eagles. Allegedly they planned to eat his corpse when he lost the bet.

The female eagle asked her mate if he knew the answer to the question. He said, “In the morning, the sri appears on the face, so people wash their faces every morning. At noon, the sri is at the chest where people spray perfume every noon. In the evening, the sri goes to the feet, so people wash their feet every evening.” Thammabal memorised tis answer and told Kapila Brahma the next day. Having lost this curious connundrum, Kapila Brahma summoned his daughters and informed them that his head must be cut off.

How did this turn into Songkran?

However, it didn’t stop there. If his head was to fall to earth, it would create a constant fire that would engulf the world. If his head was thrown into the air, all of the rain would stop. And if his head was dropped into the ocean, all of the sea water would dry up. To prevent any of this from happening, Kapila Brahma told his daughters that they needed to place his severed head on an elevated phan.

His eldest, Thungsa, went on to store her father’s head in a cave inside Mount Kailash. As the sun entered Aries the following year, one of the daughter formed a procession with the angels to take the phan with the severed head out of the cave. This became tradition, and formed what we now know as Songkran.

Where does the name come from?

The sun entering Aries, which is when this celebration takes place, is known as Maha Songkran. Each time the sun moves into a different zodiac, a ‘songkran’ occurs – it has a different name each time. The word Songkran means to move or change place, as well as passing or entering. To avoid confusion, the celebration and holiday was shortened to simply Songkran; now, this is synonymous with the new year celebration.

How is Songkran celebrated?

The national holiday is a very special one in Thailand. There are many cultural traditions upheld on this day, which represent merit-making and purification or cleanliness. In the morning of Songkran, Thai people will visit local temples and offer food to the Buddhist monks. They will also pour water on the Buddha statues as well as on the young people and the elderly within their community. This is to wash away any sins and bad luck. As well as this, the festival represents unity – people will return to their family home if they have been studying away, for example, or have just moved to another area.

One of the biggest parts of Songkran is the water festival. Again, this is linked to the purification aspect of the holiday. Main roads are closed to traffic, and used as spaces for huge water fights. Everybody takes part, throwing water on or at each other. It started off with simply sprinkling water on each other as a sign of respect, but due to the hot weather around Songkran it quickly turned into something much more fun and boisterous.

DID YOU KNOW: the water festival is a common factor in many Asian new year celebrations! It takes place in China, Cambodia, India, Laos, Myanmar, Sri Lanka, Singapore, Malaysia, Mauritius as well as, of course, Thailand.

Different parts of Thailand actually celebrate Songkran in different ways. Various areas have their own traditions which they incorporate into the national celebrations. It is always a beautiful holiday, and one which sees Thai people across the country come together with love, happiness and respect.

In the central region of Thailand – which includes areas like Bangkok, Ang Thong, Sukhothai and Ayutthaya – people will clean their houses at Songkran. This is because the holiday is traditionally about celebrating the new year: fresh new beginnings, ready for a happy and healthy year ahead. Throughout the central region, they will wear traditional Thai dress or very colourful clothing for the celebrations. Food is offered to the monks, and requiems are offered to ancestors too. Further merit offerings are made: sand is given to the local temple, to aid with any upcoming construction or repairs. Animals are released at Songkran in the central region – birds, fish, buffalo, cows… Of course, there are parades and parties too! This is true of all four regions.

Although part of the central region, Bangkok has its own celebrations too. Being the capital, its festival is the biggest and brightest – attracting tourists as well as locals. Bangkok Songkran Splendours Festival takes place from April 13th to 15th. The official opening ceremony is held at Wat Pho. This is one of the most important Buddhist temples in Thailand, and it is from the scripture of Wat Pho that the origin of Songkran comes from! The temple is home to the spectacular gold-plated reclining Buddha, so it is already a much-visited space.

Many other celebrations are held on and around Khao San Road. This is one of the most popular streets in the world for gap-year backpackers, digital nomads and long-term travellers. Events during the festival include water throwing (of course) as well as ritual bathing of Buddha images. There are some beautiful processions and performances, which will be sure to take your breath away the first time you see them. You’ll also get the chance to enjoy some traditional Thai food during the festival. If you do find yourself travelling around Asia during April, head to Bangkok and take part in an amazing Songkran festival. It will be a memory that lasts forever!

Home to Phuket, Yala, Songkhla and other districts, southern Thailand has three rules when it comes to celebrating Songkran. These are:

They also partake in merit-making such as offered food to the monks, as well as the water festival. Everything is done in relaxation and kindness.

From Lampang to Chiang Mai, the northern part of Thailand is beautiful. They technically start their Songkran celebrations a week earlier – at least, the Si Satchanalai district does! On April 7th, they host what is known as the Elephant Procession Ordination. This is an event with an incredibly colourful parade, a real feast for the senses. Men dressed in traditional Thai dress are taken to temples on the backs of elephants. It is a sight to behold, and kicks off the annual celebrations across northern Thailand.

Songkran itself (on the 13th) is celebrated in northern Thailand with firecrackers or another form of gunfire. This is said to repel bad luck. The next morning, people will visit their local temples to gift food to the monks, and bathe the Buddha’s statue. They also pour water on the hands of their elders, asking for their blessings for the year ahead.

There are no major traditions that are specific to eastern Thailand. In places like Rayong, Trat and Chonburi, they celebrate in much the same way as the rest of the country. This includes making merit, and preparing food for their elders. They do continue to make merit throughout the whole festival, rather than just on the 13th – this separates eastern Thailand from other places. They also build beautiful sand pagodas, something which is common in places like Koh Samui and Myanmar too. This is a Theravada Buddhist practice, used to cultivate merit.

If you enjoyed reading this article, I am sure that you will also love: