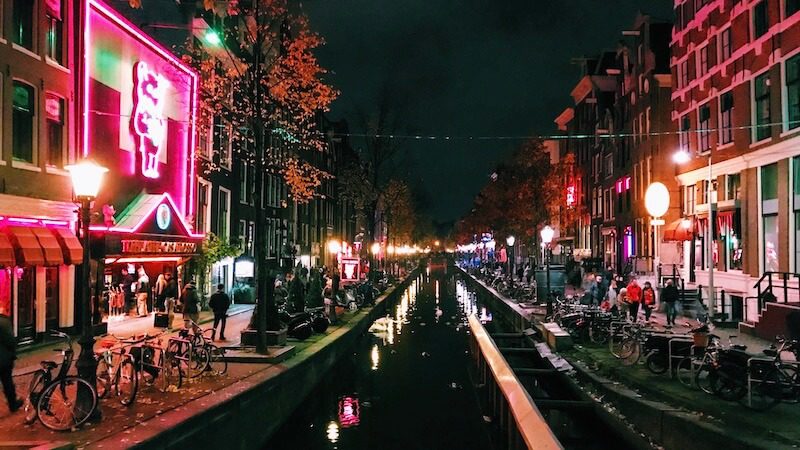 Sex tourism in Amsterdam is BIG business. Amsterdam is well known for canals, bicycles, legalised marijuana and pretty architecture. It is home to the Anne Frank Museum and the Van Gogh Museum, and attracts a wide variety of tourists year-round. From stag dos to solo travellers, couples to families, Amsterdam is a top location for city breaks and day trips. Whether you have 24 hours in Amsterdam or a week in the city, there is so much to do in the Netherlands’ capital – and plenty to see. That includes the famous Red Light District, which is the hub of female sex tourism in the ‘Dam. Lets learn a bit more about sex tourism in Amsterdam….

You can read my in-depth article about sex tourism HERE – but it is essentially the concept of travelling to a particular location for the purpose of sex or sexual activities. It may be the sole reason for a trip, or a secondary part of your holiday. Sex tourism, in Amsterdam and elsewhere across the globe, is most generally associated with prostitution although it also applies to sex shows and other similar concepts.

The scale of sex tourism in Amsterdam

When you think of sex tourism or hear the two words together, you will likely think of Amsterdam first and foremost as well as places like Thailand or the Gambia. This is because Amsterdam is very well known for its Red Light District, sex shows, and prostitution. And the reason it is so popular over there? Prostitution is both legal AND regulated in the Netherlands – and with Amsterdam being the capital as well as being the biggest tourist location in the city, it stands to reason that the scale of sex tourism in Amsterdam is massive.

Statistics show there are around 1000 prostitutes, or sex workers, working across Amsterdam on any given day. Some of these work in the windows across the Red Light District, offering sex in exchange for money, while others work in clubs or brothels, or as escorts offering private services.

With 15 million+ tourists visiting Amsterdam every year (pre-Covid), it is no surprise that the Netherlands’ capital has a very high number of sex tourists utilising the services of these sex workers. And you don’t have to pay for sex in order to be a sex tourist. Visiting the Temple of Venus, or the Sexmuseum, would also class you as a sex tourist – as would watching a peep show.

Types of sex tourism in Amsterdam

There are a few different types of sex tourism on offer in Amsterdam. The most famous is window prostitution, where prostitutes stand in the windows of the Red Light District enticing customers to come in and pay for their services. This is what springs to mind for most when you think about sex tourism in Amsterdam. The buildings which these windows are in are essentially brothels and operate as such. Those looking to engage in sex tourism in this way just simply need to walk up to the window of the sex worker they are interested in and make it know, respectfully and politely.

Another type of sex tourism in Amsterdam is sex shows – also known as peep shows. There are many different sex shows on offer in Amsterdam, from comedy-based shows to live sex performed by real couples rather than, say, porn stars. The average price of a sex show is €30, but prices do vary. Some offer a ticket-and-drinks package, for example, and the Casa Rosso is free for bachelors (or stags, as they are better known in Europe) in costume. You’ll see a huge variety of ‘activity’ during sex shows; strip teases, live sex, women using props in a sexual manner and so on.

There is also a sex museum in Amsterdam. This is the Temple of Venus, open since 1985 and attracting a huge number of tourists every single year. The entrance fee is around €9, and it isn’t a particularly large museum but it is definitely worth visiting as a less intense introduction to sex tourism in Amsterdam. You may not want to engage in sex yourself, but there is plenty to learn about the history of prostitution and sex in general here.

Money in sex tourism in Amsterdam

There is a lot of money in sex tourism in Amsterdam! Window sex workers hire their windows from landlords, paying them a fee at the beginning of their shift. They will make this fee back over the course of the day or night, earning on average 200-600 Euros during a good shift. Less than €200 is seen as a bad shift, but some prostitutes have been known to earn over €1000 in one shift! Of course, private escorts charge (and therefore earn) a lot more.

So how much does sex cost when you’re in the ‘Dam? Well, sex tourism in Amsterdam will typically cost around €50 for a 20 minute session. If you want something special or require a longer time period, you will of course be charged more. These prices are not set in stone in any way, as the sex workers of Amsterdam are free to set their own prices.

How much income does sex tourism generation for the Dutch GDP, then? This figure is difficult to find, but as of 2011 it was said to be €550million per year – although this was over a decade ago so the figure is likely to be much higher now.

Who travels to Amsterdam for sex tourism?

Prostitution and other forms of sex work is illegal in many countries across the globe. This is why, in the places where it IS legal, you tend to see a trend of foreign sex tourists engaging with the industry. Locals see it as normal and find themselves unphased by the Red Light District, for the most part, especially if they have grown up around it.

But for tourists coming from the UK or the US, where sex work is almost entirely illegal, it is often seen as something exciting and exotic. It isn’t just seedy men who engage in prostitution and sex tourism in Amsterdam, either. While this may be the stereotype it isn’t necessarily true. Stag parties made up of younger men are also highly likely to visit the Red Light District and act as a sex tourist – and a LOT of people visit the Sexmuseum. Just because you’re not physically having sex, doesn’t mean you’re not a sex tourist if you go to a live show or the museum. This actually means that the majority of tourists end up being sex tourists, simply by engaging in these less obvious forms of sex tourism.

Statistics on who exactly engages in sex tourism by paying for sex are hard to find, as many people are unwilling to admit that this is something they have done during their time in the Dutch capital.

How did the pandemic affect sex tourism in Amsterdam?

When the world shut down in 2020, Amsterdam like many other cities saw a sudden and almost-total drop in tourism figures as nobody was allowed to travel, and the majority of people were confined to their homes for weeks or months on end. Being a close-contact activity, sex tourism in Amsterdam was understandably a no-go even after tourists started to flow back into the city.

Of course, this shut down meant that many sex workers lost their income for an extended period of time – as such, they were keen to re-open their windows so to speak. When the Red Light District re-opened, sex workers were overjoyed but made sure to stick to strict hygiene rules involving no face-to-face contact, disinfecting rooms after each client and also ensuring customers had no visible symptoms before an appointment – in the same way that hairdressers in the city were operating.

Residents living in and around the Red Light District, however, really enjoyed the calmer and quieter atmosphere afforded to them during the pandemic. They were disappointed when the windows re-opened. In a 2020 article, Time said that residents groups had shared a petition aimed at limiting the number of visitors in the area. It quickly amassed the required amount of signatures for something to be done, and the mayor was keen to discuss movin sex work out of de Wallen and into a specific area outside of the main city centre. This is still ongoing and you can read more here.

Is sex trafficking an issue in Amsterdam?

Because prositution is legal here and the sex workers pay tax, are part of unions and so on – it is easy to say there is no sex trafficking issue in Amsterdam. But is that necessarily the case? A 2017 report suggested that there were around 6000 victims of human trafficking annually, with around 4000 of these bring victims of ‘sexual slavery and abuse’. These women (and, unfortunately, girls) are very unlikely to be the ones you see in the windows of the Red Light District. They’ll be hidden away in darker and dingier parts of town, unable to have any authority over their own bodies like the regulated sex workers at de Wallen do.

If you found this article on sex tourism in Amsterdam interesting, I am sure that you would like these too-