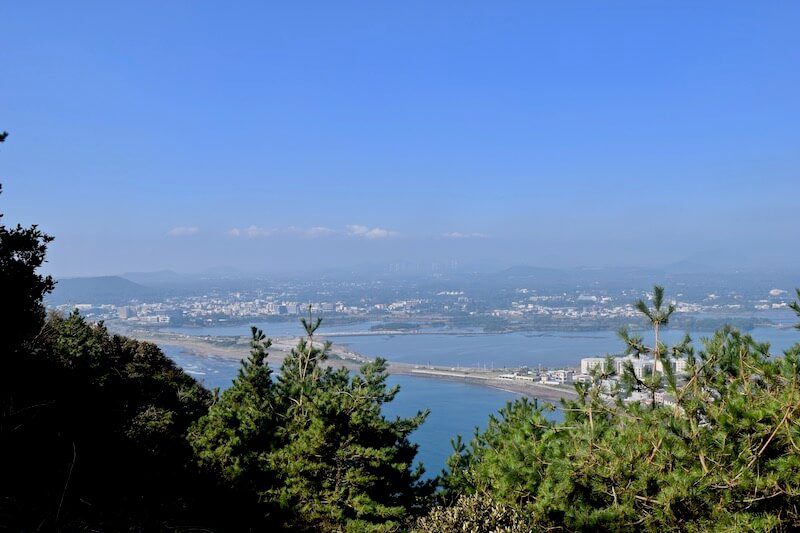 Everything you need to know when visiting Seongsan Ilchulbong

Seongsan Ilchulbong is a place that you should be on everyone’s Jeju travel itinerary! With its jaw-dropping views and Instagram-worthy shots, this volcanic crater is a great place to visit. Here’s everything you could possibly need to know if you’re planning a visit to see the peak…

What is Seongsan Ilchulbong Peak?

Also known as Sunrise Peak, it is an archetypal tuff cone – a type of vent landform caused by a volcanic eruption. Tuff cones are, as the name suggests, cone shaped as well as being steeply sloped. They are typically formed of highly altered and thickly bedded tephra, with wide craters.

Seongsan Ilchulbong was formed around 5,000 years ago. It is the result of hydrovolcanic eruptions on the shallow seabed in the area.

It is located on the eastern side Jeju Island, and visitors say it resembles a giant castle. The cone is 182 metres high, and the inner structures are diverse making them a big interest to geologists and scientists alike. The materials here provide an insight into the eruptive and depositional processes of hydromagmatic volcanoes around the globe!

Now the science is out of the way, here are some more things you might want to know about visiting Seongsan Ilchulbong…

Why you should visit the peak

One of the main reasons to visit Seongsan Ilchulbong is to hike up the peak. This takes around 45 minutes. There are frequent rest stops overlooking the sea, and steps have been built to ensure the climb is easier. The views as you ascend, and from the top, are absolutely spectacular.

You will also be able to see the Haenyeo to the left of the peak. These are the famed Jeju Island Divers, who catch sea food and have done since around 1629. Of course, in the 17th century there was no diving equipment – and the Haenyeo still choose not to use it. It is an hour to see them diving, and you can even buy fresh sea food from them at Seongsan Ilchulbong.

Read also: The best beaches in Jeju: A guide for travellers

You can also see the sunrise here which, as the peak’s nickname suggests, is pretty fantastic. Even though the peak itself doesn’t open until after sunrise, you can take the left hand trail (which is free entry) and climb the gentle slops to see the sun rising over the water. If you climb just before closing time during the right season, you can catch the sunset too!

Many people are reluctant to visit Seongsan Ilchulbong because they think that the climb to the peak may be too challenging. Well, if I can do it with a baby on my front and a toddler on my back, anyone can! They climb is actually not as difficult as it looks and is well worth it for the views that you get from the top…

Getting to Seongsan Ilchulbong

Seongsan Ilchulbong Peak is located on the island of Jeju-do, commonly known as Jeju. To get to the island from South Korea, you can fly from either Seoul (just over an hour) or Busan, which takes just under an hour.

If you’re travelling on a budget or just fancy a trip across the water, considering taking the ferry from South Korea to Jeju Island. There are five ports that currently run very services to Jeju:

Ferry journeys take between two and four hours, depending on which port you leave from. There is also an overnight ferry from Busan, which takes around 12 hours – however it is the most affordable option, and is more comfortable than it sounds!

Once you’re on the island, getting to Seongsan Ilchulbong Peak is simple. You can hire a car from the airport, though remember you will need a valid International Driving Permit as well as your own driving licence.

TIP: parking is free and readily available at the peak.

If you’re travelling on a budget or don’t feel comfortable driving in a different country, you can get a bus to Seongsan Ilchulbong. Take the 701 bus from Jeju City Old Bus Terminal, which takes just over an hour, or the 111/112 directly from Jeju Airport. This takes between 1.5 and two hours.

During the summer, Seongsan Ilchulbong is open from ten past seven in the morning until seven o’clock at night. In the winter months, it opens at 7.30am and closes at six in the evening.

Seongsan Ilchulbong is a UNESCO World Heritage Site, making it popular with tourists and travellers from around the world. There are a few other World Heritage Sites on the island, and you can book some brilliant tours to take you to the peak and the nearby Manjanggul Cave as well as longer tours that will take you to every point of interest on Jeju Island.

How much does it cost to visit the Peak?

If you are visiting as part of an organised tour, your admission fees will likely be included. However, if you’re more of a DIY traveller, here are the admission fees…

Reduced prices are available to those in groups of 10 or more. Child tickets are for ages 7-12, youth tickets for ages 13-24 and adult tickets for those aged 25-64. Children aged 6 and under, and the elderly (65+) are entitled to free entry, although proof of age is required.

Read also: The best Jeju Waterfalls: A guide for travellers

Other things to know about Seongsan Ilchulbong

Peak season on the island is late March to early April, so this tends to be when Seongsan Ilchulbong is busiest in terms of tourists. However, Jeju Island is at its most beautiful this time of year – so it’s no wonder everyone visits then!

There is a luggage storage room at entrance of the peak, should you be visiting on your way to or from the airport/ferry terminal.

And there you have it – everything you need to know about visiting Seongsan Ilchulbong on a trip to Jeju Island or South Korea in general. It is a fascinating natural beauty, and well worth seeing.