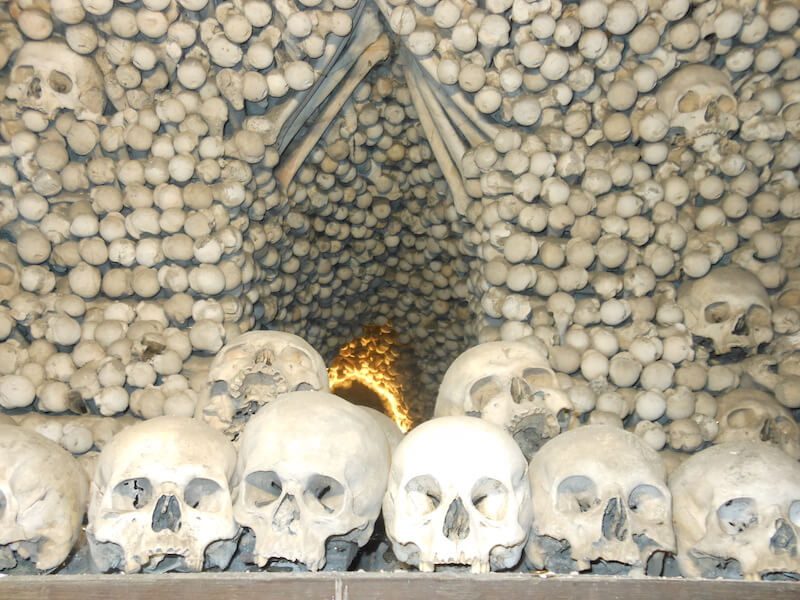 Sedlec Ossuary is one of the most incredible places that I have ever visited. Eery, fascinating and unique, a trip to the church of bones is most certainly a memorable experience. But what exactly is Sedlec Ossuary and why you should visit? Read on to find out…

What is Sedlec Ossuary?

Located in a beautiful town called Kutna Hora in the Czech Republic, the Sedlec Ossuary is a tiny Roman Catholic chapel. It is beneath the Cemetery Church of All Saints in the suburb of Sedlec. It is famous because it contains the skeletons of 40,000-70,000 people – the chapel is entirely decorated with human bones. These have been arranged in various macabre ways.

Around 200,000 people visit Sedlec Ossuary every year, which is a surpringly small number given how amazing this tourist attraction is! It’s pretty easy to reach too as Kutna Hora isn’t far from the capital city of Prague, which is popular with stag parties and those looking for an affordable cultural city break.

For those looking for a glimpse at death, the ossuary is a must-see. It is an example of dark tourism; somewhere people flock to for a dance with the more macabre side of sightseeing, and while it isn’t the result of human evil like Auschwitz, or a heartbreaking accident like the Chernobyl site, it is still somewhere that those with an interest in dark tourism have on their list of places to visit.

There is simply something so fascinating about death. It is the one certainty in life, but a concept that none of us can ever really know everything about. This is why Sedlec Ossuary, and similar places like the Catacombs in Paris and Rome, are so enticing.

How to get to Sedlec Ossuary from Prague

Prague is a popular city break destination in Europe. It is considered to be one of the most beautiful cities in the world, full of gothic architecture and a wealth of culture spread across museums throughout the city. On top of this, Prague is home to hundreds of bars, restaurants, hotels, coffee shops and tourist sites such as the Charles River and the stunning castle complex. Around 7 million foreign tourists visit Prague each year, strolling around the cobbled streets and visiting all of the famous locations throughout the city. Prague is also the perfect base location if you are considering visiting the Sedlec Ossuary. Whether you are in Prague for three days, a week or longer, I highly recommend you spare the time for a trip to Kutna Hora.

You can get the train from Prague Central Station to Kutna Hora. It takes roughly 50 minutes, and there are regular trains throughout the day. Book your ticket through czech-transport.com and make sure you get there in time to find your platform – the station is huge. Kutna Hora station, on the other hand, is tiny. It is also just a ten minute walk from here to the suburb of Sedlec, where you can visit the ossuary as well as Saint Barbara’s Church. Google Maps will show you how to get from the train station to the church area. This DIY way of visiting Kutna Hora and Sedlec Ossuary is ideal; if you just want to see the chapel, you’ll only need an hour or so. This means you can fit it all into one morning and head back to Prague for more sightseeing, eating or drinking in the afternoon.

If you are looking for an organised trip, there are also guided tours from Prague to Sedlec. You can book a full day trip to Kutna Hora from the capital, combine it with a visit to a brewery or even include a three-course lunch during your tour. However you decide to visit Sedlec Ossuary, it should definitely be on your list when planning your Prague itinerary.

Sedlec Ossuary history- When and why was this church of bones built?

Early history of the chapel

The church itself was built around 1400. However, the history of the Sedlec Ossuary stretches even further into the past – back to 1278, to be precise.

The suburb is also home to the Sedlec Abbey, a UNESCO World Heritage Site that was the first Cistercian monastery in then-Bohemia. It was founded in 1142. Almost 150 years later, the abbott (named Henry) was sent to the Holy Land by King Otakar II. He obliged, of course, and returned with a little bit of earth that he had take from Golgotha. Henry sprinkled this over the cemetery at the abbey. This location then became a desirable place to be buried given its pious connections.

The 14th and 15th centuries

At the turn of the 15th century, around the year 1400, a Gothic church was built in the very middle of the cemetery – the one you can see and visit today. It has a vaulted upper level, as well as the lower chapel which was intended to be used as an ossuary. With everybody wanting to be buried here, the cemetery had to be extended over the years especially during/after the Black Death ad various epidemics at this time.

Thousands upon thousands were buried at the Sedlec Abbey cemetery. However, during the Hussite Wars the cathedral and the cemetery were plundered and burned. Bones from abolished graves were moved into the ossuary, and legend says that a half-blind monk arranged the skulls and bones into pyramids. It is said that this work gave him his eyesight back.

Chronicler Š E Kapihorsky wrote in the 1600s that the bones were arranged decoratively. Whether this is the work of the aforementioned half-blind monk, historians are unsure. Restorative work took place in the 1660s, when bones were rearranged.

Between 1703 and 1710, a new entrance was built in order to support the leaning front wall. The upper chapel was also rebuilt. These were designed by Jan Santini Aichel, in typical Czech baroque style.

Then, in 1870, the Schwarzenberg aristocratic family hired a woodcarver named František Rint. The family had purchased the abbey property in the late 1700s, when the monastery itself was abolished by Joseph II. Their funding allowed the Sedlec Ossuary to be maintained. Ring was asked by the Schwarzenbergs to put the bones in order – which is what you can see today. He bleached and disinfected the bones before arranging them in various patterns.

What is there to see at Sedlec Ossuary?

So, what can you actually see at Sedlec Ossuary? Bones, of course – plenty of bones! Head down into the chapel and you’ll be blown away by the sheer amount of human bones on display – they are all over the place. From Rint’s signature at the bottom of the staircase to the Schwarzenberg coat of arms, the bones are artistically arranged throughout the ossuary.

A bone chandelier containing at least one of every bone in the body hangs from the ceiling, and an arch of “skull and cross bones” curves its way around the entrance. Skulls are stacked in pyramid shapes, on shelves and behind fencing. It is a wonderful glimpse into life after death – a macabre way to spend an afternoon in the Czech Republic, and come face to face with mortality.

The phrase memento mori adorns the wall, which translates as “remember the death”. As the Sedlec website says, this ‘remains a valid message for each visitor of this unique place and helps us to understand the symbolism of the place and its decoration. It is not a celebration of death, but it symbolizes the equality of people in front of the throne of God.’

You can visit the ossuary, and it is a highly recommended visitor attraction in the Czech Republic. There are some guidelines for visitors, which you can see below:

If you enjoyed this article you may also be interested in-