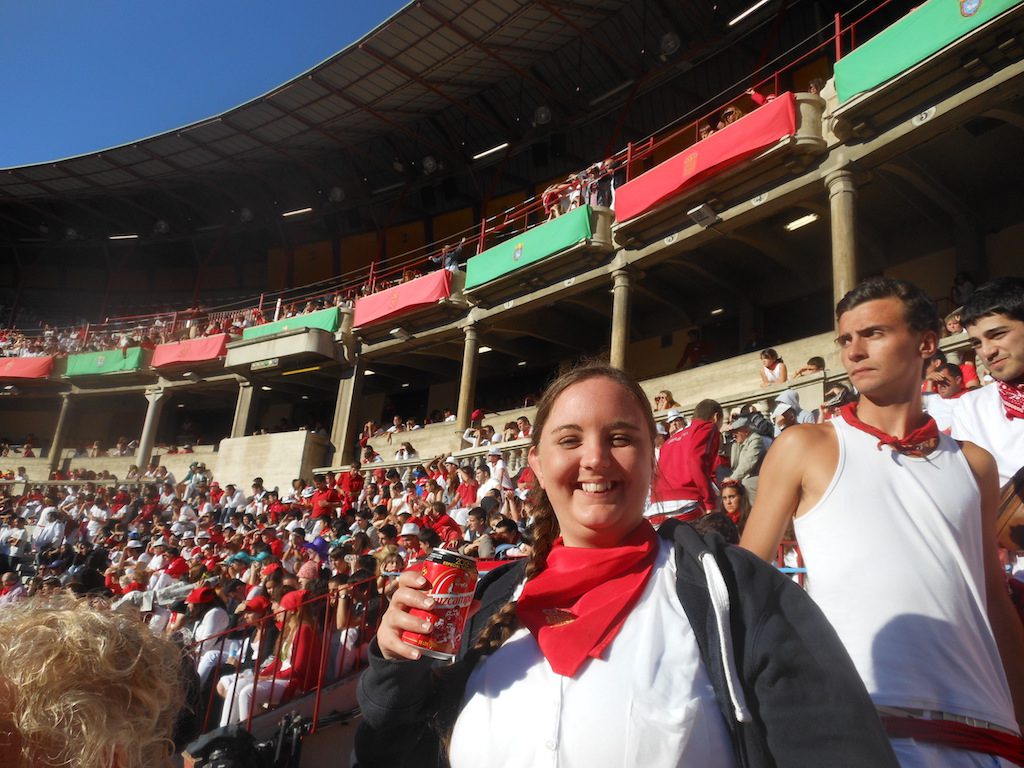 9 fascinating Running of the Bulls facts

While there are many bull-runs across Spain, the most famous occurs in Pamplona – the capital of Navarre, a Spanish chartered community.

It takes place during the 9-day festival of Sanfermines. This festival honours St Fermin – the patron saint of Pamplona.

He is said to have been baptised at a spot known as the Pocico de San Cernin. This translates to ‘the Small Well of San Cernin’. This is located across from the facade of a church built on the foundations of a pagan temple and dedicated to St Cernin.

He was the first bishop of Toulouse and the one to baptise St Fermin. It is St Cernin who was martyred in 257 AD by being tied to a bull by his feet and dragged to his death. However this martyrdom has been transferred St Fermin, too.

St Fermin was Pamplona’s first bishop. He is very important to the city and people of Pamplona.

The Sanfermines festival is the highlight of the year for many locals. Celebrations start at noon on July 6th with a firework being set off, and last until midnight on July 14th when the popular song Pobre de mí is sung. From parades to stone lifting, bullfighting to the Jai alai tournament, there are many traditions during the festival. None are as popular, though, as the running of the bulls.

#2 The festival isn’t all about the bulls

When it comes to the famous Running of the Bulls in Pamplona, there is actually much more to it than just the bull-running event. While this takes place daily throughout the festival at 8am each morning, it is just one part of the big event.

A whole week of celebrations sees a variety of events and sports taking place. There are also various foods and drink on offer throughout the city.

From the moment the firework (chupinazo) is set off from the balcony of he city hall, thousands of people dance in the streets and squares of Pamplona. On July 7th each year a procession carries the 15th-century statue of St. Fermin himself through the old town, and people wear giant papier-mâché heads for the occasion.

One popular part of the festival is the El Struendo, otherwise known as The Roar. It takes place just before midnight on a different day each year, and basically just involves a crowd gathering at the Town Hall to make as much noise as possible. They use drums, cymbals, pans, their voices and more. It lasts for hours!

Music is another huge part of the festival. The whole thing ends with a song at the closing ceremony: the aforementioned Pobre de Mí or ‘Poor Me’. Everyone sings it together with the mayor by candlelight.

Another important song at the Sanfermines festival is La canciòn del Encerrio. This is sung three times before each bull run, in Spanish and also in Basque.

Those taking part in the run gather in front of a statue of St. Fermin, singing to hi and asking for blessings and protection ahead of the main event.

#3 Bull-running once took place in England

While Pamplona might be the real home of the running of the bulls, it does happen elsewhere.

There are other places in Spain where you can attend bull-runs, as well as in Portugal, Mexico and the Occitan region of the south of France.

But it may surprise you to learn that bull-running used to be practiced in England! The Stamford Bull Run, in the rural English town of Stamford (located in Lincolnshire) was once a popular tradition. It was held annually on the 13th November, which is St Brice’s Day. It ceased in 1839, but is said to have taken place for up to 600 years previously.

Other bull-running events in England took places in the following places:

It was very different to the Spanish running of the bulls that we see today, where strict rules and regulations in place. This was more of a drunk and disorderly event!

There is a ‘uniform’ to be worn when taking part in the running of the bulls, especially the official Pamplona bull-running event.

Runners wear red and white. Usually white clothes with a red scarf or handkerchief tied around their neck – white to represent San Fermin himself, and the red to represent the blood from his death.

Some people do relate the red and white costumes to butchers, who are said to have started the tradition of bull-running. You can’t wear just anything, as it is seen as disrespectful to not wear the red and white outfit.

#5 The tradition was started by butchers

Although the running of the bulls can be linked to St Fermin and St Cernin’s stories, the tradition is actually said to have been started by butchers.

In northeastern Spain in the early 14th century, §men would try to hurry and rush their cattle by using scare tactics or exciting them. This was to try and get them to the market quicker. As time went by, as with many things, this turned into a bit of a competition.

This was especially true of young men, who would attempt to race the bulls to the pens without being overtaken. It became more and more popular to do so until it turned into the recognised event that it is today!

#6 The running of the bulls is featured in popular culture

Ernest Hemingway described the Pamplona Running of the Bulls event in two of his novels: The Sun Also Rises and Death in the Afternoon. This is partly why the tradition is so famous around the world now.

But he isn’t the only one to have featured bull-running in fiction; James Michener did it in his 1971 novel The Drifters, and it has been on seen on-screen too.

You see the running of the bulls in a Bollywood movie: Zindagi Na Milegi Dobara (2011) where it is shown as a scary bucket list event. It is used to portray the feeling of freedom that comes with surviving something dangerous. And in Billy Crystal’s 1991 film City Slickers, one of the characters (Mitch, played by Crystal) is gored from behind by a bull whilst on holiday.

#7 There is another version of bull-running

While the typical running of the bulls involves racing the bulls to a bullring, there is another type of bull-run. This is known as Bous al carrer, which is Catalan for ‘bulls in the street’.

It is common in villages across the Valencia region as well as Terres de l’Ebre in Catalonia and Fornalutx in Mallorca.

They also tend to coincide with local festivals and celebrations; the difference is that animals are not directed to a bullring. They are considered an initiation rite for many young men transitioning to adulthood.

#8 There are strict rules at the Running of the Bulls

When it comes to the official Running of the Bulls in Pamplona, there are lots of rules that must be adhered to. This is out of respect but also for public safety reasons.

One of the rules is that selfies are prohibited while running. This makes perfect sense as it is a sure fire way to distract yourself while taking part in this fairly dangerous activity. This could lead to injury or even death. So, save the selfies for after the event!

Other rules include no drinking before taking part; again, this is another rule that common sense would agree with. As alcohol is known to impair both judgement and vision, being sober before running with the bulls is definitely a good idea.

There is an age limit for bull-running too: no under 18s allowed.

As with many, many, many things, the running of the bulls has a history of gender inequality.

For a long time it was a man’s event. Women were originally prohibited from taking part in the event, and you still don’t see it much at the smaller, more traditional bull-running events that are away from the public eye.

But at the Pamplona Running of the Bulls, where people flock from around the world to take part, women are allowed to run.

Most local women choose not to as they prefer to adhere to the traditional ways of the event. However, foreigners come to Pamplona in their hundreds to tick it off their bucket list: ladies included!

Running of the Bulls: Further reading

If you’ve made it to the end of this article then I’m guessing you are interested in learning about the running of the bulls! Good on you- it is absolutely fascinating!

Here is some further reading that you may be interested in: