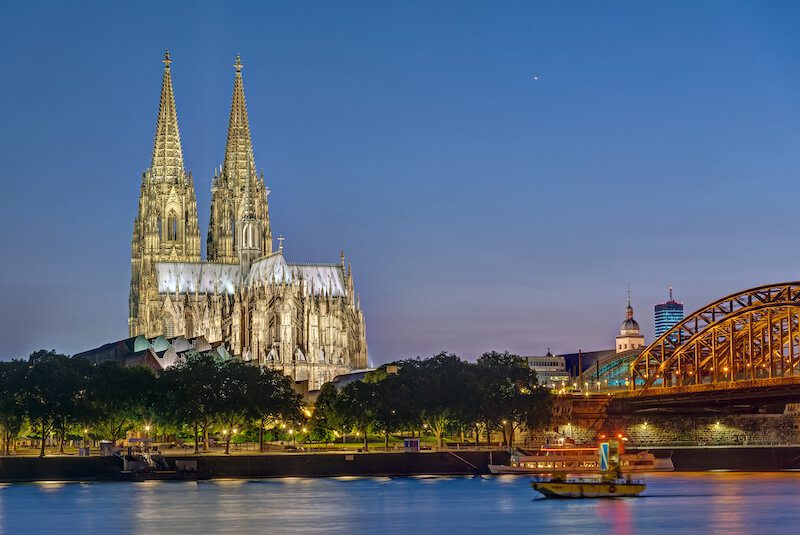 The 10 Most Impressive Rivers in Germany

10 Most Impressive Rivers in Germany

In Germany, you’ll find rivers, canals, and lakes all over the place. The Rhine and Elbe rivers are still active transportation canals and are important to German agriculture and industry. Boats, sailboats, cruise ships, and kayaks navigate these channels. A century ago, these paths led to the picturesque tourist destinations we see today. So, lets take a deeper look at the most impressive rivers in Germany…

A 250-mile-long river starts its course in the Lusatian Mountains in northern Bohemia, Czech Republic, right above the German town of Neugersdorf. The Spree drains into the North Sea and joins the Elbe in Germany.

As the Spree River flows through Germany, it creates the Spree Forest, a marshland forested biosphere reserve. It contains farmland, ponds with alder trees, sandy dry areas with pine forests, and meadows, as well as 18,000 species of plants and animals.

One of the many attractions in Berlin is the Badeschiff, a public swimming pool that floats in the Spree River. The Badeschiff opened in 2004, offering swimmers a clean environment close to the river. Spreeinsel, commonly known as Spree Island, is a riverbank of the Spree.

The Saale River gets its name from the Proto-Indo-European words séles, which means marsh, and sal, meaning salt.

Bavaria’s Saale River starts at Grosser Waldstein Mountain in the Fichtelgebirge Mountain Range, where it flows for 265 miles. Just above Barby, the Saale merges with the Elbe. It flows through the Thuringian Forest mountains as it moves north.

It’s been connecting three federal states for over 25 years – Bavaria, Thuringia, Saxony-Anhalt – making it an impressive symbol of German reunification.

A number of mountains can be seen, which are lined with castles and palaces as the river flows through forests, gorges, reservoirs, and steep climbs.

The Weser cuts the city in half from Obervieland in the southeast to Vegesack in the northwest. In a way, the city area is divided into “right of the Weser” and “left of the Weser.” The Weser played a major part in the growth of the city when it was first founded.

Bremen residents enjoy a variety of leisure activities along the Weser. It is a place where people gather to relax, whether it is walking along the dyke or taking a stroll along the promenades, stopping at a bar or restaurant in Schlachte or Überseestadt, or relaxing and sunbathing in large green spaces like Osterdeich.

Whether it’s Café Sand or Waller Sand, you can unwind from daily life in true vacation style along this one of the most famous rivers in Germany.

Upon entering Bavaria, you’ll find another from the list of rivers in Germany, the Inn River, flowing into the country. River Inn originates in the Swiss Alps. German and Austria share the Inn River’s border at Bavaria’s border with the Danube.

Inn has been the training ground for many pioneers of Himalayan kayaking in the past and present. With so many segments at the Inn, you can get the job done regardless of your skill level, whether you’re a beginner kayaker or a regular runner looking for something to do.

The Lower Inntal River is wide except in Kufstein, where it passes between the Kaisergebirge and the Bavarian Alps. It is north and then east as the Inn enters Bavaria in Germany before it obtains its principal tributary, the Salzach River.

There is a lot of farmland along its lower and middle stretches, which are sometimes used for hydroelectric power. It meets the Danube at Passau, Germany.

Time to explore one of the longest rivers in Germany, the Main River, measuring 327 miles. The Main River joins the Rhine in Mainz, running east to west. The Main River rises in Upper Franconia, but it can only be navigated between Bamberg and Mainz.

It starts in Bamberg and ends in Kelheim, Germany, where it joins the Danube River. It was inaugurated in 1992. It’s a major waterway connecting the Black Sea to the North Sea to the east. Today, both passenger ships and smaller commercial boats can go through it.

You can experience authentic mediaeval Germany on the Main river cruise, one of the best ways to see it. It is a paradise filled with charming timber-framed houses located in the villages and cities along the river, surrounded with lush green forests and captivating landscapes.

With a length of 339 miles, the Moselle is well known for its beautiful valley and impressive surroundings. It starts in the eastern French Vosges mountains and goes through Luxembourg, northeastern France, and western Germany. Ausonius, an ancient Roman poet, wrote a poem about the Moselle River in 371.

A section of the Moselle River passes by vineyards, abandoned castles, and ruins. Water sports can be enjoyed along the stream in this well-liked location, like canoeing, cycling, and running. German’s Moselle River Valley is regarded as one of its most beautiful regions. There are many cruises that travel along this river too.

Find another from the list of rivers in Germany that is 531 kilometres long, the Oder passes through the Czech Republic in Western Poland, where it forms the Oder-Neisse line dividing Poland from Germany. In the end, it empties into the Polish-German-owned Szczecin Lagoon. After World War II, the Oder became the eastern frontier of Germany.

The Oder splits into three branches that empty into the Bay of Pomerania of the Baltic Sea.

In Poland, the Oder River plays a big role, backing up the country’s overburdened railways and roads that connect the heavily industrialised south with Szczecin, located at the Oder’s Baltic mouth. About 10% of the port’s gross tonnage is transported by the river, and eastern German barges use it too, which is connected to the central European waterway system by navigable canals.

There is a network of navigable canals connecting the Oder to the Vistula, the country’s largest river, the rivers in its east and the waterways of Belarus, Ukraine, and Russia. Consequently, the system could become an all-water commercial route for moving goods from west to east and east to west.

Among the most important rivers in Germany, the Elbe also has a part in South Europe that is a picture-perfect natural paradise. In addition to flowing along lush green meadows, beneath bridges, and past serene white castles, River Elbe is flatter than any of the other German rivers on this list.

Because this river was part of the Iron Curtain that was removed from Germany after World War II, it was mostly unaffected by human intervention, which allowed natural forces to do their thing.

From Magdeburg to Prague, the Czech capital, you can take an Elbe cruise if you have time and want to be adventurous. The Elbe connects northeastern and southern Europe. It’s more than 1,000 km from the Czech Republic to Hamburg, where it empties into the North Sea.

Starting with a sandstone massif, the Elbe passes through vineyards before ending up in a low-lying meadow. On the banks of the Elbe are places like Dessau, the birthplace of the famous Bauhaus style of architecture, Wittenberg, Luther’s former residence, and the porcelain-making town of Meissen.

As one of the longest and most impressive rivers in Germany, the Rhine is deeply connected to the history and culture of the six nations it passes through. Throughout history, this river has captivated composers, artists, and poets with its romance.

Many great works of art have been inspired by the magnificent scenery and numerous hilltop castles that make up a 764 miles stretch alone.

A long time ago, the Rhine was a source of inspiration for poets and painters, but in the 19th century, the Romantics were particularly moved by its dramatic beauty. One of their main symbols was the Legend of the Lorelei, which was based on a formidable cliff along the Rhine. Lorelei sat on a cliff at the narrowest, deepest, and fastest part of the river. Seafarers would capsize as soon as they faced her sensual song and her beautiful hair.

No matter what time of year you take a trip down the Rhine, you’ll enjoy it. Winter cruises take passengers to Christmas markets, while spring cruises give passengers the chance to see tulips covering riverbanks and Easter egg-painted towns and villages.

Boppard hosts one of the biggest wine festivals at the end of September, so that’s another option. In the fall, you can see the leaves turning golden and the regional wine festivities are in full swing.

The Danube, the second-longest and one of the most captivating rivers in Germany, passes through an amazing ten nations as well as four capital cities: Belgrade, Bratislava, Budapest, and Vienna.

When you take a cruise along the Danube’s meandering course, you’ll be travelling in the footsteps of monarchs and emperors, stopping at locations that served as the inspiration for famous composers, and touring wine-producing regions all over the world.

A visit to the magnificent Melk Abbey, a guided tour of imperial Vienna, and a stop at the Iron Gates Gorge, known for its stunning natural beauty and imposing rock carving of the last king of Dacia, are just a few of the highlights of a Danube river cruise. Consider a cruise in May or June to avoid the summer rush and sweltering city temperatures.

Rivers of Germany and Their Importance – Parting Thoughts

Historically, German rivers have played a significant role in its development. German has one of the most advanced inland navigation networks in the world because of all the rivers flowing through it, either to or from other European countries.

Moreover, the rivers have contributed to the generation of hydroelectric power, recreation areas, international boundary delineation, and, most importantly, the development of a healthy environment.

In case you don’t have several days to see the country, you might prefer a short day cruise. You can find a lot of large cities in Germany that are situated along a river’s edge, like Hamburg on the Elbe, Cologne on the Rhine, Munich on the Isar, and Berlin on the Spree.

You can take short trips up and down canals, pass important landmarks, and see breathtaking views of all of them. Tours usually last an hour or two, so you can relax, enjoy the summer breeze, and get a fresh take on Germany.

If you have enjoyed this article on the most impressive rivers in Germany, I am sure that you will enjoy these too-