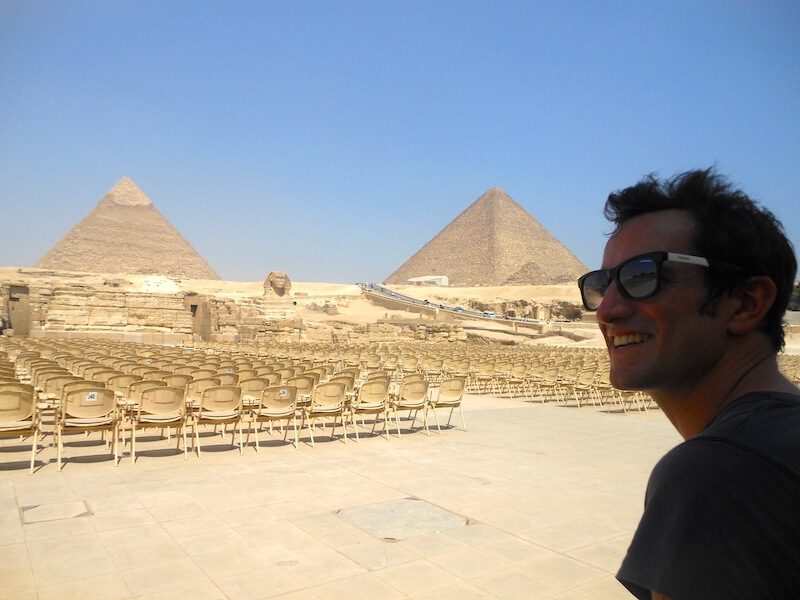 Visiting the Pyramids of Giza: A complete guide

When you think of Egypt, you very likely think of the Pyramids of Giza. They are almost synonymous with the country, and they are absolutely breathtaking. If you’re considering a trip to Egypt, here’s a complete guide to help you tick the pyramids off your list!

Where are the Pyramids of Giza?

The pyramids of Giza are located in Egypt, on the outskirts of Cairo. Visiting the pyramids can easily be organised via a tour, with a private guide or independently upon arrival in Egypt. I recommend securing your visa for Egypt in advance of your trip. Prior to our trip, we decided to get our Egypt visa online. Getting the visa was super easy and convenient and helped to make fo a simple entry to Egypt when we arrived.

When you arrive in Cairo you will need to book a tour or a private car to take you to the pyramids. The pyramids are in the Al Giza Desert, and the complex is called the Giza Necropolis. There are three pyramids here: the Great Pyramid of Giza, the Pyramid of Menkaure, and the Pyramid of Khafre.

Giza is a city on the west bank of the Nile, near to Cairo. Alongside the Pyramids of Giza, there are other ancient monuments to behold. Giza has always been an important part of Egypt’s history, due to its close proximity to Memphis – the capital city of the first unified Egyptian state under Narmer, the first pharaoh.

Why were the pyramids built?

The Pyramids of Giza were built as tombs for ancient Egyptian pharaohs and their queens. They contain chambers inside, and are surrounded by smaller pyramid structures, mastaba tombs and mortuary temples. While there are over 80 pyramids across Egypt, the Pyramids of Giza are the best preserved and most well-known.

The Great Pyramid, which is also the oldest, was built for a pharaoh named Khufu. He is referenced inside the pyramid. For almost 4,000 years this pyramid was the tallest man-made structure in the world, and it is believed that the architect was Hemiunu, Khufu’s highest ranking official. At the time of construction it was around 146.5 metres tall (480ft) but now stands at 138.8 metres (455ft) due to erosion and the loss of its pyramidion.

The second tallest of the Pyramids of Giza is the Pyramid of Khafre, also written as Chephren. He was a pharaoh who ruled from around 2558-2532 BC. It is 136.4 metres tall. The Pyramid of Khafre was first explored (in modern times) in 1818 by Giovanni Belzoni. An open sarcophagus was found inside, but no bones.

Last but not least is the Pyramid of Menkaure, which is the smallest of the three Pyramids of Giza. Menkaure was another fourth Dynasty pharaoh. This pyramid is 61 metres tall (204ft), and the pharaoh’s coffin was found within. However, the bones inside were likely not his – carbon dating placed them at less than 2,000 years old.

Visiting the Pyramids of Giza

As the complex is home to the only remaining ancient wonder of the world, as well as being utterly awe-inspiring, many tourists are keen to visit the Pyramids of Giza. And there are a variety of ways in which you can make sure you get there!

If you’re on a Mediterranean cruise, then Port Said or Alexandria might be one of your ports. Both are around 2.5 hours away by car or coach, and you will more than likely be able to book onto an excursion that takes you to see the Pyramids of Giza alongside the Sphinx and the Cairo Museum.

There are also river cruises that incorporate Cairo and Giza as well as Luxor and Aswan – these are often smaller and more intimate than Mediterranean cruises so depending on what you’re looking for, bear that in mind.

Did you know: there is often a light and sound show at the pyramids, and other sites around Egypt. You might want to plan your trip to coincide with this!

If you are staying in Cairo and prefer a DIY-style of travel, take a private taxi from the city to the Pyramids of Giza and surrounding complex. As of 2019, Uber is available in Cairo too. If you have hired a car, there is parking available near the pyramid complex.

There are also public buses that can take you from Cairo to Giza; there is a bus stand behind the Cairo Museum, and there are a few different buses to choose from.

You can also book an organised tour to the Pyramids of Giza. There are plenty of options available leaving from Cairo, and incorporating other sites into the day. They are typically inexpensive, and having a guide with you can be helpful when it comes to knowing what you’re looking at!

Read also: Visiting the Valley of the Queens: A complete guide

There are plenty of options when it comes to staying near to the Pyramids of Giza. Some are even within walking distance of the plateau, if you can stand the heat. Here’s some picks…

Giza Pyramids Inn is literally across the street from the entrance gate of the complex. You can look out across the pyramids, so the view is an absolute win here. The hotel has air conditioning, free airport pick-up, free WiFi and parking as well as private bathrooms in all hotel rooms. There is a bar and restaurant, 24-hour check in and a tour desk – perfect for planning your visit to the Pyramids of Giza and beyond.

Pyramids Valley Boutique Hotel is 0.5 miles from the Pyramids of Giza. Again you can see the pyramids from your balcony or the rooftop terrace – there are single and double rooms, both standard and deluxe, and the property has free WiFi and parking available. There is a restaurant and a 24-hour front desk, too.

Slightly further out, although still less than a mile away from the Pyramids of Giza, is Le Meridien Pyramids Hotel & Spa. WiFi is free and there’s a pool, a separate kid’s pool, spa facilities such as a jacuzzi, massages and sauna and a fitness centre to boot. Rooms have a few of either the pyramids, or the pool area. There is a bar and restaurant as well as a snack bar and places to get coffee. For something more luxurious, this is definitely an option to consider.

For a full list accommodation and availability on your travel dates, use the map widget below.

So there’s your complete guide to visiting the Pyramids of Giza and staying in the area. It’s an absolutely bucket list experience for many people, and something you definitely don’t want to miss when travelling to Egypt!