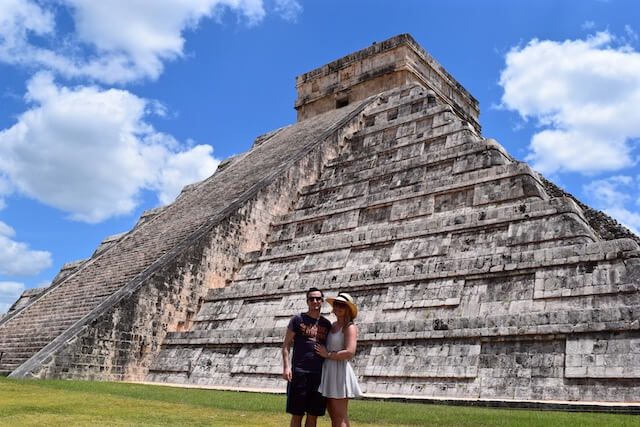 What are the new 7 wonders of the world?

The new 7 wonders of the world, officially and collectively known as the New7Wonders, are seven monuments around the world. When we travel we love to visit a ‘wonder’ (as described by Karl Pilkington in one of my favourite travel shows- An Idiot Abroad), and we also love a good ‘travel to-do-list’ to work our way through! So what’s on the agenda for our forthcoming travels? Read on to find out…

What are the new 7 wonders of the world?

The new 7 wonders of the world are a list of 7 world-famous monuments.

The new 7 wonders of the world were publicly voted for in the early 2000s by millions of people. They were selected out of a total of chosen out of two hundred.

Other finalists included Stonehenge in the UK, Red Square in Moscow, Russia, and the Statue of Liberty in NYC. Below are some details about the new 7 wonders of the wolrld.

DID YOU KNOW: the Great Pyramid of Giza in Egypt was given honorary status among the new 7 wonders of the world as it is the only surviving original ‘Seven Wonders of the Ancient World’.

In Jordan’s southwestern desert you’ll find Petra, a famous archaeological site and one of my all time favourite places that I have travelled to!

Petra was the capital of the Nabatean Kingdom and it dates back to around 312 BC. Nicknamed the ‘Rose City’ due to the pink cliffs, it is an incredibly vast area high on many travellers’ bucket lists.

TOP TIP: stay in the nearby town of Wadi Musa to be in with the chance of seeing sunrise at one of the new 7 wonders of the world.

There is so much to see in Petra. The Treasury is the famous view, a tomb carved into the mountains for the Nabatean King Aretas III. It is ginormous, and one of the first things you’ll see when you enter Petra. There are royal tombs, a colonnaded street and of course, The Monastery (Al-Deir). You can visit Petra on a guided tour, hike through the city and surrounding area or even take a cooking class here.

For more details on travelling through Jordan you can take a look at my post- Jordan: A one week itinerary.

One of Italy’s most famous buildings, The Colosseum has rightfully earned its place on the list of the new 7 wonders of the world. I loved my visit to Rome and the Colosseum was definitely the highlight of my trip!

At the time of construction, it was the largest amphitheatre in the world! It remains to this day one of the most famous in history.

Read also: What do the FCO do and how can they help me travel wiser?

Used at the time for gladiatorial contests as well as executions, animal hunts and mock sea battles, it has since been partially ruined by earthquakes and robberies.

However, it is still absolutely iconic. The Colosseum has featured in many movies, such as The Lizzie McGuire Movie, Spartacus and Gladiator. You can explore The Colosseum with or without a guide, during the day or at night, and with added extras such as going into the ‘underground’ areas.

The Great Wall of China, Beijing

DID YOU KNOW: there is a myth that says you can see the Great Wall from the Moon, but this is actually not true.

The wall was originally built by the Qin dynasty to connect the fortifications that remained along China’s norther frontier. Local resources were used, and many of the ancient sections have now eroded. Succeeding dynasties rebuilt and expanded the wall to protect themselves for invasions, too.

People have now been visiting the Great Wall for years. The Juyongguan area is a particularly popular tourist spot, and one that you would recognise from imagery over the years. You can even camp on the wall, go hiking or simply walk along at your own pace.

Located in Mexico, this is a ginormous complex of Mayan ruins. The ancient city features at huge step pyramid – known as El Castillo or the Temple of Kukulcan – and a ball court. As well as this, you will find as the Wall of the Skulls and the Temple of the Warriors. There is much more to see, too, so exploring with a guide is a good plan.

Built around 600AD, it lies over an area of around 4 miles. When excavations began in the 19th century, skeletons and sacrificial objects were found confirming the legend of the Cult of the Cenote. This was a human sacrifice to the rain god. Victims and valuables were thrown into the major cenote at Chichen Itza!

TOP TIP: visitors typically spend 45 minutes to 2.5 hours visiting here; to really appreciate one of the new 7 wonders of the world it is recommended that you take your time.

Every night there is a sound and light experience at Chichen Itza. You can even fly over the ruins! However you choose to see them, they’re not to be missed when visiting Mexico.

Whilst I thought that Chichen Itza was amazing, I actually preferred the lesser-known temple complex, Calakmul, in Mexico. You can read all about that here- Everything you need to know when visiting Calakmul.

One of the images that is synonymous with India is a view of the Taj Mahal at sunrise. Is it any wonder, then, that it was voted in as one of the new 7 wonders of the world? It would certainly get my vote…

Commissioned in 1632 and completed in 1653, the white marble mausoleum houses the tomb of Mughal emperor Shah Jahan and his wife, Mumtaz Mahal, for whom it was originally built.

YOU KNOW: the government have previously erected scaffolding to disguise the Taj Mahal from air attack threats in various wars.

The Taj Mahal is set over an impressed 17 hectares of land, and is around 73 metres tall. Millions of people visit the Taj Mahal for the incredible beauty and serenity inside and outside of the mausoleum. Whether you see the Taj Mahal in the early morning glow or under the light of the moon, you’re bound to be blown away by its iconic style.

Brazil is a beautiful country; the bay of Rio de Janeiro itself is actually classed as one of the 7 natural wonders of the world. By visiting the impressive Christ the Redeemer statue you can tick two things off the ultimate travel bucket list!

The statue is art deco, designed by Paul Landowski, a French sculptor, and built by a Brazilian engineer named Heitor de Silva Costa. He collaborated with French engineer Albert Caquot, and the face was actually created by Gheorghe Leonida. The statue was a team effort, certainly. It is 30 metres tall, with an 8 metre pedestal, and the arm span is 28 metres wide.

You can book various trips and tours that allow you to skip the line to visit the statue. Christ the Redeemer can be reached by train or you can take a taxi from the city centre, like we did.

High above the Urubamba River valley in Peru, you can find the Incan citadel of Machu Picchu. Despite the fact that nobody really knows what it was built for, it was voted as one of the new 7 wonders of the world.

It offers panoramic views, and fascinates visitors, architects and archaeologists due to its huge blocks being fused together without the use of mortar. The buildings also play on the astronomical alignments.

Admission is regulated, so booking in advance is recommended if you are planning to visit this spectacular site. You can also visit with a guide, hike up the mountain or explore the nearby jungle.

So they are the new 7 wonders of the world. All spectacular sites in their own right, they’re not to be missed if you ever get the opportunity to visit them.