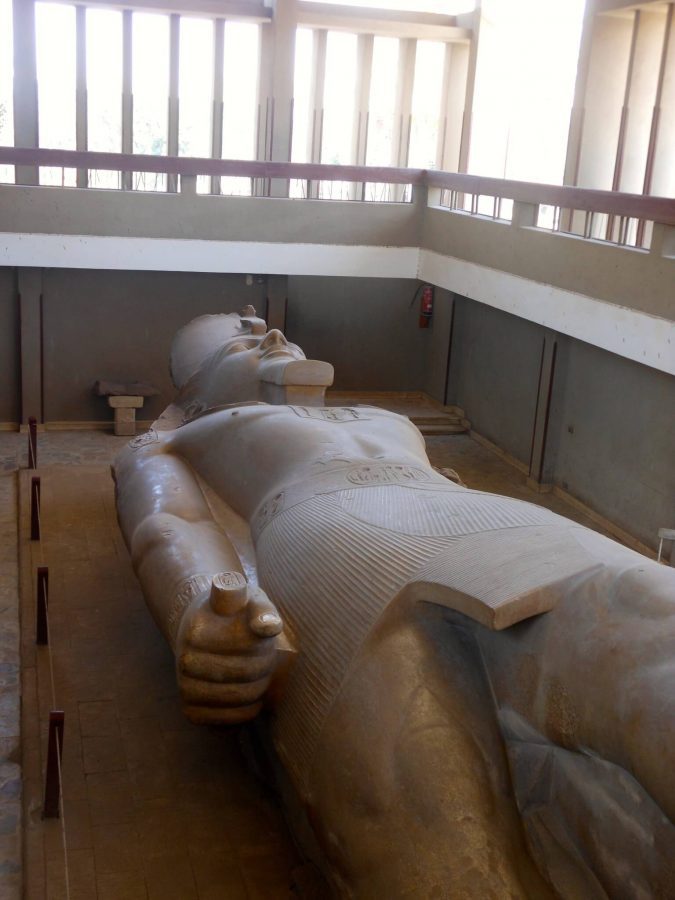 A guide to visiting Memphis, Egypt

Memphis – your mind may immediately jump to Elvis Presley and Johnny Cash, but there is another Memphis. Located in Egypt, this Memphis is an ancient city.

It may not be the most well known area to visit, but it is well worth the trip if you are staying in or near Cairo. Here’s why!

You’ll find Memphis around 12 miles (20 km) south of Giza itself, and 15 miles (24 km) south of Cairo. The city lies on the west bank of the Nile. It was the ancient capital of Egypt, also know as Inebu-hedj. This translates as the white walls. It marked the boundary between upper and lower Egypt, and thus was sometimes referred to us as Ankh-Tawy, which means life of the two lands.

Various modern towns and cities lie within the administrative borders of the historical city of Memphis, Egypt. These include:

The city of Memphis, Egypt, is said to have rivalled Thebes at one point – both politically and architecturally. In 1979, Memphis and its necropolis were added to the UNESCO World Heritage List.

Getting to Memphis, Egypt

The nearest big city to Memphis, Egypt is Cairo. To drive from Cairo to Memphis takes around 40 minutes – the suggested route is via Al Wosta. The short journey makes it a relatively easy day trip from Cairo, especially if you have hired a car for your trip.

Driving in Egypt, however, isn’t for the faint hearted so I would personally recommend booking an organised tour to take you to Memphis, Egypt. Many, like this one for example, will combine it with a visit to the Sakkara Step Pyramid. The pyramid is just north-west of the city of Memphis.

Things to see in Memphis

Memphis, Egypt is home to a lot of statues. The city is now what is known as an open museum. Visitors can wander around, feeling as though they’re stepping back in time without the confines of glass boxes and harsh lighting. There is an entrance fee of 80 EGP, which is roughly £4 (GBP) or almost $5 (USD).

Here are some the sites you can see in the ancient city of Memphis, Egypt…

It is often quiet at the museum. Many tourists skip Memphis on their tours and travels, but it is absolutely worth seeing the ancient city.

Other things to do near Memphis

One of the closest landmarks, as mentioned, is the Sakkara Step Pyramid. Its official name is the Pyramid of Djoser, and it lies just north-west of the city of Memphis. This is labelled as must-see when visiting Egypt, and you can easily combine this with a visit to the ancient city of Memphis, Egypt. There are other sites to see and things to do nearby, too…

Places to eat and drink near Memphis, Egypt

Places to stay near the city

While Cairo is your best bet in terms of hotels and hostels, there are a couple of places to stay that are closer to Memphis, Egypt. Here’s some of them…

Located near 1.2 miles from the Step Pyramid, the aptly named Sakkara View Guest House offers rooms of varying sizes, with free WiFi, an on-site coffee house and live music as well as free parking, an airport shuttle service and more. With traditional decor, beautiful outdoor spaces and stunning views, it’s the perfect choice if you’re looking to be near to Memphis.

Sakkara Inn is also nearby. There’s free parking and each room has a private bathroom; the hotel offers an airport shuttle service and there is plenty of outdoor seating space. Looking out from the terrace as the sun sets behind the Step Pyramid is bound to be a delightful experience, and it’s not far from Memphis either.

Snefru House is a holiday home located in Abu Sir, a few miles away form Memphis, Egypt. It has one bedroom but offers a sofa bed too; there is a large garden and traditional decor, with parking and your own kitchen. The views are amazing, too!

For a full list of accommodation options and availability on your travel dates, use the map below.

So there you have it: plenty of information about visiting Memphis, Egypt. Although there isn’t a lot to see, it’s worth adding it to your sight-seeing list anyway – especially as it’s so easy to get to, and is home to some practically untouched ancient history. Enjoy your trip!