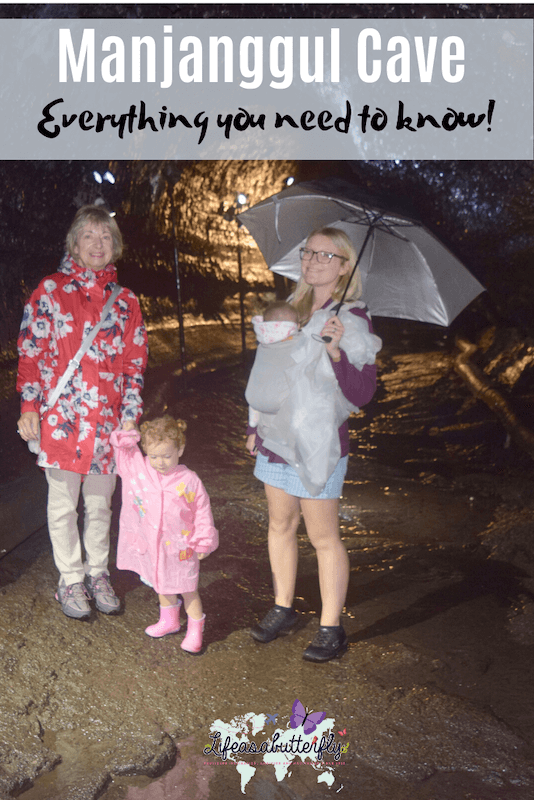 Manjanggul Cave: Everything you need to know

Manjanggul Cave is a must on any Jeju itinerary! This incredible lava tube is marvellous feat of nature that is well worth the visit, BUT there are some thing that you will need to know before your visit…. read on to find out more…

The cave is actually a lava tube – the 12th-longest lava tube in the world. It is 23 metres wide, 30 metres high and almost 9 kilometres long! Located in Gimnyeong-ri, Gujwa-eup, it is around 300,000 years old. Due to its age and how well preserved Manjanggul Cave is, it is said to have incredible scientific value. It is also a brilliant piece of heritage for Jeju!

So what is a lava tube, then? Lava tubes like Manjanggul Cave are natural conduits created by flowing lava, moving under the hardened surface of a lava flow. These tubes either drain the lava from a volcano during an eruption, or they’re extinct. If they are extinct then this means that the lava flow has long ceased, the rock has cool, and a cave has been created. This is exactly what happened to form Manjanggul Cave on Jeju Island.

How to get to Manjanggul Cave

In the very north of the island, towards the north-east, you’ll find Gimnyeong-ri. This is where Manjanggul Cave is located. Getting to the cave is easy. You can book a transfer to and from your hotel or accommodation, which is a simple and fast way of getting there and back. Or, you could do a day-long tour of the east side of the island, which will include visiting the cave.

Manjanggul Cave is accessible via public transport too. From Donggwangyang in Jeju-si, the main city centre, take bus number 101. It will cost around £1-2, and the journey as far as Gimnyeong Elementary School takes approximately half an hour. From here, you can walk the last couple of miles or get a taxi. It’s not a bad walk, and the views are nice!

Jeju itself is an easy place to get to. It has an international airport, and you can fly to Jeju from Sacheon, Gimpo, Gwangu, Daegu and Cheongiu in South Korea. Many other cities across Asia fly to Jeju too. There are also various ferry terminals in South Korea that offer a more affordable way of getting to Jeju. The island has so much to offer, and Manjanggul Cave is just one of many incredible landmarks.

Regardless of how you get to Manjanggul Cave, there are some things to note. Being a cave, it does get cold and damp – so wrap up warm.

Bring a waterproof coat, even just a lightweight one that you can carry in a rucksack. We visited the cave shortly after it had been raining and it was actually raining inside the cave! So I recommend taking an umbrella too…

Wear comfortable shoes. Flip flops are no good; walking boots, trainers or sturdy sandals are ideal. Due to the nature of the cave’s creation, the ground is fairly uneven and rocky. Be careful! There are also lots of puddles, so waterproof shoes are your best bet here.

There are three entrances into Manjanggul Cave. However, only the second entrance is open to tourists. You can only venture 1km into the cave, but this is enough to be able to see all the beauty of it. You’ll be able to spot stalactites, stalagmites, lava shelves, lava rafts and flow stones.

DID YOU KNOW: Manjanggul Cave is a UNSECO Global GeoPark.

The cave is open from 9am until 6pm until the summer, and until 5.30pm in the winter.

Manjanggul Cave is also closed on the first Wednesday of every month, so this is worth bearing in mind when planning a trip to the lava tube. We were caught out with this and ended up at the nearby Maze Land instead when we found that the cave was closed!

Most people spend around 1-2 hours at the cave.

Places to stay near Manjanggul Cave

Jeju has plenty of places to stay. The Manjanggul Cave is one of Jeju’s top attractions, but it is a little bit out of the way and quite far from where most people choose to stay on Jeju Island. So you may want to consider spending the night near by…Here are some holiday homes and villas that aren’t too far from the cave itself…

Around 2 miles from Manjanggul Cave, Jeju Olleh House is a seven bedroom house that sleeps up to 18 guests. This is perfect for large families, or for those travelling around Asia who have ended up in a diverse group of backpackers. It has a pool and BBQ facilities, as well as your own kitchen. Free WiFi and free parking are available too. There are plenty of amenities at the house, and it is clean as well as beautifully decorated.

Jeju Special Pension is also a couple of miles from the cave. It can host up to 12 guests, and has free WiFi, free parking and plenty of amenities. The beach is nearby, and there is a good-sized kitchen as well as BBQ facilities. There are beautiful views and the property is well maintained – again, a great option for large families or groups of travelling friends!

A few miles further out (approximately 6-7 miles from Manjanggul Cave) you’ll find plenty of hotels. Jeju Jukwang Resort, just a short walk from Hamdeok Beach, has everything you’ll need. A pool, free parking and plenty of outdoor space are on offer here. Each room has a private bathroom, and you can choose from family rooms, double rooms and apartments too. The staff are happy to sort taxis out for you, meaning you can easily get to the cave.

Another great option is Vizarim Resort. At 4 miles away, it is pretty close to the cave and in a great location. There are beaches and forests nearby. Free WiFi, free parking and non-smoking rooms as well as BBQ facilities and plenty of outdoor space are all on offer here. A great place for nature lovers to stay!

Manjanggul Cave is a landmark that shouldn’t be missed on a visit to Jeju – after all, it’s not every day you get to see a lava tube…