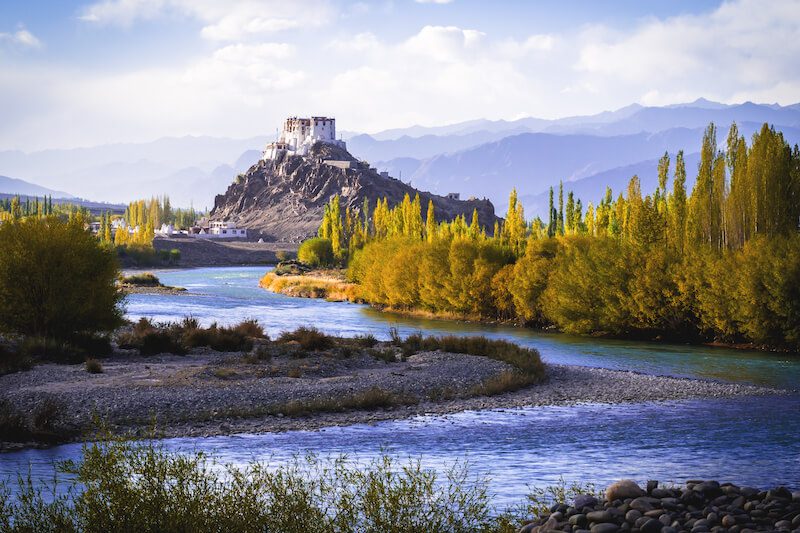 The 10 longest rivers in India

The stunning, peaceful, and beautiful rivers of India are both geographical features and spiritual symbols. A lot of pilgrimage sites along the banks of India’s rivers are special because, in ancient times, they were worshipped as physical representations of gods and goddesses.

Aside from rivers, mountains, lakes, and forests, India is full of some of the best natural features in the world. There are a number of longe rivers in India, giving the country the title “the land of rivers.” These rivers serve as primary sources of water for farming and living in the regions where they originate.

So, read on to learn more about the longest rivers in India…

The first, and most important of the longest rivers in India is the infamous Ganges. Indians consider the Ganges to be the most sacred river on the subcontinent, called Ganga in India. There’s a confluence of the Bhagirathi and Alaknanda rivers in Uttarakhand where they start in Devprayag and flow into the Gangotri Glacier.

It is believed that those who bathe in this holy river bring this sacred water home. It cleanses the soul and purifies the sins of the past. Every day, Ganga harathi is offered. The Ganga river in Varanasi contains the burned remains of the deceased. The river is lined with several steps or ghats, and boat service is available. Boating on the river is a peaceful experience.

Legend has it that Bhagiratha brought Ganga to earth and requested Lord Shiva to hold her in his hair as she descended from heaven so that her energy would not destroy the world. As the Maha Kumbh Mela happens 144 years after the Kumbh Mela, which occurs every three years, it takes place at the Kasi Viswanath Temple, located on the banks of the Ganges River.

The Ganges is threatened by pollution, which affects both people and animals. The Ganges is home to 140 fish, 90 land and water species, reptiles like the gharial, and warm-blooded animals like the Ganges waterway dolphin, both of which are on the IUCN’s endangered list.

The second of the longest rivers in India on my list is Godavari. According to the Indian Constitution, the Godavari, also known as the Dakshin Ganga or the South Ganges, is the country’s second-longest river. Starting in Triambakeshwar, Nasik, and Maharashtra, it travels through Telangana, Andhra Pradesh, and Chhattisgarh, and then joins the Bay of Bengal.

The left-bank tributaries of the river include the Purna, Pranhita, Indravati, and Sabari rivers. Several Hindu pilgrimages have stopped on its banks for very long periods of time over its 1,465-kilometre span. Nashik, Nanded, and Rajahmundry are some of the top cities along this river.

The next river on my list is Krishna. At an elevation of roughly 1,300 metres, near Mahabaleshwar in the state of Maharashtra, the Krishna river has its source in the western hills. This is one of the longest rivers in India, crossing Andhra Pradesh, Maharashtra, and Karnataka before reaching the Bay of Bengal at Hamasaladeevi. Hindus hold it in high regard.

There is a belief that bathing in Krishna’s river can make up for past wrongdoings. Along the banks of the River Krishna are a number of pilgrimage sites that include Mallikarjuna Temple, Amareshwara Swamy Temple, Dattadeva Temple, Sangameshwara Shiva Temple, Ramling Temple, and Durga Malleshwara Temple.

On the banks of the river, a fair called Krishna Pushkaram is held every twelve years.

A big part of Hindu mythology revolves around the River Yamuna, also known as Yamnotri. This is one of the longest rivers in India which originates at 4421 metres in Uttarkhand from the Champasar Glacier. Some people thought that Saptarishi Kund, a glacier lake, was its source. The goddess Yamuna is worshipped here, where a temple is located.

In Hindu mythology, Yamuna is Lord Krishna’s partner, and Yamuna and Yama are Surya, the sun godchildren. So, anyone who bathes in the Yamuna River’s sacred waters is free from death fears. The Yamuna and the Ganga are the two most revered rivers in India.

Sadly, the Yamuna River is one of the most polluted rivers in the world.

Narmada is the largest river in Peninsular India, originating in the Madhya Pradesh Amarkantak mountain range. It flows 1312 kilometres through Gujarat, Maharashtra, and Madhya Pradesh before combining with the Arabian Sea.

The Hindus revere it as a Goddess and consider it to be one of the holiest rivers in the world. In addition, it is home to many waterfalls as well as a wide variety of plants and animals.

Known as one of Asia’s most powerful rivers, the Indus reaches the Arabian Sea by traveling through the Indian state of Jammu & Kashmir and Pakistan’s entirety from its source in the northwesterly foothills of the Himalayas. Including the Indus river and five tributaries, the Indus Basin encompasses four nations with over 215 million people.

However, rapid population growth and rising hydropower and irrigation needs are placing a lot of strain on the Indus.

The Indus River, one of the longest rivers in India, has significant historical significance as the birthplace of the ancient Indus valley civilization. Mansarovar Lake is where the Indus River originates, and it flows past Baltistan, Gilgit, and Ladakh before entering Pakistan. The name India is actually derived from this magnificent river. As part of the Indus Waters Treaty between India and Pakistan, India has access to 20% of all the water carried by the river.

Indus River extends over 3180 kilometres. However, only 1,114 kilometres of that length is located within Indian territory. Kabul, Jhelum, Chenab, Ravi, Beas, and Sutlej are some of its primary tributaries.

The Angsi Glacier next to Mansarovar Lake in Tibet, China, is believed to be the source of the Brahmaputra and Indus rivers. It is only this river in India that is considered to have a male gender. As it enters India through Arunachal Pradesh, the Brahmaputra enters China as the Yarlung Tsangpo River, which is known in China as the Yarlung Tsangpo River. 916km of the river’s total length is in India; the rest is in China.

The Brahmaputra River is home to the Kaziranga National Park, which is located on its banks. Floods frequently occur during the rainy season between June and October. Then it crosses Assam and enters Bangladesh. This one of the longest rivers in India is just 916 kilometres long. In 2016, Majuli, or Majoli, a river island in the Brahmaputra River, Assam, was declared a district. It has an area of 880 square feet.

Mahanadi means “big river” in English. The River Mahanadi is one of the longest rivers in India, spanning over 858 kilometres. Chhattisgarh and Odisha rely on the Mahanadi river and the silt deposits that come from it for a lot of their livelihoods and existence.

The entire river can’t be reached by boat because multiple dams have mostly rendered it inaccessible. The river is usually a seasonal one. With the exception of the monsoon season, the river is mostly a wide stream with sandbanks on either side.

Th Kaveri is one of the longest rivers in India originates in the Western Ghats at Talakaveri in Karnataka and is also known as “Kaveri” or “Ponni” in Tamil. It travels across Tamil Nadu and empties into the Bay of Bengal at Poompuhar, also known as Kaveripoompattinam. The river divides the state in half and runs north and south before emptying into the Bay of Bengal at Poompuhar.

In the Indian state of Gujarat, there are several interesting spots along the Tapti River, which travels between the Godavari and Narmada rivers in an east-west direction. As it passes through Surat, the Magdalla ONGC Bridge crosses the river. Among the major towns on the river are those of Gujarat, Maharashtra, and Madhya Pradesh in India. These places include Multai, Nepanagar, and Burhanpur in Madhya Pradesh; Surat and Songadh in Gujarat; and Bhusawal in Maharashtra.

There are forests to the west of the city, between the districts of East Nimar and Amaraoti, which have a typical elevation of 749 meters (2457 feet). During the Maratha regime and British rule in India, Multai served as a regional hub that connected the district office in the north to Nagpur, the district headquarters.

Longest rivers in India- to conclude