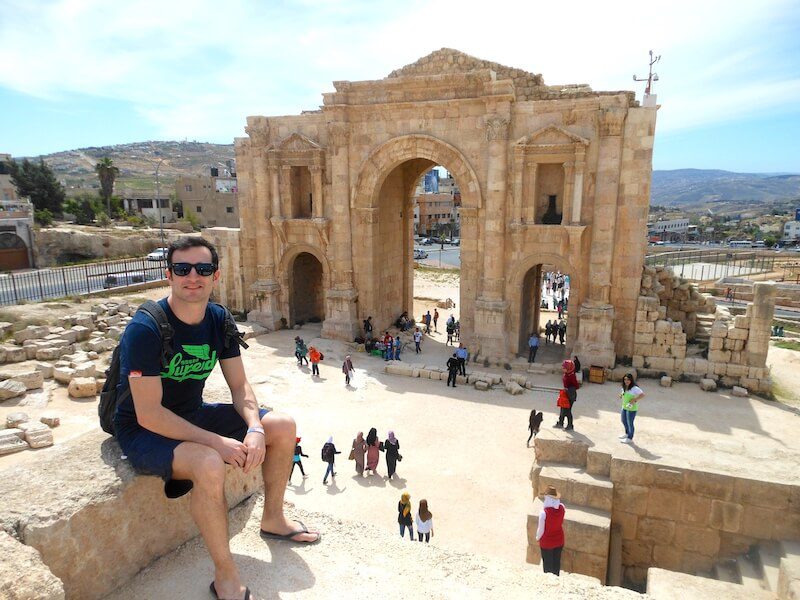 A guide to visiting Jerash, Jordan

Jerash is one of the great places to visit in Jordan! I loved Jerash- it wasn’t overly touristy and has some brilliant ancient architecture to explore. It was also super easy to reach from Amman.

In this post I will tell you everything that I learn about Jerash to help make your travel plans a little easier!

Located in the north of Jordan, Jerash is the capital city of the Jerash Governorate. It lies around 30 miles north of Amman, Jordan’s capital. Jerash is known as Gerasa in the Greco-Roman world, and historically the city is a blend of the Mediterranean Basin and the Arab Orient.

Getting to Jerash is fairly simple. The nearest airport is Queen Alia International Airport (AMM) which is in the capital, Amman. Flights arrive here from cities around the world such as Cairo, Vienna, Beirut, Istanbul and more. We flew with easyJet from London, but easyJet have unfortunately since stopped operating these flights.

From the airport, there is an hourly bus costing around £6 GBP that takes tourists and travellers to Amman Tabarbour Terminal. And from here, another bus (around £2 GBP) takes you on to Jerash. In total the journey from airport to city takes around 3 hours.

If you’re heading from Aqaba to Jerash, there are a number of ways you can do so. Take a domestic flight from King Hussein International Airport, located in Aqaba, and then follow the above steps to get from Queen Alia to the city. Otherwise, you can get a bus from Aqaba to Tabarbour, which takes around 6 hours and costs between £7 and £22 GBP, followed by the bus from Tabarbour to Jerash. It’s a long journey, but for DIY travellers or those on a tight budget, buses are a great way to get around Jordan.

In my opinion, the best way to see all of what Jordan has to offer is by hiring a car. We drove to Jerash from Amann, which took about an hour. You can also book an organised tour, such as this one.

What is there to see and do?

Jerash is mostly known for the ruins of the walled Greco-Roman settlement which lies just outside of the modern city. They are said to be the most well-preserved Roman ruins outside of Italy. Surrounded by pine forests, rolling hills and valleys full of olive trees, the ancient city was particularly wealthy due to its fertile lands and permanent supply of fresh water. However, a huge earthquake in 749AD destroyed parts of the city and left the ruins buried for hundreds of years.

DID YOU KNOW: the ruins were discovered much later, in 1806, by German explore Ulrich Jasper.

It takes a few hours to walk around the ruins at Jerash. It is offered as a day trip from Amman, or you can stay in the area (see below). There are a lot of ruins in a concentrated area, and some of the best are:

There is also the Jerash Archaeological Museum. This is home to sarcophagi, coins, statues, pottery and more. All of the artefacts have been found during the excavations that have taken place in the area of the past couple of hundred years.

Once you’ve had your fill of archaeology and history, take in a bit of local nature. The Dibbeen Forest Reserve is set in 8.5km of pine-oak hills, and is a biodiversity hot spot. There are several rare orchids here, as well as 17 endangered species. You can hike here, stop for a picnic or just drink in the incredible scenery. Animals include four types of bat, the Persian red squirrel, striped hyenas and grey wolves.

July-September are the driest months in Jerash, with December-February having a higher chance of rain. There is often between 30 and 50% humidity in Jerash, too.

Many people stay in Amman and visit Jerash as a day trip, like we did. But if you are looking to stay nearby, here are a few options to get your planning started…

Olive Branch Hotel is a 10 minute drive from the ruins. Offering single, double, triple and family rooms, it has free WiFi as well as free parking. The hotel has a pool, bar, restaurant, 24-hour check in and incredible mountain views. Previous reviews praise the friendly staff and comfortable beds.

Offering single-sex dormitories, The Blue House is ideal for solo travellers in the area. It has a shared kitchen, is entirely located on the ground floor, and has free WiFi/parking. There is plenty of outdoor seating and beautiful views, as well as clean, bright decor.

Slightly further out you’ll find Wooden Arcs Resort & Spa, which has chalets that sleep up to four. Set in the mountains, there is a spa and wellness centre, BBQ facilities, room service, a kids club, free WiFi and parking, a restaurant & bar and so much more.

For a full list of available accommodation options on your travel dates use the search box below.

Jerash really is a bucket list destination for those interested in history, archaeology and nature – it absolutely shouldn’t be missed if you’re planning a trip to Jordan!