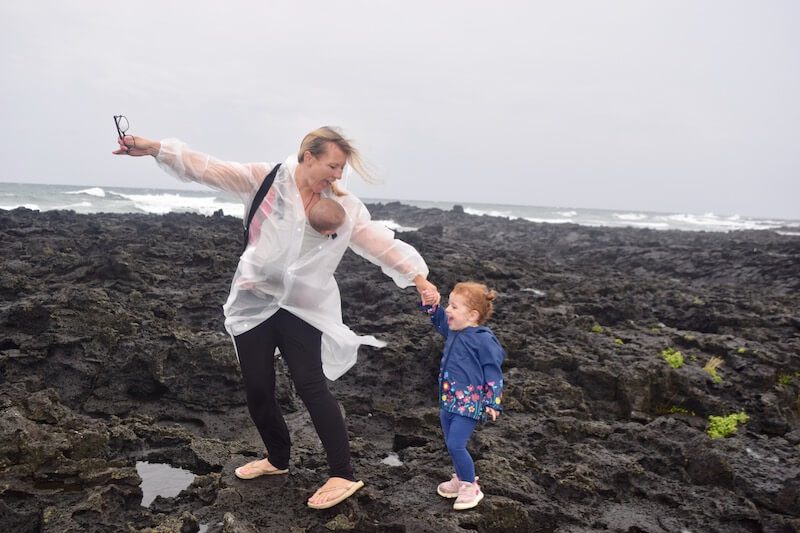 Jeju Island weather- DO NOT trust the weather forecast!

Yes, you read that correctly. DO NOT trust the Jeju Island weather forecast!!

We did… and ended up walking around in jeans and jumpers in 28 degrees… I had to strip the baby down to her nappy and we all had to wear the only sun cream that I had packed (which was factor 50- for the baby- just incase….). We lugged around 3 suitcases and a large rucksack full of clothes that we didn’t wear and spent every evening hand washing the couple of items that could be considered semi-appropriate for the weather.

Want to avoid making the same mistake we did? Read on…

Jeju Island weather is temperate humid. This means that summers are hot and humid and winters are mild.

Because of its location (by the ocean), Jeju Island weather is susceptible to more rain than the rest of South Korea. All you need to do is search Jeju Island on Google images or read a few people’s blogs to see that many holiday photos are filled with umbrellas and raincoats!

Stupidly, I didn’t do my research before booking my trip to Jeju. Sure, we had a brilliant time and you can read all about it in my Jeju itinerary post. But had I known that most of our days would be spent in heavy rain, I probably would have rearranged the trip for another time…

Anyway, back to Jeju Island weather. Below is a graph demonstrating the average temperature and rainfall on Jeju Island throughout the year.

It is important to note that these temperatures may feel cooler at times. Jeju, being an island, often experiences high winds. These winds are often cold too, which makes the temperature feel cooler than it actually is.

Why are the Jeju Island weather forecasts inaccurate?

Like many people do, in the lead up to our trip to Jeju I was checking the Jeju Island weather on the weather app on my iPhone. It did not look very appealing. My phone told me that it would be approximately 12 degrees with 100% chance of rain All day EVERY day. Eurgh.

Read also: The best beaches in Jeju: A guide for travellers

Because we had heard such wonderful things about Jeju Island, a couple of our friends in China had also booked trips to travel there during the autumn school break. One couple was so put off by the weather forecast that they actually cancelled their trip and re-booked their holiday in a totally different country!

Whilst it did rain a lot during our trip, the Jeju Island weather fortunately wasn’t quite as bad as we had anticipated. In fact, the temperatures were COMPLETELY wrong! The actual temperature was about 15 degrees celcius HIGHER than my weather app had indicated!

So why was the Jeju Island weather forecast so wrong?

Jeju has very different weather to mainland Korea and is famous for its almost constant strong winds caused to the sieving atmospheric pressures above the island. These strong winds pass over the surrounding seas capturing moisture which, when forced to rise by Jeju’s mountains, causes rain to fall.

What is the best time of year to travel to Jeju Island?

Summers in Jeju are hot and humid. This is a popular time to travel to Jeju.

However, personally, I would prefer to travel during spring or autumn. At this time of year the temperatures are warm, but the humidity is lower. Watch out for the rain during the autumn time though!

Read also: How to see the Jeju Island divers

Winters are generally pleasant, although a bit chilly! There may be some snow on the highest peaks, such as Mount Hallasan. Whilst it wouldn’t be the ideal time to lay on the beach, winter can be a great time to explore Jeju Island. There are also far less tourists during this time.

The typhoon season occurs in late summer (there was a typhoon during our visit in early October), but Jeju rarely experiences truly destructive typhoons.

Is Jeju Island a good place for a beach holiday?

Many people to choose to travel to Jeju for a beach holiday. The best beaches in Jeju have gorgeous white sand, large stretches of peaceful shoreline and a range of amenities.

Instead, many people prefer to travel to Jeju for a beach holiday during the spring or autumn months. During this time the weather is cooler and the humidity is lower.

Does it rain a lot on Jeju Island?

Does it rain a lot in Jeju? Well, yes. Jeju has the highest amount of wet days in Korea.

Like the rest of Korea, Jeju island is affected by the monsoon circulation: in winter, the northwest cold currents prevail (which are initially dry, but before they reach the island, they have to pass above a stretch of sea quite large).

During the summer months the Jeju Island weather is hot and humid, with warm currents of tropical origin prevailing.

The spring and autumn months are known as transitional periods. This means that the Jeju Island weather is mild and pleasant.

On average, Jeju Island experiences 1500mm of rain each year in the north part of the island and 1900mm in the south and east of the island.

Basically, you can experience rain in Jeju at any time of year! I recommend that you take a light weight rain coat with you on your trip. We were in Jeju during a monsoon and my little rain coat was a life saver! And it was even big enough to protect the baby from the rain too! You can find a pocket size raincoat like mine on Amazon here.

Does it snow on Jeju Island?

In January 2016, there was an unusual snowfall of 12 cm. This was the most snow that the island had seen since 1984. The island experiences lows of -5.8degrees C during this time. The snow led to the closure of the airport.

Things to do in Jeju when it rains

If the Jeju Island weather isn’t in your favour during your holiday and rain does it, fear not! There are still plenty of things that you can do to keep yourself occupied! Jeju is also the perfect place to visit if you have a South Korea 5 day itinerary – as it’s near other amazing places in South Korea.

Read also: Everything you need to know when visiting Seongsan Ilchulbong

Did you know that Jeju Island has over 100 museums? These range from sex museums to chocolate museums to teddy bears museums and there is LOADS to keep you entertained on a rainy day.

Here is a list of the major museums on the island:

The best time of year to go hiking on Jeju Island

Many people who travel to Jeju Island are interested in hiking. Whether they want to embark on the famous Olle trails or climb Mount Hallasan, there are many options for hiking on Jeju Island.

However, many people would rather not hike in the rain, especially if it is heavy rain!

Whilst there is a chance of rain year-round, chances of rain are highest in late summer, when the monsoon season is in full force. This shouldn’t necessarily put you off travelling to Jeju at this time, but I recommend keeping your itinerary flexible, in case the skies open on the day(s) that you want to go hiking!

Jeju Island weather: When should I travel?

As you can see, the Jeju Island weather is warm year-round but it is subject to high humidity in the summer months and lots of rain during the typhoon season.

My advice is to travel to Jeju Island at which ever time suits your schedules best, BUT if this coincides with the rainy season then don’t forget to pack your rain coat and remember to be flexible with your itinerary!

Lastly, DO NOT TRUST THE JEJU ISLAND WEATHER FORECAST! Don’t walk around sweating in jeans and a jumper like I did, wasting every evening hand washing your clothes! Pack a range of clothing types and don’t be misled by low temperature forecasts that may well be taken on the top of the mountain!

Why Is Alhambra Palace Famous? Situated on the Sab

The best family hotels in Sanur

Are you looking for the best family hotels in Sanur? Bali is on everybody’s bucket list. No matter who you travel with, you are bound to have a fantastic time in this slice of paradise. And while the Instagram pictures might portray it as somewhere for a backpacking...

There are so many brilliant Bali facts that I can't wait to share with you. After making several trips to this spectacular island I have come to love Bali and so will you once you have learnt more about it in this article! No island has travellers quite like Bali. To...

Are you looking for the best Koh Lanta hotels for families? Then you have come to the right place! There is a huge variety of accommodation in Ko Lanta. When travelling with kids, it is important to have as much information as possible to make the best choice for your...

There are so many fascinating facts about Italy, from Italy's incredible landmarks to the history to the culture, there is plenty to learn about this wonderful country. Italy tops the list of many tourists with the world's most spectacular cities, soaring mountains,...