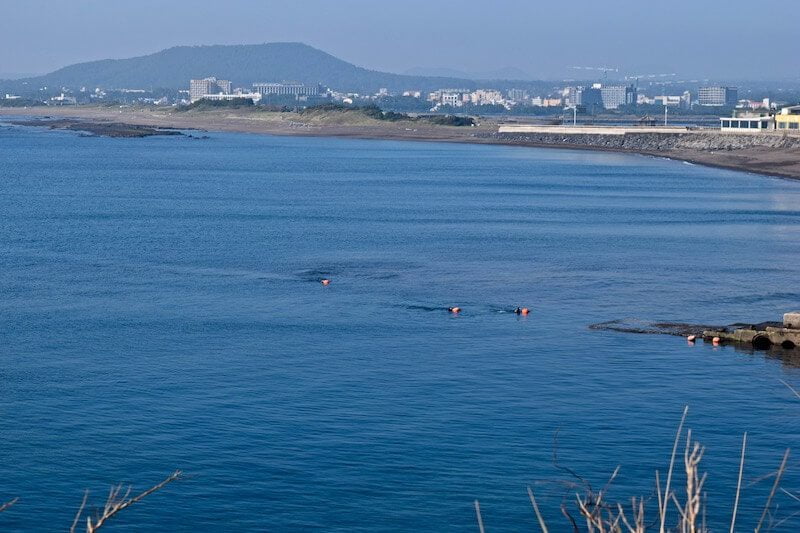 Jeju Island divers: Why you should visit Korea’s incredible mermaid ladies on your trip to Jeju

The Jeju Island Divers were one of the aspects of my Jeju travels that I found most interesting! I had seen a TV show about these remarkable women some years ago, but I hadn’t put two and two together when I booked my trip to Jeju.

The famous Jeju Island divers are a massive draw for people from around the world. They are a unique and fascinating culture. Are you interested in learning more about these incredible mermaid ladies? I explain all in this blog post…

Who are the Jeju Island divers?

Also known as the Haenyeo, the Jeju Island divers are a group of women who free-dive for seafood. They are representative of the semi-matriarchal family structure that exists on the island, and are known for their iron will and determination as well as their free spirit.

Girls would traditionally start training to become Jeju Island divers at around the age of 11. They would start by learning in shallow waters, slowly getting deeper as they got older and more experienced. By 18, after seven years of training, they would be considered a fully fledged haenyeo.

Numbers are steadily dropping, now, so the majority of Jeju Island divers are over the age of 50 with new (and young) recruits being few and far between.

DID YOU KNOW: The Jeju Island divers can hold their breath for over three minutes, diving to around 30 metres deep! Wow!

The Haenyeo can spend around 5-6 hours at a time in the water, even in winter. Modern day wetsuits are essential for this; when wearing cotton swimming costumes, the women could only stay in the water for one hour in the winter (before a 3-4 hour break by a fire) and around 3 hours during the summer months.

They don’t use many tools. Typically, the Jeju Island divers will wear a wetsuit, diving mask, gloves, fins (flippers), and chest weighs. They will carry an L-shaped weeding hoe as well as a net, which is attached to a flotation device.

The Haenyeo in history

While diving in Jeju dates back to around 434 AD, it was exclusively male in the beginning. It wasn’t until the 17th century that women joined the Jeju Island divers, according to history, and they were first known as jamnyeo. This translates literally as ‘diving women’.

However, by the 18th century, there were more women than men diving in and off Jeju. Nobody knows what the major reason for this big shift was – it could have been due to men dying at sea, or women having more subcutaneous fat, or because of higher taxes. But regardless, the Jeju Island divers became part of a female-dominated industry.

Many of the women started to replace their husband as the breadwinner in the relationship. This was especially true when, in 1910, Korea was colonised by Japan. Where the Jeju Island divers would previously have given most of their catch to the Choson government, the Japanese put an end to this. The Haenyeo were now able to make a profit from their harvest. Because of this, the female Jeju Island divers often naturally became the head of the household!

Read also: The best waterfalls to visit in Jeju

As briefly mentioned above, the divers are a leading factor in the community’s semi-matriarchal society. When the women became the breadwinners, the Haenyeo were the head of the household. They brought in the money, and they went out to work every day.

Of course, this meant roles were reversed and this extended to wider society too. Men would take care of the children, look after the home and do the shopping. Families would celebrate the birth of girls, rather than boys – a clear break from tradition! Not only that, but men would pay a dowry to family of the bride rather than the other way around.

What do the Haneyeo catch?

During their 30-metre dives, the Jeju Island divers catch a variety of seafood. This includes, but is not limited to, the following:

They sell it, both at markets and to tourists who are able to see the Haenyeo in action. And of course, they use it to feed their own families too!

Dangers for the Jeju Island divers

There are certain dangers the Haenyeo must contend with. Free diving comes with health risks such as nitrogen narcosis, decompression sickness and barotrauma of the ears, eyes, lungs and sinus. There is always the risk of drowning or blacking out, too.

Jellyfish and sharks provide a danger to the Jeju Island divers, though not a particularly huge one. Poor weather is a big risk for the divers, in terms of physical danger and also in restricting their ability to work, catch and make money.

While there aren’t as many Jeju Island divers as there used to be, there is still a lot of interest in the women. Jeju has a museum dedicated to the divers: the Jeju Jaenyeo Museum. This is full of images, equipment and stories to help visitors learn more about the women. Open daily from 9am (except the first Monday of the month, when it’s closed), the museum takes 1-2 hours to walk through and really teaches you about the Jeju Island divers. By visiting the various beaches across Jeju, you can often see the women in action too!

In 2015, the government of Jeju were keen to preserve the divers and spent billions of won to do so. They subsidised the costs of wetsuits and provided insurance for the divers, allowing them to continue doing what they do. Jeju are proud of the Haenyeo and the tradition of diving on the island.

A year later, in 2016, UNESCO awarded the Jeju Island divers a place on the Representative List of the Intangible Cultural Heritage of Humanity. This is an incredible honour, and a reminder of the importance of what the Haenyeo do for Jeju.

So, there’s everything you could possibly need to know about the Haenyeo. Korea’s mermaid ladies are such an important part of Jeju’s culture, and so fascinating to learn about.