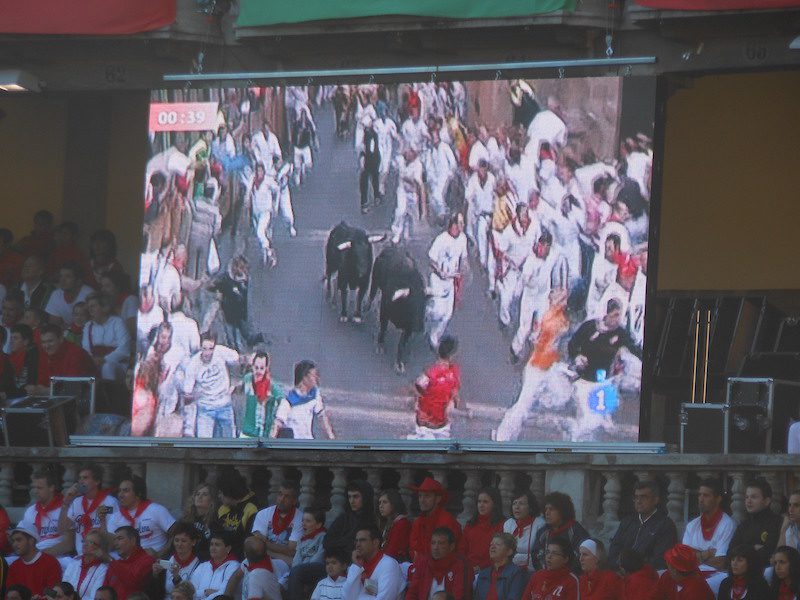 A brief history of the running of the bulls

The history of the Running of the Bulls is is a pretty interesting, and it is what has resulted in the booming tourism industry that Pamplona welcomes each year.

The running of the bulls is a major global event, and bull-running brings plenty of tourism to Spain, and Portugal as well as some areas of both Mexico and the south of France.

But what exactly is it? Read on to discover a brief history of the running of the bulls…

What is the running of the bulls?

To understand the history of the running of the bulls, we first need to look at what it is.

Bull-running refers to events that involve running in front of a small group of cattle (usually between six and ten) that have been allowed to run freely.

This takes place in a sectioned-off area of a town’s streets. Generally, bull-running occurs in the summer as part of a festival or carnival type event.

The most famous bull-running event, often referred to as The Running of the Bulls (capitalised) in English, takes place in Pamplona.

The event occurs during San Fermin, a nine-day festival to honour Saint Fermin. The festival is celebrated in early July.

Over one million people usually attend and it is one of the most internationally renowned festivals across Spain. It is well-known by English people too, as it is important in the plot of Ernest Hemingway’s The Sun Also Rises.

A brief history of the running of the bulls

The history of the Running of the Bulls is a pretty interesting one, that can be broken down into three sections- the birth, life and maturity.

The birth of the Running of the Bulls

It is thought that bull-running goes back to the 13th century.

We don’t know the exact date that the Running of the Bulls festivals originated, but we do know that it didn’t have an awful lot to do with Saint Fermin (San Fermin).

Saint Fermin was a Bishop in Toulouse, France and lived much of his life in Pamplona, Spain. He lived during troubling times and both he and his predecessor were brutally murdered (beheaded).

Following his death, myths developed about his life, and death. Legend has it that he was a Bishop in Pamplona and that Saint Fermin’s grave emmitted a sweet smell that melted snow, made flowers grow, healed the sick, and made trees turn toward him as if they were bowing.

What does all this have to do with the history of the Running of the Bulls, I hear you ask?

Well, it appears that the bull fighting events and the celebration of Saint Fermin’s life merged together over the years, and misinformation meant that there was little clarity about what the purpose was of these specific events.

By 1952 there was one clear singular event celebrated each year and during this year it was moved from September to July, when the weather was better.

So, if the origin of the bull run itself had little to do with St. Fermin, then what was it all about?

In actual fact, it stemmed from cattle herding. At the beginning of the 1000s, herders would transport their cattle from their rural farm yards to the city centre, where the market and bull ring were located. On route, people would clear a pathway for the bulls to walk through.

Over time, random men from the city began to join in with the herding and chase the bulls down the street. Over time, this became a local tradition….

And that was the birth of the Running of the Bulls!

The life of the Running of the Bulls festival

As time went on, bull-running became more and more of a spectacle. Events got bigger and eventually It is was broadcast on live TV.

Tourism started to gain traction in Pamplona and domestic tourists arrived from nearby cities in Spain to partake in the festivities each year.

The Running of the Bulls entered the international stage following the publication of Earnest Earnest Hemingway’s book The Sun Also Rises (now also available as a film) in 1926.

Hemingway loved Pamplona and his travels to the city inspired the production of his novel, where he provided a romantic depiction of the festival. Hemmingway can also take credit for the term Running of the Bulls, which had never appeared in print prior to the publication of his book.

Maturity of the Running of the Bulls

Just as Butler outlines in his Tourism Area Lifecycle, all destinations will eventually reach maturity, when they will then either decline or rejuvenate. Right now, the Running of the Bulls and subsequently, tourism in Pamplona, is in decline.

The Running of the Bulls festival has seen mass tourism and overtourism in recent years, which has had problematic impacts on the local environment and society.

Furthermore, the concept of bullfighting has become somewhat controversial, with animals rights and protection being much more in the forefront of people’s minds than it once was.

The history of the running of the bulls is a little chequered.

Bull-running isn’t particularly safe – surprisingly! Earlier numbers are unknown but since 1924 the St. Fermin festival in Pamplona has seen the deaths of 14 people due to the running of the bulls.

The number outside of this particular city is unknown too. However, it is likely that there have been hundreds of deaths caused across Spain, Portugal, Mexico and southern France due to bull-running.

It is not just the bulls themselves that pose a danger. The slippery cobblestone streets are a hazard, and the amount of adrenaline you would have pumping through your veins before, during and after the running of the bulls is a lot.

Foreign visitors to Pamplona and beyond like to partake in the running of the bulls as it is an ‘exotic sport’ and poses a lot of excitement. But they are just not prepared for it in the same way that the Spaniards are.

Some rules of bull-running

There is a rule in place that if a person is struck down by a bull they should stay on the ground. In 1995 Matthew Tassio, however, did not. He got up again and was then struck by a second animal which gored him to death.

There is also a lot of drinking at the San Fermin festival. You are not technically allowed to partake in the running of the bulls if you have been drinking but sadly this is a rule that often gets broken. Again, this tends to be by tourists. This is simply because they often don’t understand the cultural significance of bull-running and see it as an adrenaline rush similar to bungee jumping or riding a big rollercoaster.

Runners should be 18+. However, in 2007, a 10 year old boy was seen partaking in the running of the bulls. His mother – along with everybody watching the event on TV – was horrified. The boy’s father lost his visitation rights and had to pay a €200 fine for allowing the child to participate.

Is running with bulls safe for tourists?

When it comes to watching the running of the bulls in Pamplona or elsewhere, it is perfectly safe for tourists. You can watch it on TV at your hotel, or from a safe distance with the locals.

However, if you want to partake in the event, then this is a totally different story. In fact, there have been several people who have died as a result of taking part in a bull running race. Watch then video below and you will see why…

History of the Running off the Bulls: To conclude