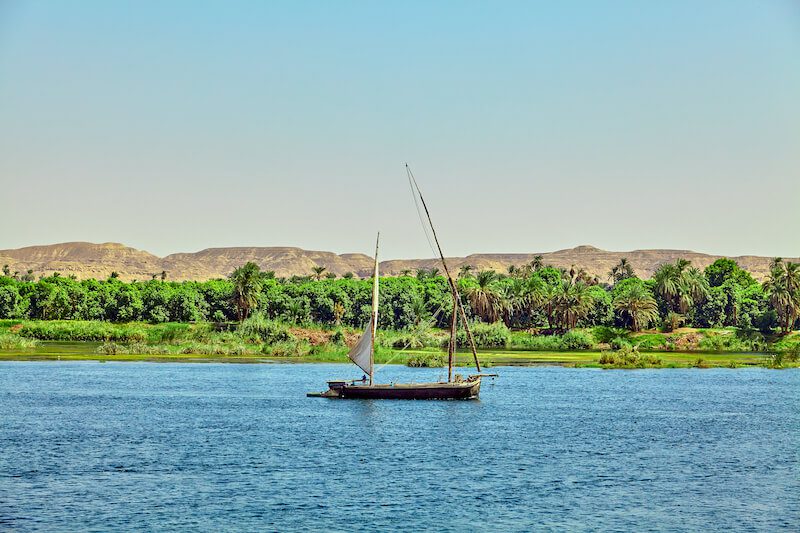 Water transport, or maritime transport, refers to the use of vessels or vehicles to transport people or goods via water – whether that be a sea, ocean, lake, river, canal or other body of water. It has a long history and is still used today on a daily basis for recreational, military and trade purposes.

Looking at the very early history of water transport involves looking at when the first boat was invented. Records suggest that boats have been in use for a long time. The oldest recovered boat is the Pesse canoe, found in the Netherlands, which was made from hollowing out a tree trunk somewhere between 8200 and 7600 BC. Presumably this was used to transport something, so it can be said that this was the very start of the history of water transport.

We know that the Ancient Egyptians were using wooden boats called Feluccas from around 3000 BC, to transport coffins, grains and much more. Prior to this, however, they were using boats made from bundles of papyrus reeds, tied together really tightly.

By around 1000 AD, the Austronesian people in the island regions of Southeast Asia were engaging in maritime trade with citizens of China, the Middle East and South Asia. They are said to be the ones to introduce sailing technology and techniques to these areas. Records suggest that they used boats known as ‘kunlun bo’ which translates to ‘ship of the Kunlun people’, with 4-7 masts and the ability to sail against the wind thanks to tanja sails.

The history of water transport in the Viking era

We know that the Vikings were keen on boats and used them as their primary form of transport – making them a key figure in the history of water transport. Their history can be traced back to around 793 AD.

Fjord Tours say Some of the earliest ships discovered were the Oseberg, the Gokstad, and the Tune. These ships were not as specialized as the ships that would be created after them. So, it appears that they were used for everything from transport to battle.

By the end of the 9th century, specialization of the ships had begun. Around this time, the Vikings started to create warships. Warships were longer and slimmer than previous boats the Vikings had built, and although the name might inspire visions of epic sea battles, the warships were actually used for something altogether different. Due to their shape and size, these vessels were able to navigate sheltered waters where they would drop off the Vikings at a point of interest. From there, the Vikings could discreetly enter their target location. The warships were designed for a quick getaway once the Vikings had obtained the loot from their target location.

The Arab age of discovery

At the same time as the Viking era, the Arab Empire was expanding their trade network across Asia, Europe and Africa. During the 8th-12th centuries they were the world’s leading economic power, it has been said. Many rivers in the Islamic region were unnavigable. Due to this, transport by sea was very important; using a compass and a kamal, sailors during this period could sail across oceans rather than just along the coast – cutting the time it took to get from A to B. Sea trade allowed for the distribution of food and supplies to feed entire nations of people in the Middle East. And long-distance sea trade meant the importation of raw materials for building and luxury goods for wealthy citizens. They used ships called a qarib, which would go on to inspire the Spanish caravel.

The history of water transport continued

From the 14-1500s, water transport was key in what is known as the general Age of Discovery. This was Christopher Columbus’ era, when European ships sailed across the world searching for new trading routes. Other big names in maritime history around this time include John Cabot, Juan Fernandez, Jacques Cartier, Richard Hakluyt and Vasco da Gama. Around this time, the favoured type of boat was a wooden sailing vessel with 3-4 masts. It wasn’t just these explorers who used them but traders and the military.

We can, from here, start to see a much more heavily documented timeline of boats, ships and other forms of water transport. For example, also in the 1400s was the invention of the yacht – by the Dutch, who used these for chasing pirates and criminals as well as for Naval purposes. They were then co-opted by rich ship owners, who would use them for celebratory sail-outs when their ships came back – hence why they are now a symbol of the elite. In 1660, Charles II used a yacht to carry him to the Netherlands from England for his restoration.

Because of the growth in trade routes, boats and ships around this time were being constantly developed and improved. They needed to be bigger and stronger, and able to travel for longer periods of time.

Fast sailing ships called Clippers were built in the 1800s, and they had long slim hulls and tall masts. A few years later, in 1818, the Black Ball Line shipping company started offering a passenger service from the United States over to England. The group was founded by Quakers who had four packet ships, and the transatlantic passenger crossing ran between New York City and Liverpool. It wasn’t particularly popular at first but by 1822 they were running two crossings per month for 35 guineas per person; this led to competition from the likes of Red Star Line.

At the same time, the first steam powered ships were able to cross the Atlantic Ocean too. Innovations in the history of water transport were coming thick and fast in the 1800s; by around 1845, the first ocean liners built from iron appeared. They were propeller-driven, instead of using sails.

It was, however, also around this time that canals became less of a popular way to transport goods and people – this was thanks to the establishment of good working railways.

Again, innovations continued. Diesel became an easy way to power ships – oil seemed to work better than steam. However, steam was still in use for some time alongside the new diesel-powered ships; it was in 1912 when the famous tragedy of the Titanic took place.

We also saw a lot of new water transport inventions in the 1900s: hydroplanes, hovercrafts, and nuclear-powered cargo ships like the N.S. Savannah which sailed for 3.5 years without having to refuel. The 1900s – or, more specifically, the 1980s – also saw the introduction of container ships. These large and strong cargo ships allowed vast amounts of cargo to be carried in mental boxes known as containers; around 90% of non-bulk cargo is carried on container ships today.

Cruise ships also rose to prominence in the 1900s. The first ever cruise ship was created in 1901; it was German and you can read about it here. However, it wasn’t until the 1990s that cruising became more commonplace and more accessible. They were able to carry hundreds if not thousands of people – like floating holiday villages. Over time they have become more and more impressive with their own cinemas, water parks and go-karting tracks alongside the multitude of bars and restaurants each one has on board.

Boats and ships obviously played a huge part in both of the world wars, which were two important time periods in the history of water transport. Thousands of water transport vessels were used in each war – for battle, for transporting goods to armed forces in different places and so on. During WWI, around 2100 ships were sunk and 153 U-boats were destroyed. And during WWII, around 3,700 ships were sunk a further 783 U-boats destroyed.

Individual crossings of the Atlantic Ocean

Ann Davison was the first woman to sail across the Atlantic alone, doing so in 1952. More did so in the 1960s and then, in 1965, Robert Manry made it across without stopping in a sailboat named Tinkerbelle. Later, in 1980, Gérard d’Aboville rowed single-handedly across the Atlantic Ocean – this feat was accomplished by a woman eleven years later, when Tori Murden did it.

The history of water transport

There is a lot to say about the history of water transport – from the first rudimentary boats to the super cruise ships of today. Water vehicles have long been used to transport goods and people across bodies of water, and while air and rail transport are popular now it seems that water transport remains a brilliant way to get from A to B.