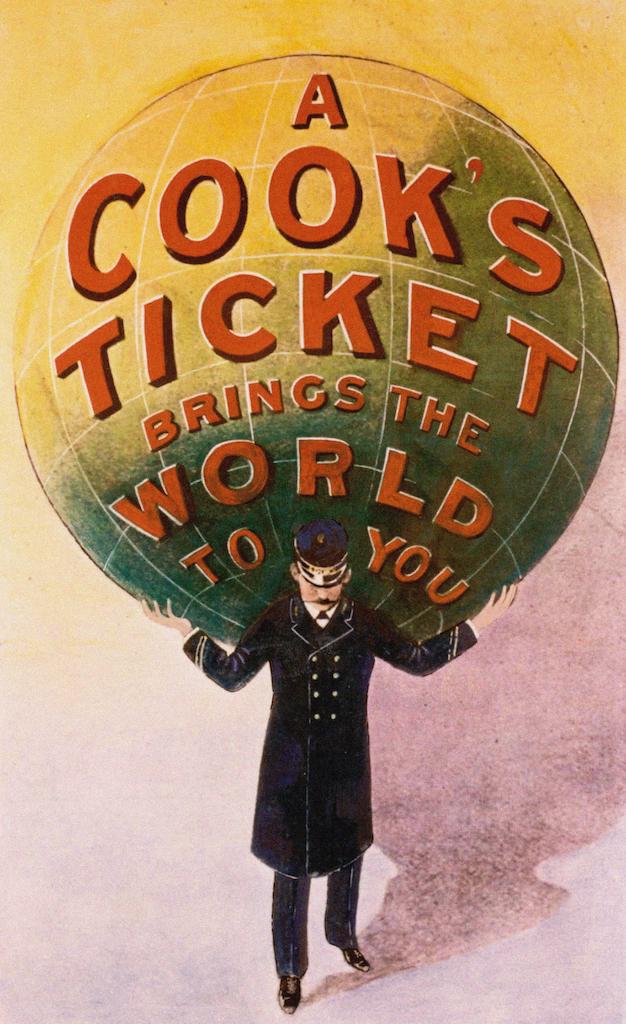 The fascinating history of Thomas Cook

In this article, we take a look at the history of Thomas Cook in order to understand why this company is such an important part in the overall history of tourism.

The history of Thomas Cook: the very beginning

Thomas Cook wasn’t just a company- there was a face behind the name! Thomas Cook himself was born in 1808 in Melbourne, Derbyshire, in the UK.

Business-minded from an early age, he started working for a local gardener at the age of 10. He earned six pence per week. At 14 he started an apprenticeship with his uncle, John Pegg, and worked for five years as a cabinet maker. He also became a Baptist missionary in 1826, touring the area as a village evangelist.

Later, in 1832, Thomas Cook moved to Market Harborough. On New Year’s Day 1833 he took the Temperance pledge. This meant he was part of a movement against the consumption of alcohol. Cook hosted meetings and held anti-liquor processions.

While walking to a Temperance Society meeting, Thomas Cook had an idea.

He decided, due to the extended Midland Counties Railway, that he would take a group of his fellow campaigners from Leicester Campbell Street Railway Station across to Loughborough to attend a teetotal rally. It was an 11 mile distance.

On July 5th 1841, Cook took around 500 people to this rally. They each paid one shilling for the privilege of a return journey with food and entertainment. He saw an instant demand for more of the same and the history of Thomas Cook begun…

Over the next few years Cook planned and executed various excursions.

In August 1845 he took a group from Leicester to Liverpool, having visited himself beforehand to arrange deals with hotels and restaurants as part of the overall trip experience for his clients.

In 1846 he arranged for 350 people to travel from Leicester to Scotland.

And four years later he arranged his first ever trip abroad. This was a grand circular tour of Belgium, Germany and France with the final stop being Paris for a special exhibition.

The history of Thomas Cook & Son

In 1865, Cook got some business premises in London on the famous Fleet Street. This was always an important through route in the city, with businesses having been established here since the Middle Ages. It eventually became the home of British national newspapers, which it remained until the 1980s.

The history of Thomas Cook as a brand was born on Fleet Street. It was an office for Cook but also a shop: it sold guide books, footwear, telescopes, luggage and other travel essentials and accessories.

Cook introduced the hotel coupon in 1868, refining the business model. Essentially, Thomas Cook had a list of businesses (hotels as well as restaurants) and customers could buy a coupons which were to be exchanged for a meal or overnight stay at one of these establishments.

Seven years after opening the Fleet Street office, in 1872, Cook decided to partner up with his son, John Mason Andrew Cook, who was already working for him. Together they renamed the travel agency to Thomas Cook & Son. John provided a lot of commercial expertise, which allowed the company to grow.

Cook also opened a temperance hotel with his wife, Marianne Mason, located above the office.

A lot was happening at once. In 1866, the year after the Fleet Street office opened, the history of Thomas Cook moved slightly further afield.

The agency launched escorted tours of the US for British travellers, and they were the first to do so! John was the one to lead these excursions, which included tours of Civil War battlefields and more.

Later, in 1871, a partnership was born: Cook, Son and Jenkins. This was with an American businessman, but it didn’t last long and is largely forgotten about.

Also in the 1870s, Thomas Cook & Sons led the first ‘round the world’ tour. It left London in late 1872 by steamship – this headed across the Atlantic. Once in America the group boarded a stage coach. They then took a paddle steamer to Japan, then travelled overland across China and India. A lengthy trip, of course, but a fascinating one nonetheless!

In the 1880s, when Thomas Cook himself had retired, John and his three sons grew the company even more. They were involved with military transport while organising tours to and of the Middle East; in 1884, the British army were transported up the Nile by Thomas Cook & Son – something quite big for the business!

By 1888, there were offices around the world. The history of Thomas Cook is one that started in Leicester and before long, was present in Australia, New Zealand and many other far-flung corners of the globe.

The history of Thomas Cook’s other successes

There are plenty of other things that Thomas Cook as a brand introduced to the travel industry.

For example, in 1874, Cook introduced something he called ‘circular notes’. These were essentially early travellers’ cheques, which offered people a secure was of using currency abroad without having to carry large amounts of cash around at any one time. The idea went on to be really popular.

Cook’s Continental Timetable launched in 1873 as a quarterly publication. It moved to being published monthly later, in 1883, and is now known as the European Rail Timetable. It was proposed by Thomas Cook employee John Bredall who thought it would be wise to publish a compendium of timetables for steamships and trains across the European continent. A softcover book, it shows all major lines and most minor lines too. Publishing was suspended in August 1939 due to World War II, and it picked up again during 1946.

It is still published today under its new name – but Thomas Cook stopped publishing it in 2013. A new company, European Rail Timetable Ltd, was born; owned by John Potter, a former member of editorial staff for the timetable, it still makes the book today. This is alongside the digital version which launched in 2016. The timetable comes highly recommended by tourists and business travellers as well as book shops, librarians, travel agents and high-profile travel writers.

The modern history of Thomas Cook

What started as a family business didn’t stay that way. During the Edwardian times, travel became a much more popular activity and the business (now being run by John Mason Cook’s sons) was going extremely well. However, they sold the business to Compagnie Internationale des Wagons-Lits et de Grandes Express Europèens in 1928. This was the company who operated the Orient Express.

During World War II, however, the Paris HQ of Wagons-Lit was taken by the Germans after the Fall of France. The British assets were also taken over – by the Custodian of Enemy Property, who handled property claims created by war. Later, in 1942, Thomas Cook & Son was sold to Hays Wharf Cartage Company, which led to the company (Thomas Cook) being nationalised in 1948. It was part of the British Transport Commission.

In the 50s, the history of Thomas Cook and package holidays was solidified. The worked with scheduled (charter) airlines to sell all-inclusive tours to foreign destinations such as France, Italy, Switzerland and Spain. However these trips weren’t particularly cheap as the company didn’t want to compromise on quality. This led to a loss in share prices, and eventually the company was denationalised again in 1972.

It was now owned by a consortium made up of Trust House Forte, Midland Bank and the Automobile Association. Five years later in 1977, Midland Bank acquired sole control of the Thomas Cook and started to move administrative functions to Peterborough. By this time, the company was no longer known as Thomas Cook & Son, Ltd. It was now Thomas Cook Group Ltd.

It was during the 80s that Thomas Cook was really successful in the US. This was partly due to the aforementioned travellers’ cheques, and a whole US division of Thomas Cook was eventually sold for $1.3 billion in 1989.

During the 90s, Midland Bank was acquired by HSBC. They sold the Thomas Cook company to WestLB, a German bank, and the charter airline LTU Group. Amex bought the corporate side of things in 1994, and in 1999 the Carlson Leisure Group merged with the Thomas Cook Group Ltd.

By this time Thomas Cook had become a household name. They thousands of travel agencies and tour operators in the UK and partnerships around the world. The organisation demonstrated both vertical and horizontal integration, meaning that they had a significant market share and control over the market. There were many subsidiaries of Thomas Cook too.

The collapse of Thomas Cook

Most recently in 2019, Thomas Cook collapsed.

The collapse of Thomas Cook led to various holidaymakers having to be repatriated and thousands of future holidays being cancelled. There were many potential causes of the collapse: Brexit uncertainty, of course, as well as high fuel costs, terrorist attacks and more. Hays Travel acquired all 555 of the UK Thomas Cook stores and were able to save around 2,500 jobs.

The collapse of Thomas Cook shocked the world. The history of Thomas Cook was long and the company had established itself as a key player in the tourism industry marketplace. There is not one reason why the company collapsed, but rather a plethora of reasons. Perhaps they were not innovative enough in their thinking.

They could have implemented more niche tourism products and focussed less on mass tourism, for example, as there is clear evidence that consumers have been moving in this direction for some time. But hindsight is a wonderful thing I guess, and we will never know what ‘could have been’.

The future of Thomas Cook

So does Thomas Cook have a future? Well, maybe- but not in the same way that we have known and loved Thomas Cook.

While 2020 was been a disastrous year for much of the travel industry, it did see the ambitious relaunch of Thomas Cook Tourism by Fosun International, an online travel company with 50 employees.

Fosun was already a Thomas Cook shareholder. The company paid around £11 million for the company trademarks, social media accounts and websites in November 2019. There is certainly a lot of scope for online. products and services in the future, so we will see what the future has in store for the new ‘Thomas Cook’, it will be interesting to see how this new venture pans out…

If you want to learn more about the fascinating history of Thomas Cook, I recommend the following resources: