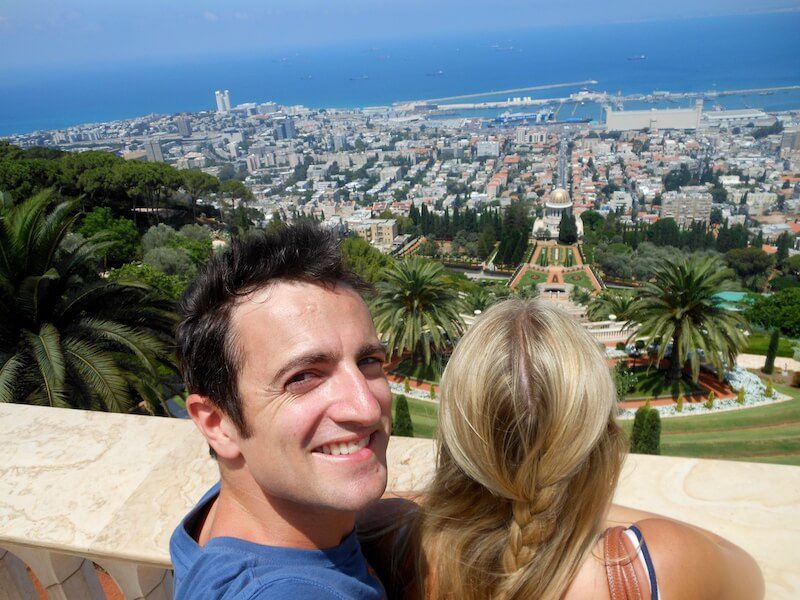 Haifa is the third-largest city in Israel. Whilst many tourists have never heard of it, Haifa was a prominent part of our Israel travel itinerary. A port city in the north, it has plenty to offer to visitors and I would absolutely recommend visiting if you get the chance. Here’s my complete guide to visiting Haifa.

To visit Haifa, the best airport to fly to is Ben Gurion (TLV). This is Israel’s main international airport located in Tel Aviv. Its Hebrew acronym is Natbag, which is how the airport is sometimes referred to. You can fly to Ben Gurion from many major cities across the globe: London, Paris, New York and more.

Upon landing in Ben Gurion, Haifa is a 1.5 hour (120km) drive away. There are official taxi stands outside the terminal. You can choose from a private taxi, or for a cheaper option go for a shared taxi which is more like a minivan.

If you are planning to visit a lot of different places during your trip to Israel, I would personally recommend hiring a car! We did a tour throughout the whole country in our car, which made for a brilliant holiday!

For an even cheaper way to travel to Haifa, opt for the train. It goes directly from Ben Gurion Airport to the city of Haifa, and takes just over an hour and a half.

Read also: Visiting Mitzpe Ramon: Everything you need to know

Haifa is also a cruise port. You may visit Haifa as part of a Mediterranean cruise. Companies such as Viking, Seabourn, Royal Caribbean and more. A lot of cruisers tend to take an organised excursion to Jerusalem or Bethlehem, but Haifa itself has so much to offer if you want to stick around.

Things to do in Haifa

There is a huge variety of things to do in Haifa. No matter what your age, interests or abilities, you are bound to find something that suits you. So, what can you do in Haifa? Read on to find out…

The National Maritime Museum is a popular choice for families. It tells the story of the people who travelled to Israel from Europe via boat, and also the beginnings of the Israeli Navy. The museum is really engaging and has air conditioning!

The Railway Museum is located at the Haifa East railroad station. Perfect for train lovers, it traces the history of Israeli rail travel going back to 1892.

Hermann Struck was a prominent 20th century artist, and his home in Israel has been turned into the Hermann Struck Museum. Alongside his and other print artists’ artwork, visitors can see some of Struck’s furniture, books and trinkets.

The Baha’i Gardens were the main reason that we chose to visit Haifa- they are iconic. There are 19 terraces and a gold-domed shrine in the centre, Shrine of the Bab, which contains the tomb of Siyyad Ali Muhammed. With birds singing, a stunning sea view and beautiful flowers, it’s a must-visit. You can go with a guide to see even more of the park.

Dado Beach is clean and spacious, as well as being the longest beach in Haifa. There is a public gym, lifeguards for safety and even a salt water ‘pool’ for children to swim in.

The Sculptures Garden, Gan Hapsalim, is a bit of a hidden treat. It has plenty of parking space, if you have hired a car, and is perfect for an urban hike. With plenty of sculptures and a view over Haifa, it provides a bit of quiet in such a bustling city.

Other things to see and do in Haifa

There is so much to do in the city. Visit the German Colony, see the Sammy Ofer Stadium, check out the cave of Elijah or walk down Yefe Nof Street to soak in the incredible views. You can visit the  Stella Maris Lighthouse and the Carmelite Monastery, or take a trip to Haifa Zoo!

Where to eat in Haifa

Ha Sandwichim shel Bracha (Bracha’s Sandwiches) is, as the name suggests, a sandwich shop. One of the cheapest places to eat in Haifa, they’re labelled as the best sandwiches in Haifa! The perfect lunch option in the city. Previous visitors suggest letting Bracha decide what you have on your sandwich, which is prepared freshly in front of you!

Hanamal 24 is a gourmet restaurant offering Mediterranean and European food. With a ‘room for two’ offer if you want a romantic meal and a hugely varied menu, it’s easy to see why so many people recommend this place if you’re looking for somewhere special.

Sangria Tapas Bar is the place to go if you’re after seafood in Haifa. With proper Spanish sangria and a huge choice on the menu, as well as a cosy atmosphere, everybody seems to love this restaurant.

Where to stay in Haifa

Whilst we didn’t stay overnight in Haifa as we opted to do a day tour, staying for more than one day would give you more time to truly experience and appreciate this city. Below are my recommendations for some of the best places to stay in Haifa.

The Haifa Bay View Hotel is only a 2 minute walk from the Baha’i Gardens. With bright and modern decor, sea views, WiFi, parking and great disabled access, this is a great choice. There is also a kosher Chinese restaurant at this hotel!

The Bay Club is an Atlas Boutique hotel. For something a bit more luxurious, this hotel has a stunning terrace and greenery as well as beautifully decorated rooms. Pets are welcome here, there is free WiFi and family rooms are available.

The 1926 Designed ApartHotel is a colourful choice. Excellently located a 5 minute walk from the port and only 550 yards away from the train station, this is the perfect choice no matter how you’re getting to the city. It’s also surrounded by cafés and pubs so if you’re into socialising, this is the hotel for you.

Port Inn is again 5 minutes walk from the port, and you can choose between dormitory rooms, private rooms and apartments depending on what you want. With a sun terrace, garden, air-conditioning, free WiFi and private parking, this is a great choice if you’re looking for somewhere fairly affordable to stay in Haifa.

For more accommodation options and to see what’s available on your travel dates, click on the map below.

So there’s your complete guide to visiting Haifa, Israel. It’s a beautiful city that has so much to offer no matter what you’re after!