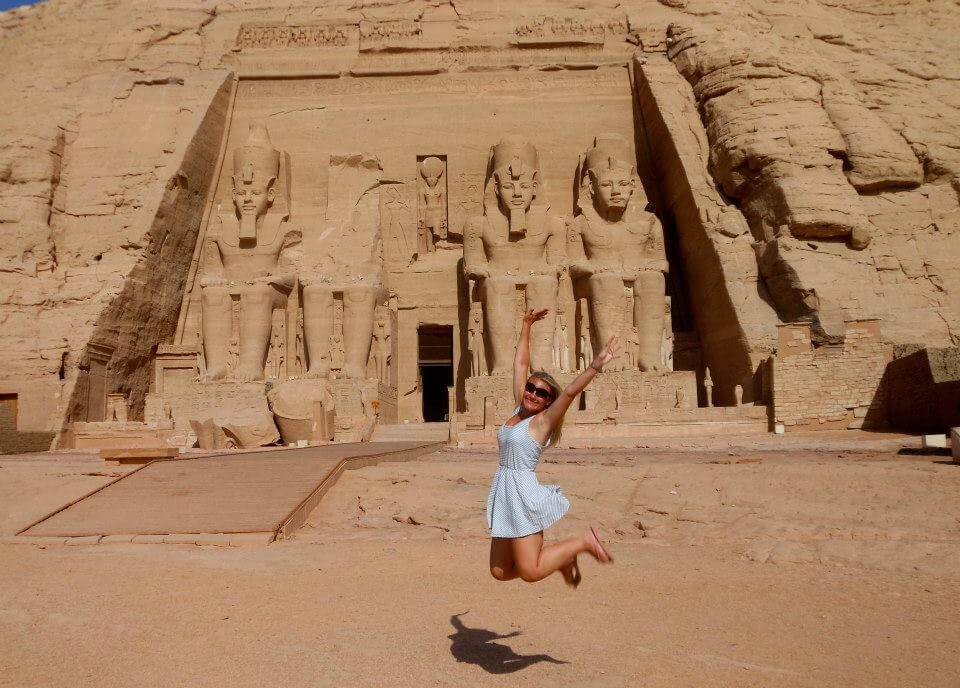 There are sooo many fascinating facts about Egypt- pyramids, sand dunes, tombs of mummies and so much more! Egypt holds a fascinating history on planet earth. The country is well known for myths, ancient civilizations, and most importantly, the Pyramids of Giza.

But this is not it to the land of legends — Egypt has many other stories and secrets to reveal. In this article, I will be unfolding 25 fascinating facts about Egypt. Keep on reading if you want to have a glimpse of some surprising facts about the country that were followed by the pharaohs and are still practiced in this time.

The first of my fascinating facts about Egypt is about the afterlife! Ancient Egyptians have been known to prepare themselves for the afterlife. They have ensured to not only get a luxurious lifestyle here but also in the life hereafter. So, turns out that ancient pharaohs strongly believed that they would get to live a life after they were dead.

And to remain intact just the way they were when alive, people used to mummify them along with their luxurious possessions.

Many of you might not be aware that Egypt has 7 UNESCO world heritage sites. So, when I told you that Egypt has a lot to offer other than the pyramids and mummies, I wasn’t actually kidding. That’s for real!

These 7 worth-visiting sites include Historic Cairo, Abu Mena, Saint Catherine, Abu Simbel, Memphis and Necropolis, Ancient Thebes, and Wadi Al-Hitan. So, make sure not to miss any of these unparalleled sites whenever you get to visit Egypt.

3. The Only Ancient Wonder In The World

Talking about seven wonders of the world and forgetting the only ancient wonder? That’s not going to happen because, factually, it is literally not possible. The Great Pyramid of Giza is one of the most intact ancient wonders in the world.

Located in the heart of Cairo, they are visible from almost all over the city. Almost every one of us has these pyramids on our bucket list, so make sure to tick them up by paying a visit over there.

4. Pyramids Were Built By Actual Labourers (not slaves!)

Another of the most fascinating facts about Egypt relates to the ancient labourers.

Remember the stories we used to hear about the Great Pyramids in school? Some of them were way too crazy, like the pyramids were actually built by enslaved people. Turns out that these were actually folklores, and real labourers were appointed to build these pyramids. However, we still don’t know who actually came up with this idea — it’s still a real mystery.

5. Hundreds Of Gods To Please

Now, if you have seen those unusual signs on the pyramids, you might be aware of the stories that these diagrams belong to Egyptian Gods. These ancient Egyptians literally had hundreds of Gods. And they had to please each of them; otherwise, it was believed that they would get into big-big trouble.

6. 95% Of Egyptians Reside Along River Nile

One of my favourite facts about Egypt is that most people live along one narrow strip of land.

From stories and pictures, anyone would think of Egypt as just a city full of sand dunes and nothing else. But there flows one of the longest rivers in Africa named River Nile, and around 95% of the Egyptian population resides there. This village, also known as Nile Valley, has a beautiful landscape and is nothing like the sandy ancient Egypt.

If we look closely, the scribbles on the pyramids tell us a lot about the ancient Egyptian civilization. One untold story was evident through several diagrams inside one of the pyramids. These diagrams evidently showed how pharaohs had a keen interest in playing board games, most probably chess or others.

Another one of the most interesting, untold facts about Egypt is that it’s actually the land of three different kinds of deserts. One is the Western Desert, the Eastern Desert, and the Great Sand Sea, which happens to be a part of the Sahara Desert. Also, there tends to be a unique desert known as the white desert just in the centre of Egypt.

9. Egypt Is Home To The World’s Largest Dam

Another one of the most riveting facts about Egypt is that it is the home to the world’s largest dam. Aswan High Dam spans across the Nile and separates Egypt from Sudan. Many of you might find this beneficial. However, it’s quite unfortunate to know that Sudan has had a huge water scarceness because of this dam.

10. Cleopatra Was a Greek

Even though Cleopatra remains the most pivotal figure in ancient Egypt, she still has a very interesting, rather shocking revelation about her identity. While she might have been born in Alexandria, she had no Egyptian blood. Instead, she was actually a descendant of Greek Macedonians! Fascinating!

11. Invention Of The First Calendar

This is one of the most surprising facts about Egypt! Have you ever thought about who would have come up with the calendar we use today? Ancient Egyptians were the first who invented this 12-month calendar. The ancient Egyptians had 30 days for each month.

Ultimately, this would make up 360 days and imbalance the yearly calendar. To make up for that, they used to celebrate a 5 days festival at the end of the year.

13. The Hieroglyphs Do Have Some Meaning

Ever wondered what is actually written inside the pyramids? These diagrams or you can say symbols, are known as hieroglyphs. Little to none is known about this language. This is sure that it’s an ancient language with about 700+ symbols.

You might have heard many facts about Egypt, but we are sure you would have never come across this one. Ancient Egyptians used to adore cats way too much. Even if they died, they would mummify them!

If you ever get a chance to visit Egypt, you will see how they adore street cats and how they believe that cats bring good luck.

Undoubtedly, this is one of the most interesting things about these pyramids and indeed one of the most fascinating facts about Egypt. Even under a blistering sun, when the temperature in Egypt remains 40 degrees Celsius and above, the pyramids will have a constant temperature of 20 degrees Celsius. I guess ancient Egyptians were smart enough to discover how to cool and cover themselves utilising various ancient techniques and concepts.

16. Men And Women Both Used To Do Makeup

Makeup wasn’t only reserved for women in the ancient Egyptian era. Men and women both would equally use makeup. However, it wasn’t used for beatification. Instead, they used it to protect their skin from damage and believed it would help them gain power.

Now, I believe all those black and red lines on pharaohs’ diagrams make sense, right?

Another crazy fact about Ancient Egyptians is that they don’t only worship animals- they also trained them to do many things. Some animals were literally trained to catch thieves, make beer, pick fruits, and last but not least, entertain their masters. I had never ever heard of that, have you?

18. Long-Lasting Civilization Of All

One of my favourite facts about Egypt is that the Ancient Egyptian civilisation actually lasted for more than 3000 years. It is considered one of the most successful civilisations until now. During this time, they made sure they performed remarkable accomplishments depicting the world around them.

19. Egypt Has A High Literacy Rate

The high literacy rate in Egypt, as compared to other countries is very impressive. Some improvements still need to be made to make the literacy rate equal among men and women, but overall, it’s remarkable how many people can read and write given the statistics in similar fairing countries.

20. Egypt Only Has Two Seasons

Among the least known fact about Egypt is that it only has two seasons. Like it’s just either summer or winter — nothing else. Summer is from May to October, while winter lasts from November to April…. and winter is a lot colder than most people expect!

21. Not Everyone In Ancient Times Was Mummified

22. Egyptian Pyramids Are Not The Biggest In The World

Although the Egyptian pyramids would seem huge and massive, they are still not the biggest in the world. However, this title belongs to the Pyramid of the Feathered Serpent in Mexico, which covers an area of 200 km square.

In contrast, the Pyramid of Giza only covers an area of around 21 km square. It means it’s almost 9 times less than the Pyramid in Mexico, but still, many people call it the world’s largest pyramid. Sounds really strange!

23. Pyramid Stones Are Heavier Than An Elephant

Each stone used in the Pyramid’s buildup would weigh approximately 2.5 tons. This is actually heavier than an average elephant in today’s time. Ever wondered how would labourers put up those heavy stones in the ancient times without modern machinery? Guess that remains a mystery until this date!

24. Secret Doors To The Pyramids

One of the most shocking facts about Egypt is that the Great Pyramid might have doors leading to a secret chamber. Recently two 20 cm wide tunnels were discovered that ended up at a stone door having copper handles. Egyptologists believe that there could be secret treasure inside of it. But they are still figuring it out, and I wonder how long it will take to unveil this whole mystery.

Many Egyptologists do not understand this fact. Still, they do claim that there are hidden passages, chambers, and shafts inside the Pyramid. In short, the Great Pyramid isn’t solid, and it has a lot of intricate passages underneath it.

Egypt has been full of surprises as its ancient civilization has much to unfold. Hopefully, I have provided you with some of the most surprising facts about Egypt in this article. Don’t forget to hook up on the spots if you ever get a chance to travel to Egypt!

Want to read some more interesting reads about the travel world? I have recommended some below: