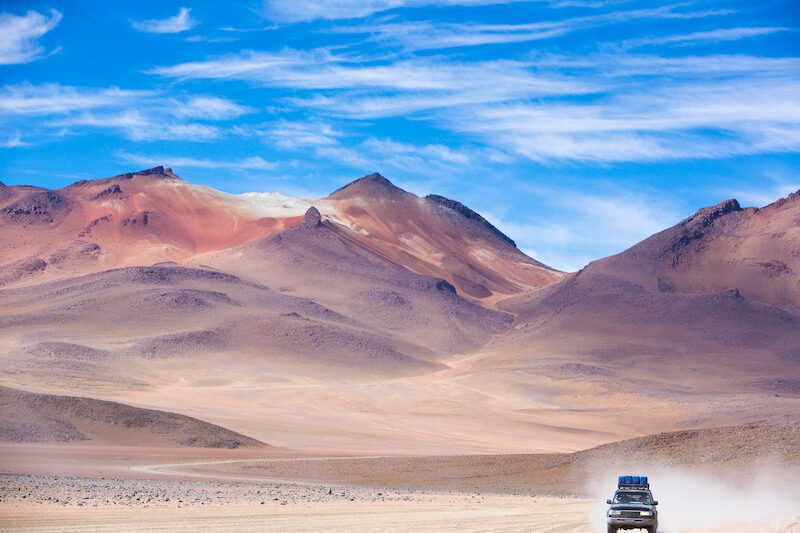 What comes to your mind when you think of deserts? Perhaps far-fetched land covered with sand? Or an uninhabited zero-man region? Or maybe a habitat of thorny plants capable of ripping someone off? Well, you’re right, but that’s just scratching the surface. In reality, there are numerous more untold secrets and facts about deserts that very few people know about.

If you’re a travel enthusiast and want to learn more about deserts, you’re at the right place. I’ll tell you twenty-five significant facts about deserts you probably didn’t know existed. Without any further ado, let’s begin.

Before moving forward to talk about the most fascinating facts about deserts, let me tell you about what makes a desert. The term ‘desert’ refers to an abandoned place, but in reality, it isn’t true (more on this later). Simply put, any region that receives less than 10 inches of rainfall annually is considered a desert. Yes, that’s right – it’s not always about being a sandy land.

#1 Deserts Take Up a Major Chunk of Earth

Did you know deserts occupy more than 1/5th of the planet’s total space? If calculated, it translates to a whopping 20.9 million square km. Here’s one more thing: deserts are found in almost every continent except Europe.

#2 Not all Deserts Have Sand

Here’s one of the exciting facts about deserts: only a mere 20% of the world’s total deserts have sand.

In fact, there are four different types of deserts, including:

#3 Deserts Are Scorching During Day and Cold At Night

Deserts have peculiar weather throughout the day. During the daytime, the scorching sun and the extremely high temperature make it unbearable for anyone to come out of their hut-like dwellings. However, the situation reverses during the night, when the weather is freezing cold.

But why does this happen? The simple answer is low humidity. Moreover, there is no blanket to cover the ground, which causes the temperature to rise during the day.

#4 Antarctica is the Largest Ice Desert

Antarctica is, in fact, a desert, covering almost 5,339,000 square miles – a land size similar to Russia.

Furthermore, it’s the only desert continent in the world where snow never evaporates. It’s also the highest desert since its elevation outstrips any other desert. Let’s not forget about the cold temperature of Antarctica, which averages around -49 degrees.

Another interesting fact about Antarctica is that it contains 90% of the earth’s fresh water. Do you know what’s more intriguing? It only rains less than 20 mm in Antarctica, and it still has packed ice sheets, which have trapped most of the planet’s freshwater.

#6 Arctic Desert: The Land of The Midnight Sun

The Arctic is the second largest cold desert covering an estimated 13,900,000 square km near the North Pole.But here’s what is interesting about the Arctic: the sun doesn’t set for nearly sixty days during the summers, and it keeps hovering over the Land.

Hence, it’s widely known as the “Land of the Midnight Sun.” Or maybe the Land that never sleeps isn’t it true as well?

Although the lifestyle can be extremely challenging, still, people live in deserts. As a matter of fact, about 1 billion people live with their livestock. However, it’s difficult to get water in the desert; hence, these people have difficulty adapting to the ecosystem.

They cannot grow crops or feed their livestock, making it challenging to survive.

#8 Desert Land is Growing Each Year

It isn’t good news, but almost 46000 square miles of the area is converted into desert annually. Desertification is a threat since it affects the livelihood of rural populations.

In China alone, about 1000 square miles of the area turn into desert, further intensifying indestructible and perhaps unavoidable dust storms.

But what’s the reason behind this? Simply, rapid urbanization and deforestation reduce the likelihood of rainfall and convert dry lands into deserts.

#9 Atacama: The Driest Desert Ever

Atacama desert is a unique region in Chile with no rainfall for 40 million years. Can you believe that?

Despite having no rainfall records, more than 1 million people live in the Atacama desert, surviving on water from aquifers or snow melts. But still, with no rainfall for ages, how much water could inhabitants possibly extract?

Furthermore, the significance of the Atacama desert is that it’s home to the largest ground telescope, ALMA.

#10 Sahara Desert: The Test Against Sun

Let’s talk about the largest and tourist-favourite desert in the Middle East: The Sahara.

It’s considered the hottest desert since the temperature can go up to 122 degrees. Moreover, it can also be one of the coldest deserts during the night, when the temperature reaches -4 degrees. The Sahara desert spans nine countries, including most of the UAE, Saudi Arabia, Yemen, and Oman. Moreover, it has giant dunes, reaching a height of almost 400 ft. (larger than the Statue of Liberty)

Let’s not forget about the marathon competition held in Sahara – des Sables – a six-days 156 miles race through the desert. Here’s another interesting thing about Sahara: experts have noted that the desert is turning greener from the edges due to a favorable climate change.

Plants need water and sunlight to thrive. Although sunlight is abundant in deserts, water can be seriously scarce. Fortunately, the desert plant has miraculous adaptations that let them store water in the leaves.

Their roots are long enough to reach the deep ends of the soil to extract any moisture for survival.

Consider a cacti plant: once it stores water, it can thrive for as long as 100 years. Isn’t that surprising?

Indeed, deserts can have numerous exotic species of plants, mammals, and reptiles. The Arctic desert alone has over 700 plants such as shrubs and lichens and around 120 animal species, including polar bears, arctic fox, walruses, and caribou.

Usually, deserts are a place for nocturnal animals that hunt at night, including rattlesnakes, rodents, bats, and bobcats. Furthermore, the tortoise is a resilient desert animal since it can survive without water for a year and tolerate temperatures of more than 50 degrees.

Similarly, camels are often found in deserts and can go for weeks without water. Plus, their humps lock in the heat that keeps them warm during the nights.

#13 A Rich Source of Clean Energy

Deserts are a goldmine for solar power generation since you can find plenty of sunlight and silicon. Furthermore, the earth’s deserts receive more power from the sun in six hours than humans can consume during a year.

The good news is that developments are underway, and the Mojave Solar Project Power Generation is expected to generate 3600 megawatts of electricity in nearby towns.

It’s a small desert (1500 km) in Israel that is a haven for historical sites of nature reserves, monasteries, and panoramas. Moreover, farming has been carried out in the desert since the 7th Century.

Let’s talk about one of the miraculous facts about deserts.

The Sonoran desert is a unique place famous for its vast saguaro cactus plants that can grow up to 12 tall in the wild. But how is that possible? Well, Sonoran is the wettest desert with an average precipitation of about 20 inches.

One of the most interesting record-holder facts about deserts is that a person, Reza Parkravan, has crossed the entire Saharan desert on his bike within 13 days and 5 hours. Starting from Algeria, this man rode for 1084 miles and ended his journey in Sudan.

#17 The Significance of the Gobi Desert

However, the desert is expanding at a staggering rate, mainly due to climate change and poor cultivation practices.

Here’s one of the most thought-provoking facts about Deserts: experts suggest that Mars is the only planet where a desert ecosystem has been identified.

The surface pictures show that the soil varnish resembles earth’s deserts, and there are dunes in the form of half moons.

The oldest Namib desert is found in Namibia, covering almost 930,000 square km. It covers most of Botswana, Namibia, and Southern Africa.

The US is only home to four deserts, including:

Ever imagined what would happen if you were stranded in a desert? You can extend your life with several techniques, but they won’t help forever. In fact, over 8 per thousand people die in the Sub-Saharan deserts.

Life is difficult, but if you’re lost in a desert, here are the techniques you can apply:

Like any other habitat, deserts are also home to some dangerous toxic animals, including:

#24 Arabs and The Deserts

The Islamic Caliphate during the 600-700 AD was the first organized army to conquer Persian and Roman forces in deserts. These Arab armies used camels and were familiar with back routes that helped them win hundreds of wars.

I’ll end my list of facts about deserts with a rather alarming one. Nearly 50 years ago, a new desert surfaced in Afghanistan known as Aralkum, measuring 45,000 square km. However, the desertification occurred primarily due to man-made toxic pesticides that erode the agricultural capability of the Land.

Summing Up the 25 Facts About Deserts!

After reviewing my list of 25 facts about deserts, you must know that deserts have much more to offer than sandy dunes and thorny bushes. So, are you planning a road trip to the massive Sahara desert? If yes, watch out for the hot, humid temperature and the cold nights.

If you think I’ve missed any crucial facts about deserts, feel free to mention it below. Lastly, if you liked reading my list of desert facts, here are some more tourists and informative posts. Give them a read.