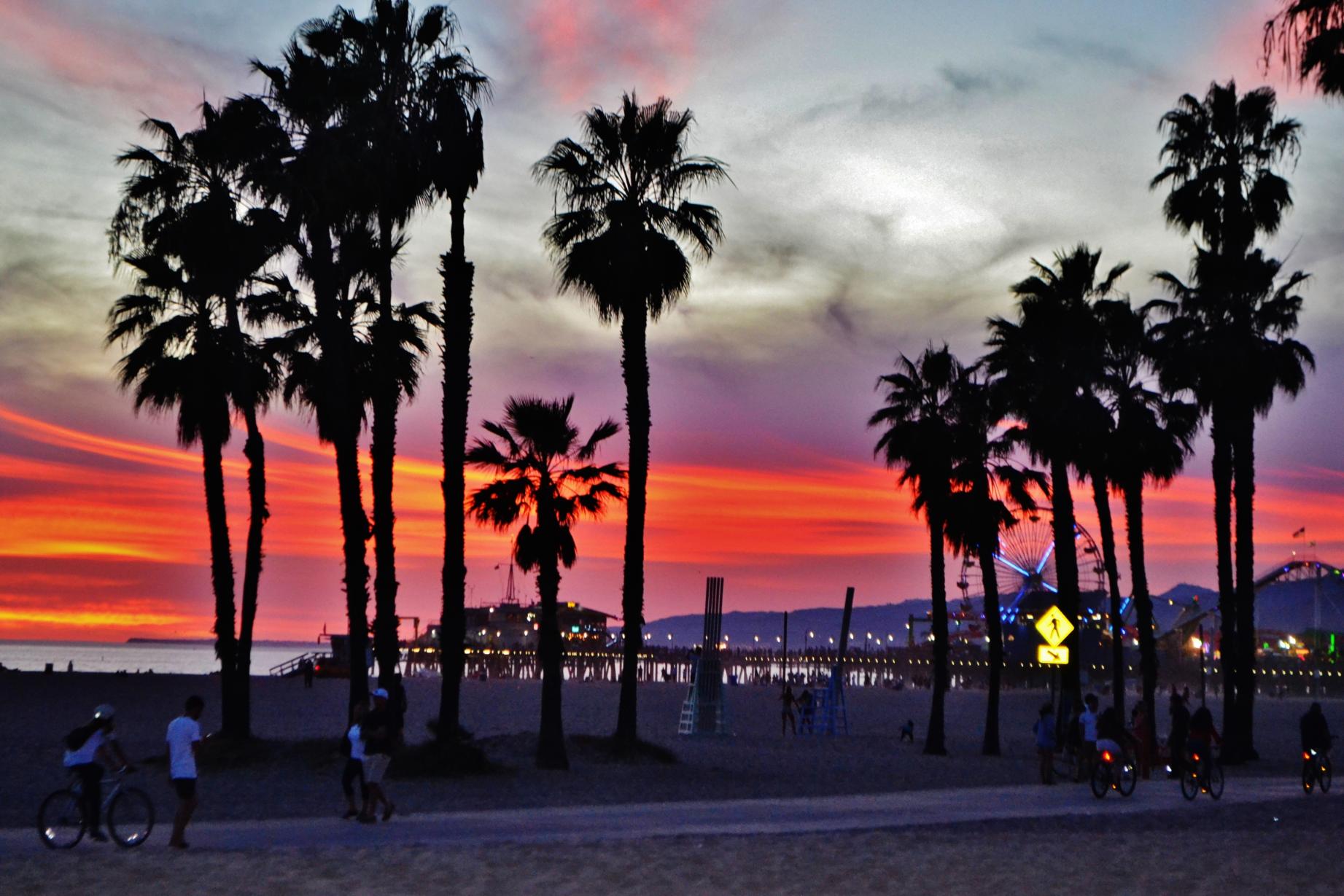 The first of my fascinating facts about California is science-related.

Isaac Newton’s gravitational law was in question when some surveyors uncovered The Mystery Spot. This is a gravitational anomaly located in the redwood forests just outside of Santa Cruz.

The Mystery Spot was discovered in 1939 by a group of surveyors and was then opened to the public in 1940. It is a circular area of around 46 meters in diameter within which your perceptions of the laws of physics and gravity are questioned! Nobody really knows why, but some people believe it is the result of aliens and others think it is carbon dioxide permeating from the earth, a magma vortex, a hole in the ozone layer or biocosmic radiation. The puzzling variations of gravity, perspective, and height are amazing- making this one the most fascinating facts about California!

2.     California has The World’s Largest Tree

One of the most fascinating facts about California is that it owns a massive collection of the oldest and largest trees. A giant tree – General Sherman is appraised for its age as about 2700 years old!

3.     California Weighing The Scale Of Life Within The Hottest Valley

The latest 2022 estimated temperature of Death Valley ranges around 120 – 122 Fahrenheit, but still, the Valley experiences life within its surroundings.

There is lots to see here including the beauty of desert windflower, Badwater basin, the Ubehebe Crater, Artist’s Palette, and much more- but remember to bring a fan and some water!

4.     California Possesses The Power Of Innovation

From the Internet to games, food, and cartoons to many other things, California initiated and brought imagination to reality. One of the most interesting facts about California is that the state led the world towards the world of the Internet back in 1969, created a skateboard market, defined the beauty of Barbie dolls, and rocked the world with arcade games- all examples of innovation at its finest!

Another fact about California is that the state holds two-thirds of avocado production.

In addition to this, California is the only state in the USA that introduces multiple food categories in avocados, including avocado toast, avocado burgers, avocado salads, guacamole, and much more. I am a big avocado fan- what about you?

6.     California Is Home to Sunbeams

Natives and tourists named California a sunny place – and they’re not wrong. On average, California has 300 days of full sun a year. That means that in California it is rare to have cloudy or partially cloudy days.

Along with the nine national parks, California has many other roadside activities such as Cabazon Dinosaurs, Venice Canals, and much more.

8.     The Charisma Of Yosemite National Park In California

The Yosemite National Park is a pristine area in California’s Sierra Nevada mountains. The park is home to various natural wonders, including Yosemite Valley, Half Dome, El Capitan, and more.

Travellers can explore the park by hiking, biking, driving, or flying. The garden also has several hotels and campgrounds, making it the perfect place to spend a day.

9.   California Is Home To Wine Production In America

Another of my favourite facts about California is that the state yields more than 90% of American wine and influences the whole world with its more than 600 winery categories! California’s wine industry generated $43.6 billion in revenue in 2019- that’s a pretty significant amount!

10. California Leads The Way With Roundabouts

California is the only state in the USA with more than 15,000 roundabouts – a roundabout is a circular intersection where traffic flows around a central island. Roundabouts are safer and sounder as compared to other regular corners, meaning that California is a safer place to drive than other parts of the USA.

California didn’t have any theme parks before Disneyland. Walt Disney took the first initiative in Anaheim in 1955 and spent $17 million on a theme park. Now, it’s the most visited park in California.

Another awe-inspiring fact about California is that the state possesses Lake Tahoe. The amazing lake is 6,225 feet wide and 1,645 feet. deep and is full of marine wildlife. It is a beautiful blue colour that will certainly help you to get some draw-dropping Insta-worthy shots!

The Monterey Bay Aquarium is a non-profit tourist attraction. It has more than 80,000 marine species, including plants and animals. The whole site is covered with glass and has 2 million gallons of seawater from Monterey Bay.

14. California Is Home To Watermelon Snow

Another one of the most interesting facts about California is the bravura watermelon snow. Watermelon snow, also referred to as snow algae, pink snow, red snow, or blood snow, is caused by Chlamydomonas nivalis– a species of green algae which contains a secondary red carotenoid pigment (astaxanthin) in addition to chlorophyll. The nickname “watermelon snow” comes not only from the pink color, but it is said to smell slightly sweet, a bit like watermelon.

In the summer months, watermelon snow puts a pink blanket over the Sierra Nevada, which is stunning to look at.

California is the only state in the USA that gives you everything in one place. You can even meet your dream celebrity at some fancy restaurant or while shopping in a mall.

It also has the world’s famous street – The Hollywood Walk of Fame is ferreted along Hollywood Boulevard.

California has many museums to showcase its history, and the Santa Cruz lighthouse is one of them.

The lighthouse was constructed for the sailors’ benefit and to assist marine life, but the project stopped due to the Civil War. Many years later, the project restarted and is now open to the public.

17.  California Adventure At The Trees Of Mystery

The Trees of Mystery, which exhibit the beauties of the North Coast, are tucked away in the core of the Redwood National and State Parks.

Here you can explore Paul Bunyan and the Trees of Mystery, travel into the woods in an adorned gondola, tour across the approximately one-mile-long wilderness, and take in the region’s ancient glory.

Another one of the most surprising facts about California is that the state is fully covered with redwood trees, which gives an enchanted look. In 1937, the government announced the “redwood tree” as the California state tree.

19. The Shine Of California – Watts Towers

One of the most beautiful facts about California is that the state has been the birthplace of many talents, and Sabato “Sam” Rodia is one of them. He solely constructed the Watts Tower by himself, and it took him thirty-four years to complete it.

20. California Is Home To Native Americans

The Native Americans used to live in California more so than other parts of America, including Maida, Hupa, and Pomo. Many of the Native American speakers also reside in Arizona and New Mexico.

Mount Whitney holds the ground with a length of 14,505 feet. It is situated in the east of California, outside Sierra Nevada Mountains. It is located in the national park, Sequoia. It is also another famous tourist attraction in California.

California’s leading export is almonds. The Central Valley is acknowledged as the almond capital of the world, where the majority of the state’s almonds are harvested. As a big nut fan, this is one of my favourite facts about California!

Another fact about California is that the state appears modern on the Internet, but in reality, people like to stick with their old traditions and schools of thought.

Despite the rise of contemporary automobiles, San Francisco still fills their roads with cable cars, making it unique and authentic!

The Channel Islands National Park has five connected islands. The park grants multiple options to its visitors, including going for a dip in the ocean, climbing mountains, camping, or scuba diving.

25. The Rise Of Silicon Valley In California

Silicon Valley – the name itself holds a dominant stature. Silicon Valley is home to the most innovative technology, including eBay, Google, PayPal, Adobe, Calyx Software, Western Digital, and more. The Valley is found in San Francisco, CA, USA.

James W. Marshall encountered the gold at Sutter’s Mill in 1848. After the discovery, California experienced a sudden increase in visitors. Most tourists came from China and Australia.

Due to the gold rush in California, the sparkled gold mines took the state to the next level. Years later, the state was entitled to a new nickname – The Golden State.

In 1975, the state declared the California Gray Whale as the state Marine mammal. It weighs around 30 and 40 tons and is 40 to 50 feet long. The whale moves along the coastline in a southerly direction in winter and comes back before summer. Some whales cover a distance of about 12,000 kilometres.

30.  California – Land Of Milk And Honey

Central Valley, California, has the most agricultural land and grants a vast profit to the USA with its export. Due to its enormous food production, it is also called the Land of Milk and Honey.

Another one of the most interesting facts about California is that the state has more heat than the other states.

Sonoma County beats the world in the geothermal field. It also has a thrilling ancient history of about 12,000 years old. Research has shown that natives used it for rehabilitating intentions and steam baths.

32.  State That Has A Country Of Dog Lovers

A survey has shown that San Francisco, California, has more dogs in a park than children. This shows that people in California love to adopt dogs!

33. Californians Introduced The Fashion Of Jeans

Along with the innovation of technology, Californians also rocked the fashion industry. In 1873, Levi Strauss and Jacob Davis introduced blue jeans. After the creations, people redesigned their wardrobes and stacked up on jeans.

From sandstone to quartz, to granite, to many other minerals and rocks, California has a wide variety of rock formations, including Moro Rock Trail At Sequoia And Kings Canyon Parks,

Morro Rock at Morro Bay and red rock at Canyon state parks are more options to visit and climb.

The Glacier Point at Yosemite National Park offers the best sight of the beauty of Nevada Fall, Vernal Fall, Cloud’s Rest, and much more. The point has the edge and shows much untouched beauty. Some tourists believe that the place holds bewitching power too!

Whether it is film-making, technological innovations, or even its agricultural triumph, California has much more to offer its natives, visitors, and tourists. Along with its enchanting beauty, people also find California fit for career establishment.