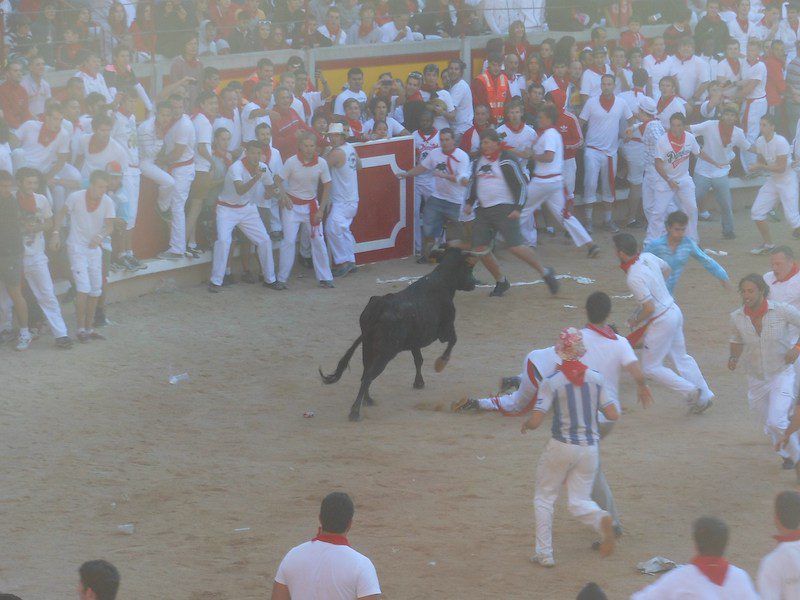 There are many facts about bullfighting that will shock you. From the fascinating history of bullfighting, through the the ethical implications of this ‘sport’, bullfighting is certainly an interesting thing to research.

Bullfighting has been a prominent activity in tourism throughout history. But why has it historically been so popular? Should we partake in bullfighting in the 21st century? And if we are considering supporting this industry, what facts about bullfighting do we need to know? All is revealed in this article…

Facts about bullfighting that will surprise and shock you

Are interested in attending a bullfight? Or perhaps you just want to learn a bit more about bullfighting? Either way, it’s great that you are here! Because today I am going to tell you about the 12 most shocking facts that I know about bullfighting…

#1 These bulls are bred to fight

My fish interesting fact about bullfighting I that you won’t find just any old breed of bull used in bullfighting. There is a specific breed called the Toro Bravo, bred for their aggressiveness. They will (unlike their domestic counterparts) always charge at a target.

This means that you shouldn’t be afraid of the ordinary bulls you might come across on farm land – they are unlikely to charge at you or hurt you, as they are not bred for fighting like the Toro Bravo bulls are.

Experts in the field have traced these bulls back to the Iberian bulls of ancient Rome. They were used in arena games in amphitheatres like the Colosseum!

#2 The biggest bullring isn’t in Spain

While bullfighting is something we typically associate with the sunny European country of Spain (home of sangria and tortilla), the biggest bullring is actually in North America. You’ll find it in Mexico City, Mexico. It is called the Plaza de Toros Mexico.

The bullring here sits 41,262 spectators and is also used for boxing matches.

For example, the famous third bout between Julio César Chávez and Frankie Randall was hosted here!

Opened in February 1946, the Plaza replaced the ancient bulling (Toreo de la Condesa) which was located in the Condesa neighbourhood. The new stadium was built to accommodate the growing population of Mexico City.

#3 Spain’s biggest bullring is in Madrid

This might not be one of the most shocking bullfighting facts, given that Madrid is the country’s capital, but it’s worth mentioning nevertheless.

Las Ventas is home to a bullfighting museum where you can learn about the history of bullfighting – and you can do a tour of the building too.

Markets, theatre shows and more are hosted here too!

#4 Every bullfight starts in Madrid

Not literally every bullfight, of course, but every novice bullfighter in Spain must kill their first bull at the aforementioned Las Ventas in the Spanish capital city of Madrid. This gives them the chance to show off their skills in the ring.

After this, matadors can go on to fight at bullfighting rings across the country.

#5 It is not really considered a sport in Spain

While bullfighting is considered a sport to many, the Spanish see it as a cultural event. It is a huge part of Spanish history. They do not see it as competitive; rather, highly ritualistic. It is for this reason that the bull is sacrificed with a sword to the heart rather than any other body part.

There are, of course, rules and guidelines as well as various tactics and techniques when it comes to bullfighting, but the Spaniards still don’t see it is as a sport in the same way their view, for example, football or tennis.

#6 Bullfighting goes back to the ancient times

Far from being a new phenomenon, bullfighting has been around for thousands of years and the history of bullfighting is actually very interesting.

There is a wall painting in Knossos, Crete, which dates back to 2000 BC and depicts male and female acrobats fighting a bull. We know that the ancient Romans used bulls in their gladiatorial battles at arenas across the empire, too.

Later, the so-called Moors in Spain redefined bullfighting. They turned it into an event, something that took place on feast days and would be watched by many. This was during the middle ages.

So as you can see, there is a long history when it comes to shocking bullfighting facts…

#7 Modern-day bullfighting was pioneered in the 1700s

It was a man called Francisco Romero (1700-1763) who introduced Spain to bullfighting as we know it today. Bullfighting already existed, as per the previous shocking bullfighting fact, but it was Romero who paved the way for its modernity.

As the stories go, he was pretty much the founding father of bullfighting. It was early on in his life and career that he asked for permission to kill a bull himself at the end of a fight – this hadn’t been done before.

Later that day he provoked the bull a few times with a linen, then killed it with his sword. While linens may have been used previously (who’s to say), it was Romero that popularised this bullfighting prop and made it essential to the sport.

He went on to do this again at other bullfighting rings. This made him the bullfighter: the first (professional) matador, full of authenticity. He was also the one to introduce death by sword to bullfighting.

#8 Not all bulls are killed in the ring

This is one of the nicest shocking facts about bullfighting. While many bulls do sadly die in the ring, as is the nature of the sport, not all do. It is up to the crowd to decide…

If a bull is thought to have displayed exemplary behaviour and high levels of bravery in the ring, they can be pardoned – otherwise known as indultado. The crowd will display white handkerchiefs in order to try and convince the president of the bullring to let this bull live.

This is rare, but it means the bull is allowed to go home to ranch where it was raised. Here it will live out the rest of its life in peace!

#9 Some areas of Spain have banned bullfighting

Bullfighting is, naturally, quite a controversial sport and many question whether it is ethical.

Some areas of Spain have gone so far as to ban it completely. It is banned in the Canary Islands, as of 1991, and Catalonia banned the sport in 2012. However, the Spanish government actually overturned this ban in 2016. The constitutional court said that the Catalan ban was an unconstitutional prohibition of “Spanish cultural heritage”. Several cities in the area have declared themselves as anti-bullfighting cities, though, including the capital Barcelona.

Mallorca (Majorca), one of the Balearic Islands, adopted a law in 2017 that prohibited the killing of a bull during a fight. However, this law was also said to be partially unconstitutional by the Spanish Constitutional Court in 2018. The judges ruled that the death of the bull was part of the essence of a corrida.

#10 There are bullfighting schools – for children

When it comes to the most shocking facts about bullfighting, this one is up there.

Across Spain there are 15 bullfighting schools. They teach would-be matadors from as young as 14, practicing on fake bulls and then bull calves.

The world media went wild over this in 2019, when it came to light that 24 baby bulls had been massacred at a bullfighting school in Colmenar Viejo. Celebrities like Lewis Hamilton spoke out about this, and petitions went round to have these bullfighting schools shut down.

However, the conservative Spanish government are in favour of bullfighting. They even want to make it an optional part of the state school curriculum.

Annually, around 250,000 bulls are killed in bullfighting.

This is a major reason as to why the sport is so controversial – any sport that involves the injury or death of an animal is a topic that is regularly up for debate.

Sports involving animals are seen as exploitative, as the animal cannot consent but can feel the fear, exhaustion, stress and pain that comes alongside being used for human entertainment in a brutal way. Many say that it is an abuse of power, as humans have a position of responsibility towards all nature – including animals.

One of the most shocking facts about bullfighting is that the sport is actually practised in 14 different countries.

Many associate bullfighting with Spain and Spain alone, but there are thirteen other countries in which you’d be able to attend some form of bullfight should you want to. These (including Spain) are:

The laws and rules are different in each country, meaning the sport differs slightly from place to place.

For example, in their 2011 referendum, Ecuador voted to ban the public killing of the bulls. This means that at the end of a bullfight, they are taken ‘backstage’ to be killed instead of being killed as part of the traditional corrida.

In Mexico, bullfighting is banned in four states (Sonora, Guerrero, Coahuila and Quintana Roo), but is legal throughout the rest of the country.

Meanwhile, bullfighting is protected by many of these countries constitutions. It is said to be a tradition, and that banning it would be wrong. It is particularly favoured by right-wing governments and their supporters.