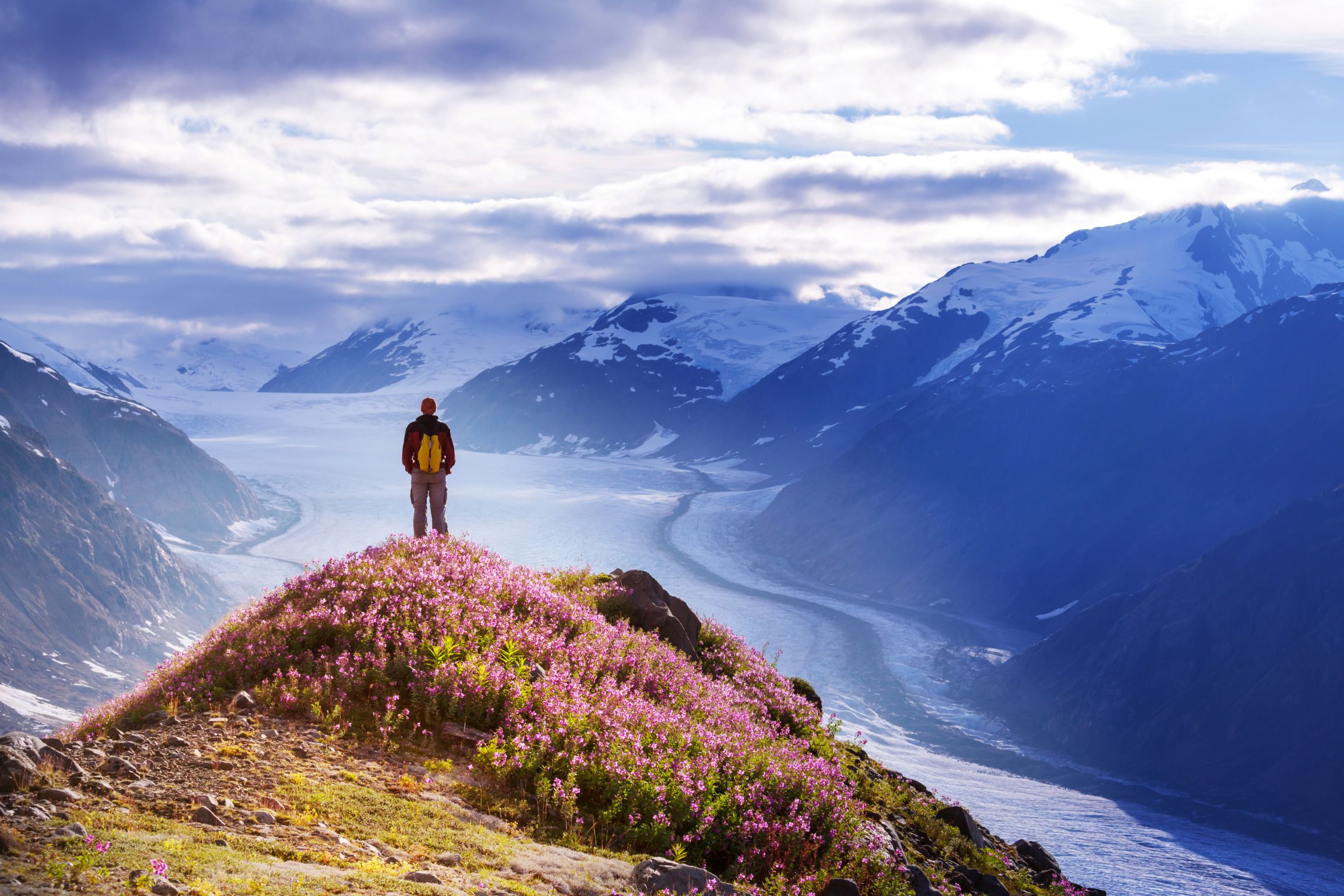 Alaska is one of the remarkable places for a vacation. Ask why? The soothing lakes, extensive recreational forests, and high mountain peaks make it an irresistible place to explore. Oh, and I’m just getting started; there are more interesting facts about Alaska – that can spark anyone’s interest.

Without any further ado, let’s take you on an adventurous ride, where I’ll outline 35 facts about Alaska.

Best Facts About Alaska No One Wants You to Know

#1 Largest State in the US

Although you may find it tiny on the map, Alaska is huge, covering almost 600,000 square miles of land. Hence, it’s no wonder Alaska is larger than twenty-two small states in the US combined.

Consider this: 12 New York State and 407 Rhode Islands can easily fit in Alaska. Moreover, this large State is further divided into six sub-states, which include:

If it was an independent country, it could have been the 17th largest in the world.

Here is one of the most striking facts about Alaska: It’s home to almost 17 tall peaks throughout North America.

There are a total of 20 tall mountains in North America, and 17 are found in Alaska. That’s not it! Even the tallest peak, 20320 feet above sea level, to be exact, is located in Denali, Alaska.

State of the Mountains, isn’t it?

Capital cities are usually crowded and have vast importance within a State. But things are different in Alaska. Juneau, Alaska’s capital, is, in fact, not as famous and crowded as other cities within the State.

Furthermore, the surrounding terrain creates a barricade, and therefore, there are no roads that lead to Juneau, leaving it accessible only by air travel.

One of the dangerous facts about Alaska is that it’s the most seismically active State. Furthermore, over 20,000 earthquakes occur annually, and in the last five years, 31 earthquakes with a magnitude of 6 or more have been experienced in Alaska.

Scary, right? Here’s one more most horrifying fact: out of the eight deadly earthquakes in the world, three have occurred in Alaska.

But the good part is these disasters occur in unpopulated areas, and residents don’t experience the aftermath.

One of the exciting facts about Alaska that makes it an attraction for visitors is that the two most extensive forests of the nation belong to Alaska, i.e., Tongass and Chagas.

Tongass is spread over 16.8 million acres and is excellent for sightseeing since you can spot exotic rare bald eagles, sea otters, seals, mountain goats, foxes, and sea lions. If you’re an animal lover, Tongass forest has to be on your wishlist.

Similarly, Chagas is spread over 4.8 million acres, and its main attraction is the beautiful rivers capable of refreshing souls. Alaska also has the largest concentration of bald eagles across the US.

Again, an interesting fact for animal lovers. Kodiak is a subspecies of brown bears, and you can find them strolling around Kodiak Island (yes, named after the island).

Do you know what makes them unique? These bears can be over ten feet tall when standing and about five feet when on all four legs. Not to forget, they can weigh over a whopping 1400 pounds. Massive, aren’t they?

#7 Dog Mushing is the National Sport

It may come as a surprise, but dog mushing is a big thing in Alaska. In fact, there’s an annual competition where twenty dogs travel over 600 miles to deliver medicine.

But how did dog mushing start in Alaska? Well, it was once a primary mode of transportation in Alaska, and slowly, it was considered a sport.

Alaska State Fair is an event where farmers show off their large veggies and compete in competitions. For example, Scott Robs from Alaska won a contest for presenting his 138 pounds of cabbage in 2012.

Due to constant exposure to sunlight for even 20 hours in a day, giant vegetables grow in the region. Hence, it’s common to find vegetables of that size in Alaska

#9 The majority of Alaskans are Men.

Let’s talk a little about some demographic facts about Alaska. The State has the highest men-to-women ratio (approximately 52% men) in the US. Put simply; there are 107 men for every 100 women. Quite an imbalance, isn’t it?

Although Alaska is the largest State in the US, it’s sparsely populated. It is so sparse that one person occupies one square mile.

Here’s one fact that may give you goosebumps. Barrow, one of the northern cities in Alaska, is a peculiar place – a city with both the longest and shortest amount of daylight. When the sun rises during May, it may not set for nearly three months!

And once the sun sets after three months, it may not rise for nearly two months, meaning a complete blackout for 60 straight days. No wonders why Alaska is also known as the Land of the Midnight Sun.

Yes, dog mushing is the national sport. But Alaska is also famous for its largest outhouse race in Anchorage city. Plenty of participants flock to Anchorage to build their outhouses and participate in this thrilling competition.

Here’s one of the mouth-watering facts about Alaska for foodies. If you’ve come to Denali, you cannot leave it without trying “the Denali Mac” – an alternative to Mcdonald’s Big Mac. The burger consists of secret sauces and patties that mount the total calories up to 840.

Seward’s Folly was initially coined to ridicule the deal between Russia and America. Not many people know, but Russia sold Alaska to America for over $7.2 million. There’s even a celebration day in Alaska on 30th March to commemorate the sale.

One of the unusual facts about Alaska relates to the gravity hills in Anchorage. In Upper Huffman Road, the gravity laws seem non-existent. Even a neutral car at the bottom of the hill moves up instead of speeding down.

A Danish Explorer, Vitus Jonassen Bering, initially explored Alaska during a journey from Siberia in 1741. Soon, Russian hunters flocked to the State, and the first colony inhabited Kodiak island in 1784.

You might have heard about the arts and mummies museum, but hammers, really? Yes, you can view fascinating collections of handle machinery, hammers, and tenderizers at a specific hammer museum in Alaska.

Alaska has the largest population of gray wolves – the major tourism component for the State. Currently, you can find almost 8000-11000 gray wolves across Alaska.

#19 Government Pays to Live in Alaska

Here’s an interesting fact that will make it irresistible for you to avoid settling in Alaska. Yes, you get paid to live there.

An Alaska permanent fund pays each citizen an annual specific amount at the end of the year to live in the State.

#20 The Story of Alaska’s Flag

Alaska’s flag was made by a 13-year-old boy, Benny Benson, in 1926. The blue background represents Alaska’s sky, while the eight stars represent the Dipper Constellation and the North Star.

#21 Mooses are Spread Across Anchorage

If you’re stuck in traffic in Anchorage, chances are that a moose is blocking your way. Yes, according to the city officials, there are over 1500 Mooses in Alaska that roam around the city and often venture on roads.

Some animals, including moose, bears, or caribou, will be considered State’s property if they are killed by a car. After they are killed in an accident, volunteers may butcher them and distribute the meat to charity organisations.

#23 A Town for Christmas

The Fairbanks suburb in Alaska is known as a specific Christmas town. Thousands of letters addressed to Santa are sent to the ZIP code each year, and the famous Christmas shop is open all year round.

#24 WW2: The Only Battle on American Soil

In 1943, the only battle that took place on American soil was in Alaska, i.e., the Battle of Attu. The Americans and Canadians joined forces to defend against Japanese troops on Alaska’s coastline.

There are over 10,000 plus active pilots in Alaska. Moreover, Alaska has four times the number of airports per square mile. But why? It’s because numerous places in Alaska are accessible only by water or air; hence, airports are essential.

#26 Seafood is a Big Industry

Seafood is the economic foundation of the State, which employs 15% of the rural community. Furthermore, Alaska has the most commercial fisheries in the US, and plenty of exotic species such as crab, cod, salmon, and shrimp are harvested in Alaska.

If you want to feel lost in nature for a moment, this fact will encourage you to visit Alaska. Northern lights (aurora borealis) are spotted nearly 243 times annually in Fairbanks, Alaska. Oh, and let’s not forget it’s a sight you can’t afford to miss.

Alaska is the perfect tourist spot. After all, it’s home to eight beautiful national parks, including:

#29 A Big Chunk of Alaska’s Land is Water

Here are another scariest facts about Alaska: it’s a volcano land. But don’t fret; only 1-2 eruptions have occurred since 1900. But yes, it’s a fact that Alaska has over 100s of volcanic fields and hot lava-bursting volcanoes.

#31 The majority of US’s Glaciers are in Alaska

Some portions of Alaska (around 3%) consist of ice-solid glaciers. Most of the US glaciers are found in Alaska. What’s more? Even the biggest glacier in the State, the Matanuska glacier, is also found in Alaska.

It comes as no surprise. Since 14.2% of Alaska is water, the State has plenty of rivers and lakes. The State has over 3000 rivers and over 3 million soothing lakes. Moreover, it’s even home to lake Iliamna – a 77 miles long lake as long as Connecticut.

One of the record-breaking facts about Alaska is that it has a 34000 miles long coastline connecting three different seas, including the Arctic, Pacific, and Bering sea. If I were to compare, the second largest coastline is 8000 miles long in Florida, i.e., merely 25% of what Alaska has.

#34 Fairbanks Has The Lowest Temperature

It can get freezing in Fairlands. So if you are about to take a trip, layer yourself with plenty of warm clothes. Usually, the average high temperature in January is 1 degree, while the average low is -18 degrees.

Now I’ll close my list of 35 facts about Alaska with a spooky one. The auditorium of the University of Alaska’s Anchorage campus is said to be haunted, as per plenty of tales and reports. Would you be willing to hang out at the auditorium to confirm this?

From visiting the magnificent rivers to trekking onto the mountain peaks while sightseeing exotic animals, Alaska is a great place to visit. So, get your gear ready to explore Alaska’s beautiful sights. If you think I’ve missed any facts about Alaska, feel free to add your facts about Alaska below.

Oh, and if you have liked my list of 35 facts about Alaska, give a read to the following exciting blog posts that reveal hidden tourist facts.