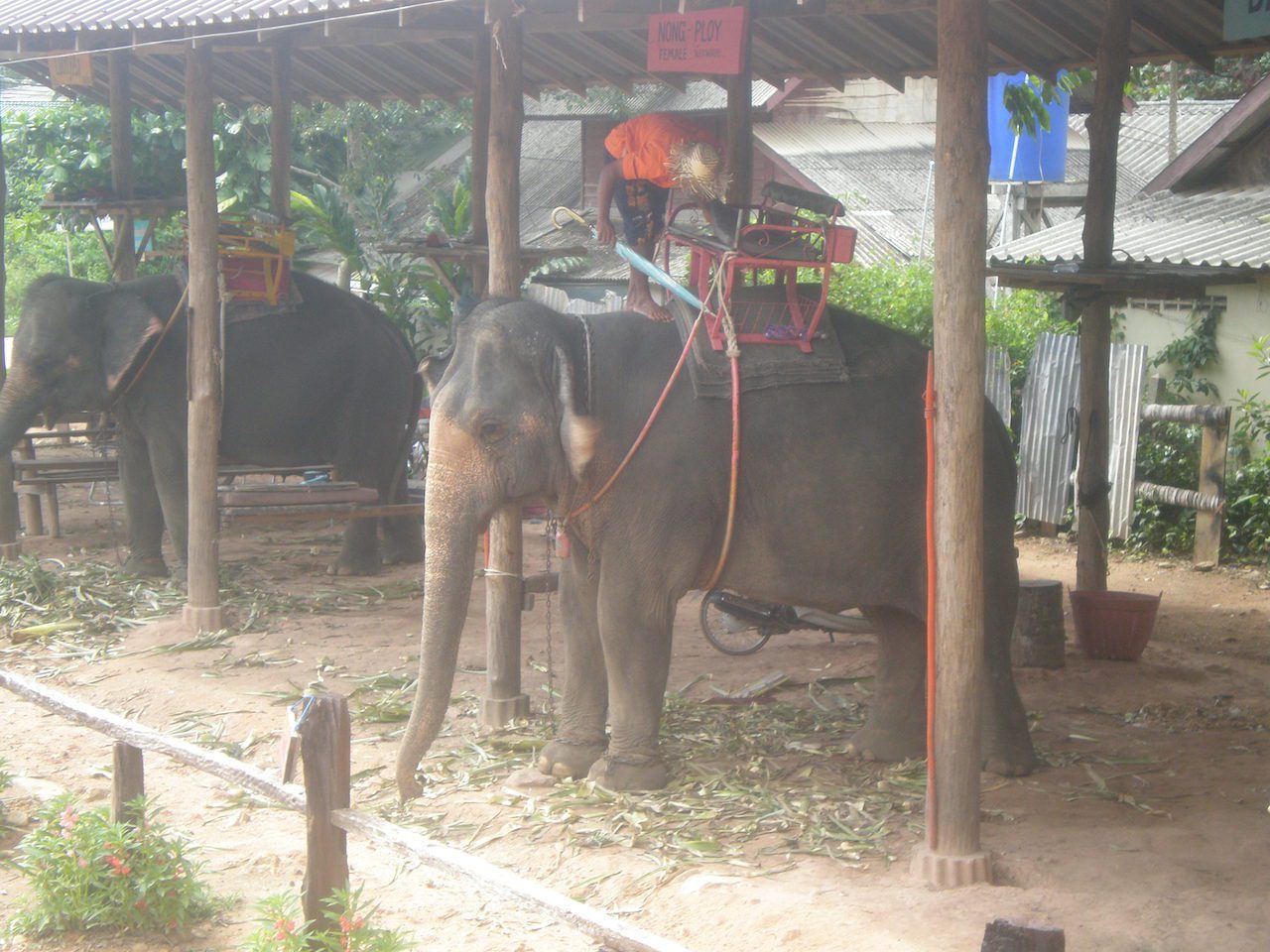 The shocking truth about elephant riding in Thailand

When I first went backpacking back in 2011 it was a right of passage to climb onto an elephant’s back and to be paraded along the street. But nowadays, things are very different. Society has become more aware of animal welfare and ethical tourism has moved to the forefront of travel planning.

Is elephant riding legal in Thailand?

Yes, it is legal to ride elephants in Thailand and elephant riding is actually a big part of the tourism industry in Thailand.

Elephant tourism plays a huge part in the country’s economy, with many inbound tourists choosing to visit elephant sanctuaries where they can interact with these majestic creatures.

However, just because something is legal does make it morally correct. Everyone will have their own ethics when it comes to animal cruelty and wildlife tourism. And if you are keen to ensure that elephants are protected then you won’t want to take part in elephant riding in Thailand.

There are many reasons why elephant riding in Thailand is a negative part of the country’s tourism efforts. You’ll find some of them below…

The elephants are trapped

Elephants, like all animals, are not designed to be in captivity. Many of the thousands of captive elephants across Thailand were captured as babies, torn from their families and forced into a life that stunted their growth, metaphorically and sometimes literally.

Breeding elephants in captivity is very difficult, so being captured is how most of the elephants at sanctuaries and visitor centres got there. The actual process of poaching an elephant from the wild is a violent and distressing one. And the life experiences these elephants go on to have following their capture isn’t much better.

At many elephant ‘sanctuaries’ across Thailand and in other countries, the elephants are taught to fear humans. This is so that they will act with compliancy. From babies they are tied up, starved and beaten in what is known as a ‘crush’. This is the act of breaking a young elephant’s spirit. And it’s mostly true what they say: an elephant never forgets. This means that, with their long memories, elephants remember this period of abuse for the rest of their lives. It ensures that the elephants will do what the trainers (also known as mahouts) say, and are more easily trained.

They are also commonly beaten with hooks and sticks that have nails poking out of them – this is when they are seen to be misbehaving or not following orders, or being too slow to respond. The mahouts want the animals to be constantly putting on a performance for those tourists who are there for elephant riding in Thailand.

With elephants being torn from their natural habitats and their families, there are obviously fewer in the wild. This means fewer chances to breed, meaning the numbers of Asian elephants are falling.

Elephant riding in Thailand is directly contributing to the dwindling population. These beautiful creatures deserve better than this.

Elephants don’t exist for our entertainment

While we all have a different moral compass, many people do question the use of elephants and other animals in entertainment like this. Circuses and zoos often get a bad reputation, and this is extended to elephant riding in Thailand and other places.

‘Sanctuaries’ and visitor centres that offer elephant rides also let you interact with baby elephants (which is another thing that makes them submissive and means they could never be released into the wild), and often the elephants will put on some sort of show. Whether this is rolling or fetching logs, or painting a picture for the audience, it is something they would never do in their natural habitat. These elephants are being forced to display unnatural behaviours. Regardless of anything else, this is unfair to them.

In 2016, elephants were removed from all U.S circuses. This was thanks to a successful campaign by animal rights activists and lawyers. Dr. Jan Schmidt-Burbach, who is a senior wildlife and veterinary adviser for World Animal Protection, said that any elephant tourism, no matter how well-intentioned, drives a market where abuse is inevitable. The group insists all elephants need to be on protected reservations, with minimal contact, often limited to observation, sometimes from afar.

There is little regulation surrounding elephant riding in Thailand

This means that in terms of visitor safety and treatment of elephants, things can be a bit sketchy.

Although a spotlight has been cast on the way elephants are treated in Thailand – thanks to a rise in ethical tourism and plenty of pressure from the rest of the worldwide tourism industry – nobody really knows what happens when the last bus departs from these so-called sanctuaries.

With the lack of regulation in and around the industry, there is no way of knowing how the elephants are really treated behind closed doors. When guests play witness to beatings and see the blood marks behind elephants’ ears, who’s to say that what happens when nobody can see isn’t a whole lot worse?

And this lack of regulation can be dangerous for visitors too. With most travel insurers already making it clear that you’re not covered for any injuries that occur while elephant riding in Thailand, if anything happens there is likely nothing you would be able to do about it. Some things are just best avoided!

Fundamentally, elephants are wild animals. Despite having had their spirit cracked and becoming more domesticated, being this close to a ginormous wild animal has its dangers.

It is bad for their health

Elephants’ spines are not designed to carry the weight of humans. This means that elephant riding in Thailand can actually be extremely painful for the elephants, therefore further contributing to their life of distress.

With their bad backs the elephants will likely become slower as it gets harder to move, which will in turn earn them a beating from the mahouts. Their legs and feet are affected by this extra weight, too.

Some centres use a chair (known as a howdah) for the guest to sit on, which is attached to the elephant’s back. Further complications can arise from this. These chairs rub against the elephants’ backs, and over time this causes painful blisters which can become infected. This leads to illness and sometimes even to death. On top of that, it is of course not very comfortable for the elephant!

Germs and illnesses can be passed between humans and elephants. Not only are you putting yourself and your family at risk by getting so close to these beautiful creatures, you are putting the animals at risk too.

Elephant riding in Thailand probably isn’t that much fun

We know it isn’t fun for the elephants involved but let’s face it, is it even that enjoyable for human visitors? Or does everyone want a turn to get that ‘cool’ selfie for Instagram, because they’ve seen other people do it? There is a lot to be said for not following the crowd, and not just doing something because it’s the in thing. As more and more people are becoming attuned to the cruelty of elephant riding in Thailand, less people are taking part.

And as the social media hype dies down and we see less photos of white tourists in oversized tunics hanging off an elephant, will anybody want to do it at all? Probably not. Knowing that the animals are in distress and not being sure that it is safe for you should be enough to put anybody off! There are so many other ways to spend your time in beautiful Thailand.

Ethical elephant sanctuaries to visit instead

There are plenty of ethical elephant sanctuaries you can visit which don’t offer elephant riding in Thailand. Find a more in-depth article about them HERE.

Considered a pioneer in the way it cares for elephants, this is a retirement home for these magnificent creatures. They offer true sanctuary and love. On top of this they have a huge focus on rainforest restoration and the cultural preservation of the nearby area. ENP aim to educate their guests too. They are one of the best ethical elephant sanctuaries in Thailand!

Run by a former camp owner and a world-renowned elephant rescuer, this sanctuary introduced the Saddle Off program. It has since been adopted by other sanctuaries. Phuket Elephant Sanctuary has an extraordinary high level of care. Vvisitors love seeing the retired elephants playing, eating and bathing.

#3 Friends of the Asian Elephant Hospital

Located in Lampang, this elephant hospital cares for sick and injured animals. Places that offer elephant riding in Thailand do not take great care of their elephants, as mentioned above, so it is a sad reality that elephant hospitals also need to exist. The Friends of the Asian Elephant Hospital pay great attention to the needs of the elephants in their care. They happily nurse them back to health while giving them somewhere comfortable to live.

Elephant riding in Thailand- would you do it?

I am horrified to think that I participated in elephant riding in Thailand in my younger years. Fortunately though, people are more aware now of the impacts and consequences and many of the former elephant tourism attractions are now being converted into sanctuaries. That being said, there is still work to be done though. There are plenty of tourists who are not aware of the negative impacts of elephant riding in Thailand, but hopefully this article has helped to shed some light on this important topic!

Did you enjoy this article? Here are some others that may interest you.