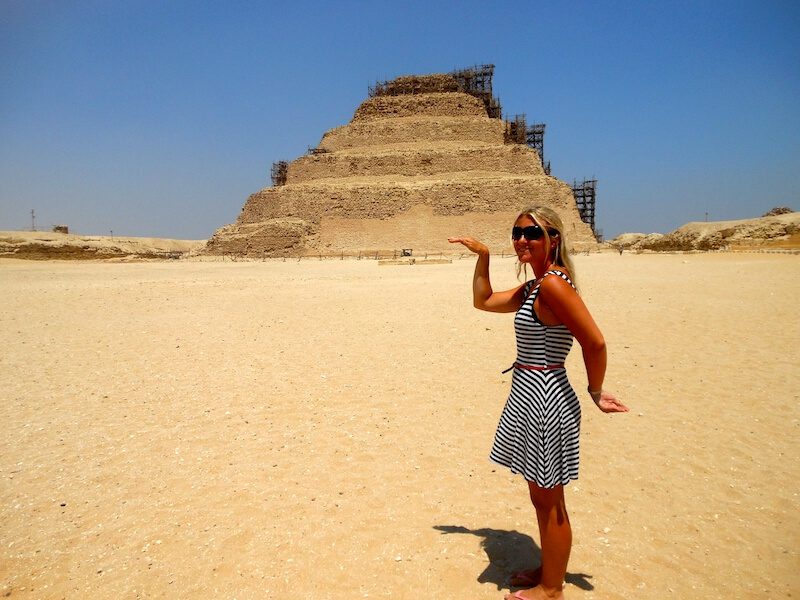 The Egyptian Museum, also known as The Museum of Egyptian Antiquities, is home to over 120,000 items. It’s one of the most comprehensive museums in the world and is a must on the travel itinerary of anyone travelling Egypt.

Here’s your complete guide to visiting…

About the Egyptian Museum

Founded in the 1800s, the museum has had many different locations over the years. From the Ezbekeyah Garden to the Cairo Citadel, a former warehouse in Boulaq to a former royal palace in Giza – until they were moved, finally, to their current location in 1902.

The museum now is located in Tahrir Square. In 2011, the Egyptian Museum was broken into during the Egyptian Revolution. Two mummies were destroyed, other artefacts damaged and lost. Some have since been found, and displayed in an exhibition called Damaged and Restored.

The museum contains many artefacts that were recovered from the Egyptian pyramids (which are REALLY interesting, you know! Take a look at this post to see the interesting things that I learned during my trip…)

Getting to the Egyptian Museum

You can book tours to the museum which include a guide, and offer transport to and from your hotel. Make sure to check when booking if these tours include your museum admission fee! If you’re looking for something a bit different, some companies offer night time tours of the museum!

From the centre of Cairo, the Egyptian Museum is a 5 minute walk. If your hotel is further out of the city centre, taxis are readily available to take guests the short distance to the museum.

From Giza, it takes around 15-20 minutes to drive to the Egyptian Museum. If you have hired a car, drive via Charles de Gaulle as this is the fastest route. Taxis are available too!

What you can expect to see at the Egyptian Museum

There is SO much to see at the museum. From masks to mummies and everything in between, here are some of the best things you can catch at the Egyptian Museum…

It goes without saying that the most iconic artefact at the museum is Tutankhamun’s mask. When thinking about Ancient Egypt, it is often the one image that springs to mind. See it right there in front of you will blow you away!

The Grave Mask of King Amenemope is bright gold all over. However, it’s gilt – not solid gold. A pharaoh from the 21st Dynasty, Amenemope was buried, moved and then discovered in the 1940s.

There is a statue of Khufu, a pharaoh from the fourth dynasty. He built the greatest pyramid of Giza! Discovered in 1903, it is made of ivory and stands at only 7.5 cm tall.

Among all the other art in the Egyptian Museum are the three triads of Menkaure. A triad is art that depicts three figures, usually gods or kings. There are actually three separate triads of Menkaure; all made from schist/greywacke, Menakure is in the middle of each one and is always flanked by the goddess Hathor. He wears a crown and the false royal beard. The statues of the three triads are well-detailed: muscles, tendons and veins are all visible.

There is plenty of salvaged wall art, carefully painted with scenes from Ancient Egyptian history. These show things from everyday life to burials, the afterlife and more.

The innermost coffin of Yuya, a powerful courtier from the 18th Dynasty, is on show too. He was married to Tjuyu, and at one point their tomb was one of the most spectacular discoveries made in the Valley of the Kings. Both mummies were virtually intact!

There are, dotted around, all the ‘grave goods’ that have been found when tombs have been discovered. These include canopic jars, jewellery, toys, books, weaponry, furniture and artwork. Most have placards that explain what you’re looking at and where (and when!) they were found.

And of course, there are mummies. Mummified animals are free to look at in the main body of the museum, but as mentioned earlier you can pay an extra fee to see the ‘Mummy Room’. There are a couple of royal mummies and plenty of regular mummies, and how incredible is it to be able to see people that roamed our planet thousands of years before us – some still with hair on their heads!

Some important things to note

Guides are available at the museum. They will be milling around the entrance and you can pay to have them walk you through the museum, giving you a more detailed explanation of the artefacts on show.

There is no café at the Egyptian Museum. Bring bottled water with you, especially if it’s hot. There are hotels, cafés and bars nearby, too.

TIP: Talaat Harb Square is a 12 minute walk from the museum and there are plenty of things to eat as well as shops, market stalls and more.

The Grand Egyptian Museum (the GEM) is set to open in 2020. A lot of the artefacts that are currently housed at the Egyptian Museum will be moved to the new museum, which will be the largest archaeological museum in the world upon completion.

Places to stay near the Egyptian Museum

At just 700 yards from the museum itself, the Miramar Downtown is a basic but clean and welcoming hotel. The rooms have en suite bathrooms and free WiFi, and the hotel has a 24-hour front desk. Breakfast is available, and reviews praise the staff as being friendly and helpful.

The Gardenia Hostel, at 900 yards from the Egyptian Museum, is a great budget option. With private rooms of varying sizes as well as dormitories, free WiFi, food available on site and staff who speak a multitude languages, it’s a great stop for long-term travellers and budget holidaymakers alike.

Grand Palace Hotel is only 550 yards from the museum. Every room has a patio and the hotel has free WiFi, a 24-hour front desk, a designated smoking area and even a wake-up service!

So there you have it – a complete guide to visiting the Egyptian Museum in Cairo. If you’re interested in Ancient Egypt, this is an absolute must-visit for you.