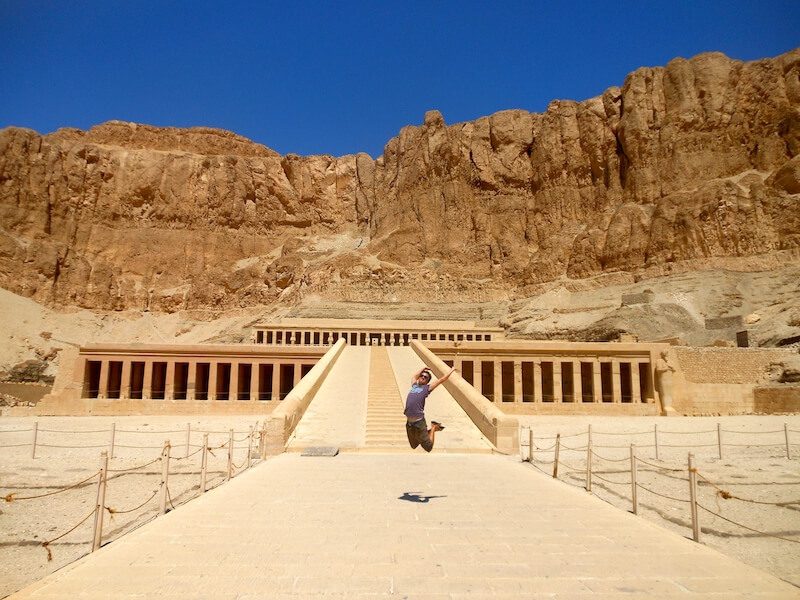 While your mind may automatically conjure images of pyramids and a long winding river, there is so much more to Egypt – especially when it comes to archaeology and history. There is so much to see and explore aside from the most famous sights, and Deir el Bahari is one of them. Here’s your complete guide to planning a visit!

What is Deir el Bahari?

Translated as ‘the Monastery of the Sea’, Deir el Bahari is the name of a complex of mortuary temples and tombs. It is on the west bank of the Nile in Upper Egypt – just opposite the modern city of Luxor. It is part of the Theban Necropolis.

Did you know: a mortuary temple is a temple erected adjacent or near to a pharaoh’s tomb, to commemorate their reign and for use by their ‘cult’ after their death.

Mentuhotep II built an unusual temple. His mortuary temple complex was built on multiple levels in what is known as the great bay at Deir el Bahari. There was a 16 metre wide (150 ft) causeway, which no longer exists. The temple has a forecourt, entrance gate, a terrace, underground passages, statues, colonnades, an unfinished tomb, shrines, chapels and a hypostyle hall.

Hatshepsut’s mortuary temple is the main focal point of Deir el Bahari. It is known as Djeser-Djeseru. This translates as ‘the Holy of Holies’, and it was designed by the aforementioned Senenmut who, along with being an architect, was rumoured to be Hatshepsut’s lover.

The temple is built into a cliff faces, and is approximately 30 metres (97 ft) tall. It is made up of three layered terraces, with square piers and double colonnades, connected by long ramps once surrounded by gardens. Statues which were originally on the terraces – Osiris, sphinxes, Hatshepsut herself – were destroyed after her death.

Also at Deir el Bahari, you can see the abandoned Temple of Thutmose III. It was dedicated to Amun, but other than that not much is known about it. It was heavily damaged during a landslide in the 20th Dynasty. After this, it was used for building materials and as a Coptic cemetery in Christian times.

Where is Deir el Bahari?

As mentioned, you can find Deir el Bahari on the west bank of the Nile. If you’re familiar with ancient Egyptian archaeological sites, then you won’t be surprised! A lot of the bucket-list places in Egypt are located here, on the grounds of the ancient city of Thebes.

The modern city of Luxor offers a gateway to Deir el Bahari and everything else you could dream of seeing.

To get to Deir el Bahari, there are a number of different ways of going about it. If you’re staying in Luxor and have access to a car, it takes around 40 minutes to drive to the temple complex from the city centre. There is a car park, and you then ride a small road train to the actual temples. This train will cost you a couple of Egyptian pounds per person. It’s well worth it to avoid the long walk in the heat!

TIP: it’s hot in the area, and Deir el Bahari does not offer much shade. Think about this when packing, and opt for outfits that will keep you cool such as a cheesecloth shirt and shorts or a thin dress, and a hat to keep the sun off your scalp.

Organised tours can take you to Deir el Bahari. Most tours that cover the sites of Luxor will incorporate this temple complex into the day, whether you’re coming from Hurghada or staying nearby. You can travel in by air-conditioned coach, and often you’ll have a guide with you to show you around.

Nile cruises often incorporate trips to Deir el Bahari, as they do many other Egyptian sites in the area. A stylish and interesting way to travel, there are many different cruises you can do along the River Nile!

Read also: Visiting the Colossi of Memnon: A complete guide

It isn’t possible, of course, to stay super close to Deir el Bahari. However, there is some accommodation not too far away, with plenty more in Luxor itself…

Nour el Gourna is a restaurant and hotel with traditional decor. Some rooms have a view of the Colossi of Memnon, so you’re not far at all from some of the most exciting archaeology Egypt has to offer. With single, double, twin and triple rooms there’s something for everyone, and you can park free of charge too. There is a terrace with outdoor seating, and a shared kitchen if you need to use it. 24-hour check in is available too. Reviews praise the fantastic location and lovely food.

Around a mile from Deir el Bahari you’ll find the New Memnon Hotel. It has a rooftop coffee bar and restaurant, which gives it an extra special feel. You can expect traditional dishes to be served here. Free WiFi and parking is available, and you can check in at any time of day – or night. Rooms have their own fridge, TV and bathroom, and previous guests cite the staff as being friendly and the food as exceptional!

For your own apartment, check out Memnon Street Al Queen Apartments – you’ll have your own kitchen and bathroom, space to do laundry, a balcony and patio as well as stunning city views. Apartments are air-conditioned and have free WiFi as well as somewhere to park, a barbecue, and out door seating. The decor is crisp and clean!

That’s everything you need to know when planning a trip to see Deir el Bahari. The location is a fascinating look into the history of ancient Egypt.