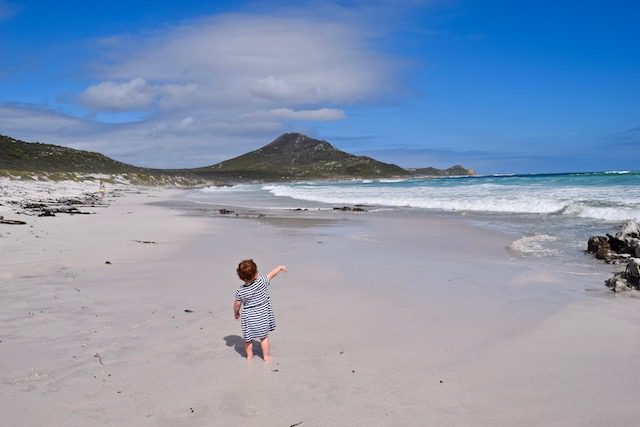 The Cape Point promontory in South Africa is a destination that should be on any South Afric travel itinerary. It’s at the southeast corner of the Cape Peninsula, a beautiful mountainous area at the extreme most southwestern tip of the country.

We took a day trip from Cape Town to the Cape Point area and it was a highlight of our trip through South Africa! Less tourists and more nature, it was a wonderful day trip. If you’re planning a trip to South Africa, read on to discover a guide for travelling to Cape Point.

You can visit at any time of year, but I recommend visiting Cape Point in the warmer months as it gets pretty cold and windy in winter!

Cape Point is fairly temperate. June-September are the coolest months, with average temperatures ranging from 10°C-18°C. These months are also some of the rainiest: June, July and August have 10-11 days of rain per month.

The warm season is from December until March. Temperatures range from 15°C-24°C, with only a couple of days of rainfall each month.

The humidity in Cape Point is fairly high. Overall, the average annual humidity is 76% – with July being the most humid, and November being the least humid.

During our day trip we had lunch at the Cape Point restaurant. Admittedly, it was the only option available to us in the area, but luckily it was very nice!

This is the most famous restaurant in Cape Point, which is located at the Cape of Good Hope. Since December 1995, the Two Oceans Restaurant has been serving sushi and seafood. With glass walls and a sea view, it’s almost like being on a cruise ship – just without the sea sickness!

The 3-course set menu costs R385 (£22 GBP). You’ll find delicacies such as game fish, ostrich carpaccio, citrus cured hake, and Norwegian salmon on the menu. They also have vegan options available! There’s a separate shellfish menu, a kid’s menu and a range of sides too.

The Two Oceans Restaurant opens at 9am, and serves breakfast until 11am. It then serves lunch from 12pm until 4.30pm. For more information and to make a reservation, click here.

Read also: The best ostrich farms in Oudtshoorn to visit

Many people are put off visiting Cape Point because of the prospects of climbing, but fear not! The funicular is a handy (and fun) way to reach the top. My daughter loved it!

The journey takes you from the Cape Point lower car park up to the viewing point at the upper lighthouse. The views of the Cape of Good Hope are spectacular. To ride the funicular, the prices are as follows:

Things to do at Cape Point

One of the main reasons to visit Cape Point, and the Cape of Good Hope itself, is the stunning views. The sparkling blue ocean, the sky that changes colour throughout the day, and the abundance of flora and fauna all around – you’ll never get bored of just sitting and taking it all in.

The aforementioned funicular and the Two Oceans Restaurant are always high on the list of recommendations. As well as those, Cape Point has so much history. There are audible tours you can download before you visit which will tell you all you need to know!

There’s a shipwreck trail, tidal pools and game-watching opportunities. No matter your age, interests or abilities, there’s something to do at Cape Point.

Read also: A guide to visiting Boulders Beach (and to see lots of penguins!)

There are actually multiple beaches at Cape Point. All offer soft sand and blue water – though there are no lifeguards on duty, so always be careful when swimming or surfing. If you have the correct permits, you can often fish or dive at these beaches so if that’s something you’re interested in, it’s worth looking into. Some of the best beaches at Cape Point are:

Due to the few short paths you need to walk down, Maclear Beach is fairly quiet. This is also the closest beach to the photo-famous Cape Point signpost.

This is the very tip of Cape Point. It’s the beach you’ll see from the funicular, and the sea-level view is even more amazing.

Heralded as the ‘most unspoilt’ beach in the area, this is one for nature lovers. Tourists often spot baboons and ostriches on the sand! We spent an afternoon here and I can honestly say that it is one of my favourite beaches I have EVER visited!

At Cape Point, you’ll get to see something special. The waters of the Atlantic Ocean and the Indian Ocean collide – though they don’t mix. This makes it look like a line has been drawn through the water, and it’s just fascinating to see.

You may not always be able to see it, however. Geographically the two oceans meet at Cape Agulhas, further down the coast. The meeting point can often be spotted from Cape Point, though, and it does migrate seasonally.

Where to stay when visiting Cape Point

Now you know a bit more about Cape Point, you might be looking for somewhere to stay. For some of the best picks, see below:

Just 11 miles (around 25km) from Cape Point, Simon’s Town is a great place to stay. It’s home to the South African Navy’s naval base, and there’s plenty of restaurants, coffee shops and things to do.

La Pergola is a 30-minute drive from the Cape of Good Hope. It’s 2 person apartment with parking, free WiFi, a garden and pool as well as a fully equipped kitchen and en suite bathroom.

Albatross Guest House has several rooms and apartments. They all have balconies, kitchenettes and bathrooms. There’s free parking and WiFi, a garden and a shuttle service.

Watercolours House has various suites, all with a sea view. Parking and WiFi are free of charge, and there’s a pool, library and garden. Cape Point is just 10.2 miles away.

One of the most famous cities in the world, Cape Town is about an hour away from Cape Point. There’s a plethora of things to do, and some fantastic places to stay.

Check Inn Hotel has various rooms for a budget stay. WiFi is free and there’s parking available as well as a bar and restaurant, and a 24h front desk.

There you have it – a guide to visiting Cape Point, and where to stay when you go!