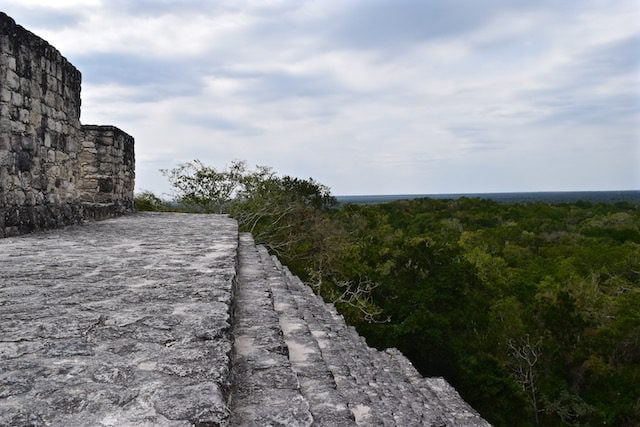 If you’re reading this blog post, you’re probably planning – or at least thinking of – visiting Calakmul. It’s no mean feat, and a big trip to plan so without further ado, here are some top tips for visiting Mexico’s hidden Mayan ruins…

First of all, what is Calakmul? In short Calakmul, meaning City of the Two Adjacent Pyramids, are some Mayan ruins in Campeche, Mexico. The Calakmul ruins are located in the jungles of the greater Petén Basin region, 22 miles from the border between Mexico and Guatemala. It also lies 24 miles north of another set of Mayan ruins, El Mirador. Calakmul is one of the lesser-visited sites in Mexico, making it perfect for people who want to see Mayan ruins in Mexico without having to battle with other tourists. The area surrounding Calakmul is covered by stunning dense forest, and is generally known as the Calakmul Biosphere Reserve. For some facts, statistics and general information about the Calakmul Biosphere Reserve, click here.

A brief history of Calakmul

Calakmul dates back to before the Preclassic Maya period, but until we actually reach the end of the Preclassic period the records are sketchy at best. It is thought that Calakmul possibly inherited its political authority from another city, perhaps El Mirador or Nakbe – but this can’t be 100% confirmed. Records suggest that a king was enthroned in Calakmul in AD 411, with site ruler (not a royal, however) being appointed in AD 514. The records are still few and far between, but from what has been pieced together by historians over the years a few major moments have been laid out:

In AD 562 Sky Witness (the king) defeated neighbouring city Tikal and sacrificed their king, Wak Chain K’awiil – this lead to Calakmul being the dominant city of the time.

Sky Witness is last referenced in records in AD 572, and historians think this marks the time of his death.

In AD 599 Uneh Chan attacked nearby city of Palenque defeating their queen, Lady Yohl Ik’nal – from then on, Palenque held a grudge against Calakmul. He then attacked Palenque again in AD 611 – these attacks, records say, may have been an attempt to seize control of the wealthy trade routes passing through the western Maya region.

Calakmul went on to have various different kings one the next few decades: King Yuknoom Chan (enthronement date unknown, but possibly around AD 619), followed by Tajoom Uk’ab K’ak’ in AD 622. Yuknoom Head became king around AD 630, records suggest, and he regained control of nearby Naranjo at this point too.

King Yuknoom Che’en II took the throne in AD 636 – he is referred to as Yuknoom the Great by scholars, as Calakmul had most of its success during his reign. He was also likely responsible for the construction of the palace complexes that are an important part of these Mayan ruins.

From then until around AD 736, there are yet more kings and more battles: Yuknoom Yich’aak K’ak was crowned in 686, and in 695 Calakmul was at war with Tikal again. It is likely that this was the start of the decline of Calakmul.

After this point, the records are vague at best – but there seems to be a cycle of new kings, spectacular battles, and political ups and downs. If you’re particularly interested in learning more about the history of Calakmul, various papers can be found online written by people in the know such as Kai Delvendahl. Click here to read more!

How to get to Calakmul

Now you’re a bit more familiar with what Calakmul is and the history of Calakmul, you might be wondering how to get to these Mayan ruins. Calakmul itself is located in the Mexican state of Campeche; the capital city – also called Campeche – is a brightly coloured port city often referred to as Mexico’s Rainbow City. There are plenty of things to do in Campeche such as visiting the architecture museum, Museo de La Arquitectura Maya, or embarking on a sunset city tour on a pirate ship. But one of the most exciting (and least touristy) things to do when visiting the city Campeche is, of course, visiting the Mayan ruins of Calakmul. So, how can you get there?

Calakmul is one of the best Mayan ruins in this part of Mexico and is well worth the trip. One way to reach the ruins is by hiring a car- it’s over 4 hours each way, so it’s worth setting off early, but it is doable. Just make sure to plan your route thoroughly beforehand! This is easily doable with online map services and GPS. Driving to Calakmul and back to the city of Campeche isn’t something you are realistically going to do in one day, however, if you want to be able to make the most of being at the ruins.

There are plenty of places you can stop along the way to make the journey and the whole experience a little bit easier; the best is the village of Conhuas, which is really close to the site and is also home to the Calakmul Cabanas. Tourists can stay here and get up early to head to Calakmul itself – previous guests do recommend you take earplugs, though, as the roosters are a bit noisy!

Perhaps you are planning to visit Calakmul from somewhere else; guided tours to Calakmul leave from Campeche but also from the closer stop-gap town of Xpujil as well as Bacalar, famous for its Seven Colors Lagoon, and Chetumal, a city that a lot of people tend to skip on their itinerary but that does have a few things to offer. There are various hotels in Calakmul – not at the ruins, of course, but nearby as well as in the aforementioned areas of Campeche, Xpujil, Bacalar and Chetumal. The closest hotel to Calakmul is Hotel Puerta Calakmul, an eco-hotel that has a pool, private bathrooms, jungle views, WiFi, an onsite restaurant and more. The hotel is located at the entrance to the road that leads to Calakmul – however, don’t be fooled: it’s still 60km away…

Other options include the previously mentioned Calakmul Cabanas, who have they own guide to the area, which is also incredibly close to the edge of the Calakmul Biosphere Reserve meaning you are staying in close proximity to the ruins, too. They offer breakfast and space to park your car. The Chicanná Ecovillage Resort in Xpujil is popular with tourists visiting the ruins at Calakmul; with a 24-hour front desk, a pool, on-site restaurant and bar, free parking and more, it’s easy to see why. At 23.5km from the edge of the Calakmul Biosphere Reserve it’s still a distance away from the ancient Mayan ruins, but a good base to consider.

Some more information about Calakmul

Visiting Calakmul is a big deal – it’s a great opportunity to see Ancient Mayan ruins in Mexico that aren’t completely overrun by tourists, drones and money making schemes. You do have to pay when visiting Calakmul, though it’s not a lot; if you book a guided tour, the fees will be included but if you’re doing it yourself, bring pesos to cover the costs. You pay an initial fee (for your vehicle AND each passenger) when entering the Biosphere, then an extra fee around halfway down the long (approx. 90 minute!) road to the ruins. You pay again when getting to the actual ruin site but the fees aren’t massive – local information quotes it to be around 130pesos for two people with the three aforementioned fees.

Within the Calakmul Biosphere Reserve and at the site of the ruins, there are approximately 1600 varieties of plants and 94 different species of mammal – you might see jaguars, if you’re lucky, alongside armadillos, tapirs, howler monkeys and more. There are also around 400 types of butterflies in the area, 350 species of birds, 16 types of amphibians and 50 species of reptiles! Don’t forget your camera, because some of these animals you might never see again. Alongside visiting the Calakmul ruins, hiking and birdwatching are popular activities in the area.

The weather at Calakmul ranges from the low 20s to the high 30s throughout the year – it’s a relatively steady warm climate, but not excruciatingly hot for visitors. However the rainy season lasts from May/June to November, so do bear that in mind. It’s advisable to cover up, with full-length trousers and long sleeves, to keep a layer between yourself and any stinging bugs or plants that might be around. General advice says that running shoes will be fine, but walking/hiking boots are even better as you’ll be on your feet a lot!

So there you have it, some tips for visiting Mexico’s hidden Mayan ruins including where to stay when visiting Calakmul, how to get to the ruins and a brief history of Calakmul. You can find plenty of stories from previous visitors on the internet, too.