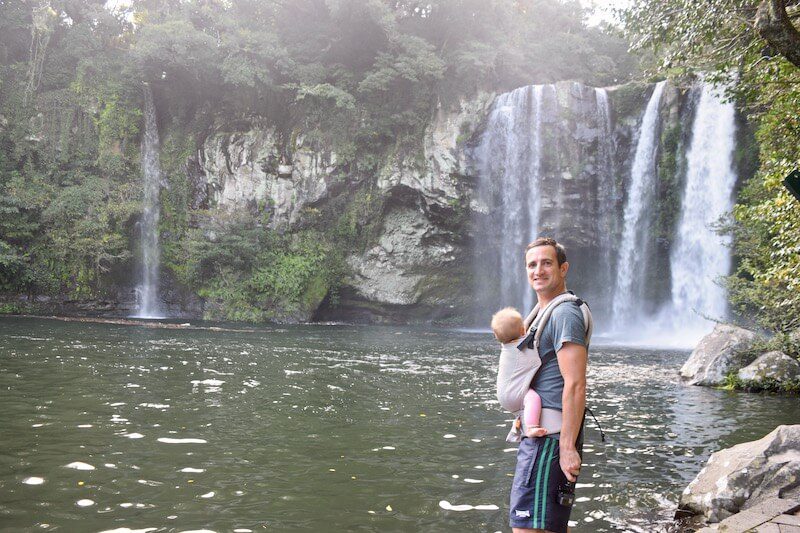 The best Jeju Waterfalls: A guide for travellers

We love a good waterfall and Jeju did not disappoint! In fact, the Jeju waterfalls are some of the best I have seen without having to take a long hike through forests! In this post I will tell you all about Jeju’s beautiful waterfalls and give you some tips on which ones are the best to visit and why.

Where are the Jeju Waterfalls?

First of all, some background on the area. Jeju Island, home to all of the incredible Jeju waterfalls, is an island in Jeju Province of South Korea. A country known for K-Pop and major technological advances, waterfalls maybe aren’t what springs to mind when you think of South Korea. But on Jeju Island, there are plenty of them as well as underground caves, volcanic landscapes and beautiful, scenic beaches.

The island is 1,940 metres above sea level, and is South Korea’s highest peak. It was named as one of the New7Wonders of Nature, but it has plenty tourism, casinos and museums too – there’s even a sex-themed sculpture park! Because of the island’s self-governing status, anyone can visit without a visa.

Getting to see the Jeju waterfalls is fairly easy. The island has an international airport – most flights that arrive in Jeju are domestic flights from Gimpo, Sacheon, Gwangu, Cheongju and Daegu. However, you can catch international flights to Jeju from Shenyang, Changchun, Pudong and other cities across Asia.

You can also catch a ferry from one of the following five locations:

Ferries take between 1 and 2 hours. There is an overnight ferry (from Busan) which takes around 12 hours. However, it is cheap and fairly comfortable so if you’re travelling on a budget, this could be worth looking into.

There are six waterfalls on the island of Jeju. Whether you want to sunbathe, swim or take the perfect Instagram snaps (I took loads, you can see them over on my Instagram account), there’s a waterfall for you. We structured our Jeju itinerary around the use of our hire car; which made visiting the Jeju waterfalls really easy.

If you don’t have a car on your trip, I would recommend taking a tour (public transport is a bit slow and you might not have time to visit all of the Jeju waterfalls if you rely on public transport). My go-to for tours is always Viator because they have such a great range of tours that are generally pretty good value. You can click here to see some of my favourite Jeju tours.

The Jeju waterfalls are conveniently located relatively close to each other (except for Yongam-p’okp’o, which is on Mount Hallasan). You could squeeze five of these waterfalls into one day of sightseeing without feeling too rushed. We spread our visits over a couple of days, however, because we wanted to take our time as we were travelling with a baby and a toddler.

Tip: Google maps doesn’t work well in Jeju. I’ve read that this is because South Korea do not want everything visible to North Korea…. Apple maps, however, works pretty well.

Here is a map I created from Google, showing where the waterfalls are located, to give you an idea of proximity. In case you aren’t aware of scale here, you can drive the width of the island in around 2 1/2 hours- so hopefully that gives you a rough idea of travelling times by car.

So, without further ado, here’s a breakdown of what each of the Jeju waterfalls has to offer…

Donghong-dong, Seogwipo, Jeju Island. Close to the ocean, Jeongbang Waterfall is 23 metres high and around 8 metres wide. Some sources say it is the only waterfall in Asia the falls directly into the ocean! However, it technically falls into a sheltered cove rather than the ocean – so this has often been disputed.

Legend states that a holy dragon lived under Jeongbang Waterfall. Its spirit is said to be contained in the water, bringing rain in times of drought and also curing diseases. Another tale goes that Emperor Jin of China (259 BC – 210 BC) sent one of his servants, Seobul, to Mount Halla. The emperor wanted the magical herbs of eternal youth, which the servant failed to find. He did, however, stumble upon one of the Jeju Waterfalls. There is an inscription on the wall of Jeongbang Waterfall that says Seobulgwacha and refers to the servant’s journey.

Topyeong-dong, Seogwipo, Jeju Island. Lying just 300 metres to the east of Jeongbang Waterfall, within walking distance for most, you will find the smallest of the Jeju Waterfalls.

Sejeongbang Waterfall makes a beautiful swimming spot with its crystal clear blue water, ocean views and stairs to provide easy access. BUT the water is ice cold so swimming is not for the faint-hearted!

Given that Sejeongbang Waterfall is much smaller than it’s neighbouring waterfall, this is less crowded and much more peaceful, which I personally like.

Cheonji-dong, Seogwipo, Jeju Island. Surrounded by greenery, Cheonjiyeon Falls almost looks like water pouring straight from the sky. The name literally means sky connected with land! It is 22 metres high, and 12 metres wide. Landbridges have been formed from large volcanic rocks, and visitors must walk along a landscaped trail to reach the waterfall.

This is said to be the most popular of all of the Jeju waterfalls. It can get quite busy, particularly in school holidays and on weekends.

Cheonjiyeon Falls are illuminated at night, making this Jeju waterfall popular with lovers and photographers alike. There is also a lot of flora and fauna at Cheonjiyeon Falls: whisk fern, migratory ducks and more. You aren’t allowed to swim here, which is worth noting before you go

Cheonjeyeonpokpogwanriso 132 Cheonjeyeon-ro, Seogwipo, Jeju Island. The biggest of all of the Jeju Waterfalls, Cheonjeyeon is a three-tier waterfall created from cold water flowing out of the ceiling of a cave. The name means ‘Pond of the Emperor of Heaven’, and Korean legend states that at night seven nymphs would descend from heaven to bathe in the waterfall’s pond.

The forest surrounding the Cheonjeyeon contains rare plants, making it valuable for scientific research and also for nature lovers to enjoy the views and atmosphere. Swimming is now prohibited, but since ancient times people have believed that if you stand under the waterfall on the 15th day of the 7th lunar month, diseases will be cured by the eighth lunar month.

Above Cheonjeyeon is Seonimgyo Bridge. It has the aforementioned seven nymphs carved into each side, and its red and white colours stand out among the greenery. The bridge crosses from east to west over the stream between the second and third tiers of the waterfall.

This was my personal favourite and we spent a couple of hours here exploring the three different parts of the waterfall.

Tip: the first part of the waterfall is sometimes dry. It’s best to visit when it had recently rained to see it in full flow.

Gangjeong-dong, Seogwipo, Jeju Island. Despite not being a waterfall all year round, this one deserves a mention. Even when there isn’t any water falling, it still makes for a beautiful and peaceful walk – especially during blossom season!

With steps, walkways and plenty of greenery, it’s worth checking out if you’re nearby. However, I wouldn’t necessarily make the trip especially for this waterfall.

This waterfall is often left off of the typical tourist waterfall itinerary in Jeju, because it is not as easily accessible as the other waterfalls.

Yongam-p’okp’o is on Mount Hallasan, so you will need to take a hike to visit it. In fact, I can’t actually find any information on exactly where on the mountain this waterfall is! So I guess you’ll see this one if you’re lucky?

June-August is the wettest time of year, but there are plenty of sunny days throughout the summer too. Whilst it’s most pleasant to visit on a sunny day (and your photos will come out better), if there hasn’t been much rain recently then the water won’t be as impressive. We were out exploring the Jeju waterfalls the day after a typhoon so there was certainly lots of water while we were there!

If you want to see the cherry blossom that adorns the island, plan your trip for early to mid April. The autumn months create beautiful colours around the waterfalls, too.

The best way to get around Jeju is by hiring a car! You can see all of the things that we managed to squeeze into our 5 day trip in the video below.

Hopefully this post has helped you plan a trip to see some of the stunning Jeju waterfalls. They are an absolute must for nature lovers travelling to South Korea, and the island has plenty more to offer, too. Travelling to Jeju soon? Take a look at some of my other posts on what to see and do on Jeju Island!