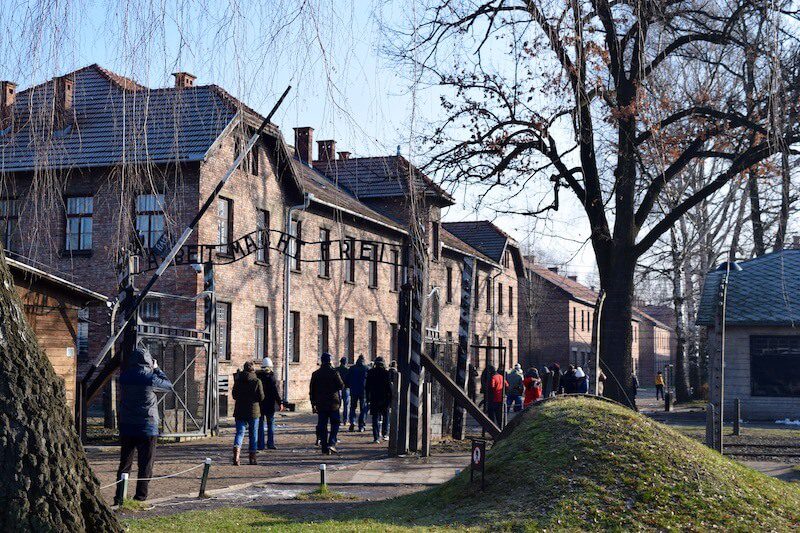 A visit to the Auschwitz Concentration Camps for students is a great way to learn about the tragic historical events that occurred. This can be a great way to teach people never to repeat the horrible histories of the past and to expose them to situations and events that they would not normally encounter in their everyday life. From history to psychology to travel and tourism, Auschwitz Concentration Camps for students can be a worthwhile trip for all.

Auschwitz is one of the major concentration camps associated with World War II. It is located just outside of Krakow, Poland, in a town called Oświęcim. There are actually two sites: Auschwitz I and Auschwitz II-Birkenau. They are 3 km apart. Auschwitz I was originally an army barracks. After the 1939 invasion of Poland the SS converted it into a prisoner-of-war camp. It is one of the most famous concentration camps, serving as a true representation of the horrors that unfolded in Europe during WW2 at the hands of the Nazis. Auschwitz II was built at the tail end of 1941, and mass gassings took place from 1942 onwards. 1.1 million people died at Auschwitz – Jews, Roma, Soviet prisoners of war and more. To visit Auschwitz as a student is a harrowing experience, but one that everyone should strive to achieve if possible, especially as there are plenty of Auschwitz Tours from everywhere in Poland.

Auschwitz Concentration Camps for students is a worthwhile trip whether it’s for a class of secondary school learners or a university visit. A visit to Auschwitz can compliment a range of curriculums. It provides opportunities for value added learning and will be a trip that the students will never forget.

Which subjects would incorporate a visit to Auschwitz?

There are many different subjects that would benefit from a visit to the Auschwitz Concentration Camps for students. The three most noteworthy subjects that would be likely to give you the chance to visit Auschwitz as a student are history, psychology and travel and tourism. There are various reasons why scholars of each subject would head to a concentration camp on a trip. You can find these below.

World War II was and is a huge turning point in history. It is the topic of so many books, films, documentaries, theses, podcasts and more. WW2 was the deadliest military conflict in history: with between 70 and 85 million deaths, no part of the planet was left untouched by this nightmare. From invasions to uprisings with plenty of battles and operations in between, there is a lot to be learnt from World War Two. It affected history in unspeakable ways. There are various different aspects to it – the military history, civilian history, rations, the treatment of Jewish people, weaponry and so much more. All of these things make for interesting history lessons, and the reality of WW2 can be brought home by visiting Auschwitz and other concentration camps.

History students visiting Auschwitz are able to see the buildings that housed these prisoners, the weapons used, the sheer scale on which Nazi Germany sought to destroy those that they did not align with. Rooms are full of row upon row of prisoner profiles: black and white shots of people who died just a few weeks after these photos were taken. Visitors can step inside gas chambers, and see the gallows where Rudolf Hoess was executed by the Allies. This is a really intimate and heartbreaking learning experience, but one that definitely showcases the reality of any history lesson that is focused on World War II.

You might not make an immediate connection between psychology students and a trip to Auschwitz – WW2 is definitely more of a history topic. However, psychology students look into how the mind works and why people do the things they do. One of the famous experiments that you’ll see in any psychology textbook worth its salt is the Stanley Milgram experiment.

‘The Milgram experiment on obedience to authority figures’ was a series of social psychology experiments conducted by Yale University psychologist Stanley Milgram. It measured the willingness of study participants to obey an authority figure who instructed them to perform acts that conflicted with their personal conscience.

This experiment was actually designed with the Nazis in mind. It coincided with the trial of Nazi war criminal Adolf Eichmann, in 1961. Essentially, Milgram wanted to know whether Eichmann and his millions of other accomplices were simply following orders when they did what they did during World War II. Although the experiment has been deemed controversial and (by some) downright abusive towards its participants, it remains one of the most obvious topics on any psychology syllabus today. And this is why psychology students also visit Auschwitz.

Visiting Auschwitz as a student interested in the psychology of the human mind is again a harrowing experience. You are able to see the places where these Nazi soldiers acted in the way that they did – whether simply following orders or not. You are able to get a sense of how widespread their evil was, and see the impact that it had. Look behind glass at piles and piles of human hair, suitcases neatly labelled by those who were promised a better life, children’s toys ripped away from toddlers and youths upon their arrival at this concentration camp.

Students studying travel and tourism could be taken anywhere in the world on their residential visits and the curriculum naturally lends itself to a range of travel and tourism destinations and attractions. But rather than taking the students to a typical mass tourist destination, why not take them to one of the biggest dark tourism sites? The students will learn a lot and it will be a trip that they will never forget….

Visiting Auschwitz as a student: other subjects

Of course, there are other subjects that may well incorporate a visit to Auschwitz. Those studying religious studies, for example, may visit Auschwitz for a deeper learning experience of the Jewish experience during WW2 – by far, the biggest death toll was amongst the Jewish community. Many Jews tragically perished at Auschwitz. There is also a lot to discover about the Jewish community in Poland (Krakow particularly) itself!

Sociology students might also visit Auschwitz for the reasons touched upon when discussing psychology students. Conformity and obedience are huge topics in sociology too, so a visit to Auschwitz would be a great way for students to gain a more profound understanding of these concepts and how they work in real situations.

Why students should visit Auschwitz

Alongside gaining wider knowledge to apply to their studies, there are a number of reasons as to why visiting Auschwitz as a student – or at any age – is something to consider. While some label concentration camp visits as dark tourism it isn’t just about getting a macabre experience

“Those who do not remember the past are condemned to repeat it.”

This George Santayana quote might be from 1905 – and therefore precedes the horrors of Auschwitz – but it is something to bear in mind. One of the reasons why visiting Auschwitz is so important is that it serves as a reminder of the atrocities that happened during WW2. There is a hope that by teaching future generations about genocide, it is less likely to happen again in the future. This is because the impact will be better understood. Whether this is true in the long term remains to be seen. It has still been less than 100 years since the beginning of the war. We are therefore unable to measure this in practice.

Visiting Auschwitz as a student is an important experience in terms of empathy. It is hard to explain the sheer depth of consequence of the war. And, more specifically in this case, the concentration camps. . But when you see how big Auschwitz was (specifically Birkenau, where most of the gassing took place followed by the burning of the corpses) it hits home slightly. When you realise that there were 44,000 such camps across Europe, it hits home even more. It is such a powerful way to show the sheer scale of this war. Shockwaves from WW2 are still felt by various communities today. The way we live is very different from what it would have been had the war not happened. Or, indeed, had it ended differently.

Honouring the victims of the Holocaust

The Holocaust was an act of pure evil. There are no two ways about it – this is different from other ‘dark tourism’ locations, such as the site of the accidental nuclear explosion at Chernobyl. This is a way to remember the large-scale racism that stemmed from one man’s power. It is also a way to honour the victims of this horrific historic period.

Preparing for visiting Auschwitz as a student

For school and college students in particular who are visiting as teenagers or young adults, it can be a distressing trip. There are some ways in which you can prepare yourself (or your students, if you’re reading this as a teacher) beforehand.

In terms of the emotions you and/or your students will feel at Auschwitz, they are likely to be very heavy. Emotions will also be negative. It goes without saying that the horrors that took place here were and still are devastating. The impact cannot be underestimated, and it will leave you feeling like the wind has been knocked out of you. As much as you prepare by reading up on what there is to see at Auschwitz, you might still be incredibly shocked. It is important to accept this. Remember that your feelings are valid.

Of course, there are some practical tips that are worth noting! Here’s some, to ensure students get the most out of their trip to this harrowing location.

By following the guidelines and preparing well, you can ensure that a trip to Auschwitz is an experience that you will remember forever. It really is life-changing.

Alongside Aushwitz you may also wish to visit some of the other nearby attractions in Warsaw for a couple of days– there is plenty to see and do and it is easy to fill a student trip itinerary in this part of Poland!

If you found this article helpful, you may also wish to read: