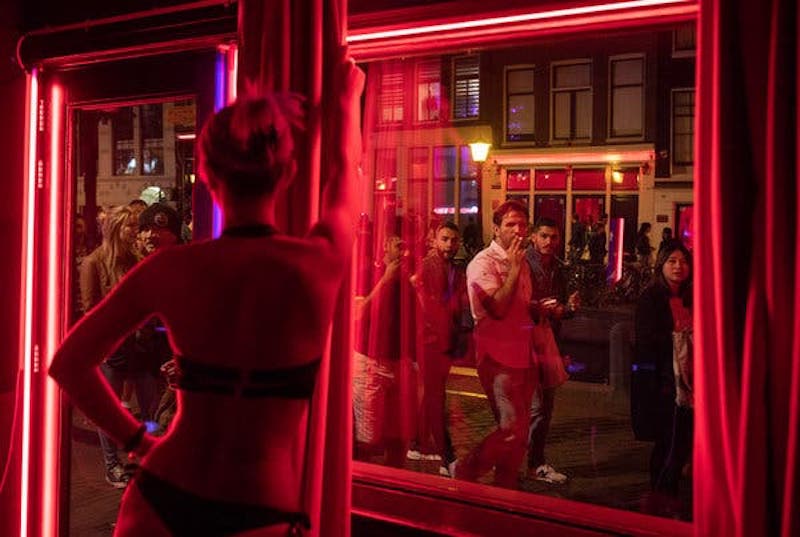 Amsterdam’s red light district: What, why and where

You might think it is only for sex tourists, but I recommend that every (adult) visitor to Amsterdam pays a visit to the red light district. A simple walk through the streets provides an interesting cultural experience that you will not forget in a hurry!

Read on to learn more about Amsterdam’s red light district…

Where is Amsterdam’s red light district?

The red light district in Amsterdam is the oldest area of the city. It is also the most central area of the city, and a tourist hotspot. Within easy reach of canals, hotels, bars, restaurants and museums, it is definitely something to tick off on a trip to Amsterdam.

Amsterdam Centraal is the nearest train station, but there are other ways to get to De Wallen – the name for the general area where the red light district is.

When visiting Amsterdam, the closer to the centre you stay the more expensive it can be, so many tourists stay a bit further out and utilise the brilliant public transport systems here. Take bus 170, 172 or 18 to De Wallen, Metro 51 or 54, or Light Rail 2.

Of course, cycling is a huge part of the culture in the Netherlands – hire a bike and cycle to the red light district from your accommodation!

Amsterdam is famous for its red light district as well as its relaxed rules surrounding cannabis, and being the location of Anne Frank’s house. The Van Gogh Museum is located here, and there is plenty to see in the Rijksmuseum too.

What is a red light district?

Amsterdam’s red light district is one of the most known around the world.

An overview of the red light district in Amsterdam

Sex tourism is on the rise around the globe, and Amsterdam’s red light district is proof of this.

The network of alleyways contains around 300 one-room cabins, rented by sex workers who offer their services from behind a window or glass door illuminated by a red light. This is where the name ‘red light district’ comes from.

TOP TIP: It is an unspoken rule that you cannot and do not take photographs in and around the red light district. It is considered disrespectful to take non-consensual images and/or videos of someone without their consent, as it violates their privacy. Sex workers, and the brothel owners, can and do get incredibly angry if they spot someone taking a photograph while walking through Amsterdam’s red light district.

As well as prostitution you will find sex shops, peep shows, a sex museum, sex theatres and cannabis-touting coffee shops in the red light district.

Amsterdam’s red light district is around 6,5000 square metres and covers the following streets:

Prostitution is legal in the Netherlands.

This does not include street prostitution, and the work permits are not green cards; meaning that legal prostitution extends mostly just to EU citizens or permanent foreign residents.

There are no formal guidelines in existence in terms of STD testing. However, many clubs and brothels choose to have their sex workers screened regularly to protect them and their customers.

How is the red light district organised?

The organisation is the red light district in Amsterdam is one of the most fascinating parts!

While there is no hard and fast blueprint for where each ‘type’ of woman works in Amsterdam’s red light district, there is a vague sense of organisation when it comes to finding who you want to engage in sexual activities with. For example, around the Old Church area you will find hispanic and Black women; over the bridge you’ll find white women of Eastern European background, and over the next bridge are white women from all countries.

You will also find that different areas are organised according to the size of women. Larger women are often placed in a particular area, for example. This makes it easier for those who prefer a particular ‘look’ to find what they are looking for!

In 2017 a woman called Nariscia posted an article on Medium in which she talked about seeing a dingy side street, away from the cleaner, brighter parts of De Wallen, in which there were only black women in the windows. It was a dark side road with minimal traffic, almost hidden away. She explored the question of segregation within the legal sex work industry of Amsterdam’s red light district. She said, “in a country where it is legal, black sex workers should receive the same rights and privileges as their white counterparts. It seemed like they were pushed to the side to show they were less “valuable” and better left hidden away”. This is a nuanced discussion, but one that should definitely be touched on when considering how Amsterdam’s red light district is laid out for visitors and clients.

DID YOU KNOW: within the red light district there are also some blue lights. This signifies that the sex worker in question is transgender.

How much money is made in Amsterdam’s red light district?

Sex tourism can be profitable business.

Whilst in many countries, sex tourism activities are largely illegal, and thus very little money is raised outside of the individual worker’s pocket, the Netherlands is able to profit from this industry, largely through taxation.

Income for the workers

There is plenty of money to be made in the red light district.

Amsterdam is famous for sex work and cannabis, and tourists come from all over the world to engage in what we call ‘sex tourism’ – which you can read all about this here.

Sex workers in Amsterdam’s red light district rent their windows/cabins by the day. They pay the rent at the beginning of their ‘shift’. If it’s a slow day or night, they may have paid out more than what they’ve earned. But this doesn’t happen too often. Sex work and sex tourism is so popular in Amsterdam, that most days and nights are relatively high earners.

Generally, sex workers in the red light district charge 50 euros for 15-20 minutes. Additional time and services cost extra, and the bill can quickly add up.

Sex workers do not have to accept every customer; being self employed, it is up to the individual women who they choose to engage with. But of course the more clients they do accept, the more money they can make.

Income for the economy

The red light district generates over 2.5 billion euros for the Dutch national economy. This is in terms of sex work and drugs. This is a positive economic impact of tourism in the Netherlands.

Because Amsterdam’s red light district is so popular and offers a hedonistic escape for tourists from many other countries, the Netherlands is high on many people’s to-do list. From stag do trips to multi-couple holidays, 19 million+ tourists visit the city each year. There is no denying that the red light district is a huge pull for these people, many of whom live in countries where drugs and prostitution are completely illegal and come with huge risks, fines and more.

Is the red light district ethical?

There is, of course, always a big moral question surrounding sex tourism.

People have concerns about women in this line of work, with many worrying about whether these sex workers have been trafficked from other countries and forced to prostitute themselves in windows. But with all of the regulations surrounding sex work and prostitution in the Netherlands, this looks less and less likely.

Sex workers pay tax, and brothel owners often ask workers for health certificates before they will employ or rent a room to a sex worker. Everything is, for the most part, above board inAmsterdam’s red light district.

There is negative publicity when it comes to Amsterdam’s red light district.

It is often seen as seedy and degrading, and to counteract this, Mariska Majoor founded the Prostitution Information Center. The organisation now runs tours of the red light district to allow visitors to see the area for themselves without engaging in any sexual activities. It is a way to satisfy your curiosity without getting involved yourself. The tours inform guests about the working conditions and provide information that has changed many people’s minds over the years.

Ethics is something that comes up time and time again when sex tourism is discussed. And there is no right answer. Some locals aren’t happy with Amsterdam’s red light district and the sex on display; but it really is a catch 22. The city is famous for its lax rules surrounding prostitution and drugs, which is why people visit. And because people visit, the government are less likely to tighten the restrictions surrounding the activities that some people see as questionable…

As you can see, Amsterdam’s red light district is an important part of the tourism industry in the Netherlands. It attracts tourists from all over Europe and beyond and raises a lot of money for the Dutch economy. However, it is also subject to ethical concerns.

Have you visited the red light district in Amsterdam? What were your views?

The girls had the best summer! They were reunited

Remember my wagon purchase shortly before I left C

Why Is Alhambra Palace Famous? Situated on the Sab

The 30 best beaches of Brazil to visit

Do you want to know which are the best beaches of Brazil? Then you have come to the right place! Brazil has lots of things that make it a great country, but one of the top things is that it has so many fantastic beaches! Here are the top 30 beaches of Brazil that you...

Do you want to know which are the best Croatian beaches? Then you have come to the right place! Croatia is a beautiful country that is the perfect place if you're looking for a beach get-away, as all the beaches are spectacular and will make you feel like you're in...

Are you in search of nightlife in Goa? What are the best nightlife spots in Goa? Goa is a stunning part of the world. Famous for its beaches and fishing villages, it also has a fantastic party scene. So if that’s what you’re into, read on to find out about the best...

The best family hotels in Bali

What are the best family hotels in Bali? Bali is on everybody’s bucket list. Blue skies, white sand and endless sunshine; long days relaxing by the pool or exploring volcanoes, temples and more - there’s so much to do in this part of Indonesia, and it’s the perfect...

15 Best things to do in Florida Miami

Do you want to know what the best things to do in Florida Miami are? Then you have come to the right place! Miami is one of the most famous destinations in Florida. In fact, it's also the largest resort city in the entire USA - this means that there are plenty of...

25 Beaches On Oahu You Shouldn’t Miss

The beaches on Oahu are quite simply to die for! Oahu is the third largest island in beautiful Hawaii. It's got so many things to see and visit on the island, but most importantly, one of the best things about Oahu is its beaches! Read on to find out all about the 25...